On a night filled with emotionally powerful and oftentimes politicized acceptance speeches, viewers of the 92nd Academy Awards had their eyes (and ears) on high alert to see who would win their favorite award categories, and what they had to say.

With the price tag running some brands $2.6 million for 30-seconds of airtime, their ads are equally as important as the awards themselves. This year some brands decided to take a more unique approach, like M&M’s and Cadillac’s direct Oscars tie-ins, while first-time advertiser, Quibi, promoted its OTT streaming platform which is set to launch on April 6th, 2020.

We evaluated all of the national ads that ran during one of Hollywood’s biggest nights and gathered data from 500+ unique viewers across the U.S. with over 12,000 data points collected per ad. Below are some insights from the ads that stood out during the program:

With a total of five 15-second ads airing throughout the night, M&M’s showcased its product during the live event, allowing the brand to stay top of mind with viewers. M&M’s set of ads also played with a contextual tie-in to the Oscars — one spot directly showed support to viewers of the event, while another congratulated those that made it into work that day (referring to those in Hollywood that had to grind it out that Sunday evening). The iconic M&M’s characters stood out as the best thing to viewers, allowing for the humor in the ads to take the spotlight: 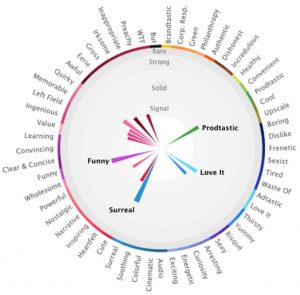 Having actual customers opening up about their experiences with a brand can oftentimes be empowering, and Verizon does just that in “Reasons: Bailey.”

Sprinkling in just the right amount of Heartfelt connection, “Reasons: Bailey” underscored how integrating brand offerings with a strong message can leave viewers with a sense of empowerment. In this spot, Verizon featured an authentic customer, Bailey, opening up about her experience with the brand and how it helped her get through rough times when her father was diagnosed with cancer – resulting in Solid signal on our Empower metric (a level only seen in 2.78% of all ads): 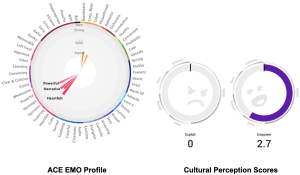 Google’s 60-second spot “Find Your Scene” tied in directly with the awards night, showing off different ways to use Maps – like finding the filming location of iconic movie scenes. One part of this ad even included the famous stairs from the multi-award-winning movie, Joker. Accompanying the Visual Scenes that 22% of viewers selected as the Single Best Thing about the ad was the catchy music from Hall & Oates’ “You Make My Dreams Come True”, with 14% selecting it as the best thing.

Google tugged at viewers’ heartstrings once again with a cutdown of it’s 90-second Breakthrough Super Bowl ad “Loretta.” It was clear that this emotion carried over to the Oscars, with the 60-second version maintaining its spot as the most Heartfelt of the night.

The images below reveal the contrast in emotion that came about in the 2 spots from Google: 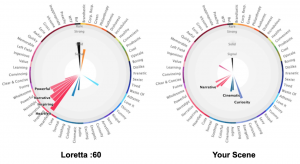 Adobe – Creativity For All

During the biggest night for an industry that flourishes off the brilliance of creative minds, Adobe aired “Creativity For All,” a spot filled with Cinematic and Colorful visuals that were selected as the Single Best Thing by 33% of viewers (vs. the 18% Tech industry norm). Gene Wilder’s “Pure Imagination” set the tone, which 14% of viewers found to be the best thing. The mind-bending scenes blended seamlessly and integrated famous faces like Malala Yusufzai and Billie Eilish. The spot represented the brand well, with 8 out of 10 viewers properly naming the brand for a product that isn’t necessarily widely used.

Viewer verbatim comments indicate how the stunning visuals propelled the success of “Creativity For All”:

“I love it. It is visually mesmerizing! Stunning. Its a creative journey that pays tremendous tribute to the artists features. And Gene Wilders’ “Pure Imagination” is perfectly nostalgic.” Female 36-49

“Hold on to whoever created this ad. It was beautifully artistic and the music choice was perfect. I really enjoyed it and I think it is the best ad I have seen in a very long time. I would use your products if I had the need solely based on what I saw in this ad.” Male 21-35

“At first I was not sure what the ad was about. Eventually, I understood that the graphics were creations and thought that it was very cool. The possibilities of all the different types of creative outlets is amazing. This brand does a great job to capture the creatives that want to take their designs to another level.” Female 36-49

Disney+’s “Come Together” had a seemingly perfect fit to a night jam-packed with awards given to movies that entertained and shattered glass-ceilings throughout the year. With the Nostalgia emotion being evoked at rare levels, it’s no surprise that this ad went high and above the norm on most component scores (norm indicated by grey area):

91% of viewers showed brand recognition of Disney/Disneyplus, further establishing that viewers have an ingrained connection with the brand as a whole.

It’s no surprise that the brand-centric visuals combined with an action-packed storyline led to the overall Cinematic experience for viewers in “No Barriers.” The spot also showed solid signal for Cool and Upscale (no surprise given the scenes seen throughout the ad),  and although remaining within category Lux Auto norms, the ad stood out specifically for its Visuals and Music – both coming out on top as the Best Things to viewers (along with the brand itself). 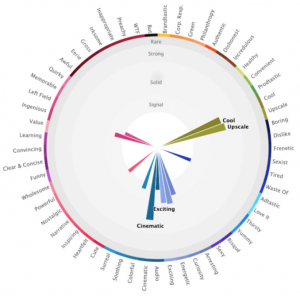 Staying true to the theme of the night (celebrating movies), it’s great to see that the brands behind these creatives were able to showcase the value of their products while maintaining an aura of entertainment. Although the audience may not reach the peak viewership levels of a cultural event such as the Super Bowl (which reached 102 million viewers), Oscars night still provides an opportunity for brands to engage with viewers during a live event.

Not Quite in the Game