Traveling, Black Friday, Turkey Trots, Thanksgiving parades — just some of the things that seem to be the hot topic at the dinner table this time of year. Putting that all behind, Campbell’s “Pass the GBC” reminded viewers of the true essence of Thanksgiving: passing around the Green Bean Casserole to share with loved ones while listening to Bing Crosby’s 1942 I’ve Got Plenty To Be Thankful For. In fact, the music in the ad had such a lingering impact that 21% of overall viewers chose it as the Single Best Thing (in contrast with the 4% packaged foods norm from the last year).

Scoring strongest on our Nostalgic emotional metric, Pass the GBC’s ambiance and tone throughout brought back holiday memories and flashbacks for viewers. At a time of year when brands want to capitalize on family moments and nostalgia, Campbell’s dominated with Pass the GBC, scoring fifth highest in the last six months for our Nostalgic metric.

And no wonder the spot gave people reminiscent feelings of times with family and friends — the original green bean casserole was originally cooked up by Campbell’s test kitchen chef Dorcas Reilly in 1955, and has had such a prominent effect on the holiday that an estimated 20 million families are expected to enjoy it this Thanksgiving!

The brand has been creating nostalgic feelings in their last few spots, with a similarly produced ad focused on the classic combo of grilled cheese and tomato soup edging out Pass the GBC for the number two spot on the Nostalgia list behind a Nintendo ad. 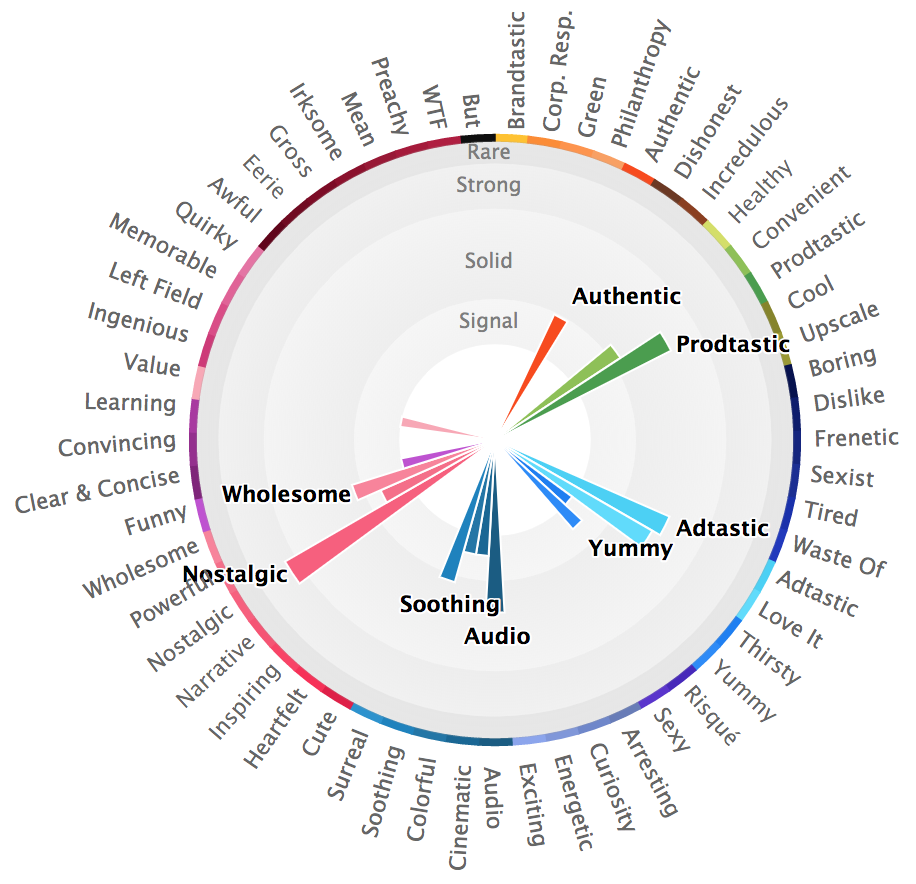 Cream of Mushroom Soup’s critical role among Thanksgiving dishes helped Campbell’s pull off the perfect balance of a sentimental yet product-forward spot. So much so, the strongest emotional connection after Nostalgia was directed towards the product itself (measured by our Prodtastic EMO).

Verbatim responses below reveal just how much of an emotional impact the ad had on viewers:

“The music made it! I loved the visual of watching the bean casserole being plated up from above. super cool look. old time song to a soup that’s been around for a long time used in a traditional holiday side dish that is still current today made this ad very cool.” Female 50+

“This ad was very comforting. It was like Thanksgiving at grandmas house. The togetherness…the quality time with those we love most. The food we look forward to ALL year. This all jammed into a short commercial. I could almost smell aromas coming from the dinner table. It makes me very impatient to spend the holiday with my own family!” Female 21-35

“Bing Crosby singing a song about being thankful in an ad for a main ingredient in a dish famously served on Thanksgiving – NAILED it! This is my kind of ad…not pushy, or to much going on. You picked great music and let the product speak for itself.”  Male 36-49

At 90%, unaided Brand Recognition was above norm. In addition to “Campbell’s”, about 25% of respondents mentioned some variation of the product in their response (“Cream of Mushroom” “Mushroom Soup”) indicating the product’s strong impression on viewers.

In addition to evoking emotional reactions from viewers, the ad also nailed it on our rational, quantitative scores, with Pass the GBC scoring in the top 1% of all ads in the last year for Likeability and top 2% for Attention.

Campbell’s certainly has the benefit of being an ingrained part of so many Americans’ Thanksgiving celebrations, but leveraging that datapoint and combining it with appealing production and the perfect song to make people really feel takes talent.