The Most Inspirational Ads from Pyeongchang 2018

The Pyeongchang closing ceremonies wrapped up an exciting few weeks of competition. Emotions were high throughout the course of the games, with brands capitalizing on that feeling in their creative as well.  Coverage of the competition tends to focus on the backstories of the athletes, with NBC trying to give its audience a reason beyond simply pride of country to root for the athletes. The Olympics and Olympians are nothing short of “Inspirational,” and one of the best ways for advertisers to connect with the audience is to harness that emotion.  However, emotional resonance is not guaranteed when most advertising messages and the Olympics themselves are portraying the same thing.

Brands have taken a more corporate approach to the Olympics by attaching their names to athletes and their stories of hard work and determination.  Of the ads from official Olympic sponsors, 40% prominently featured one or more athletes, with Samsung even dedicating a 2:00 spot to snowboard star Chloe Kim.  While not every brand chose to have a spokesperson (people), most focused on at least one event in their ads, with the most clips from snowboarding, followed by figure skating and skiing.

The following list of most inspirational Olympic ads was derived using our new product, Ace Emo. It’s based on a system of word/phrase vector embedding that allows us to project each ad onto a set of concepts/emotions, based on the actual verbatim comments from viewers. The ads below represent the most inspirational creative that successfully hit home for viewers.

The Most Inspirational Ads from Pyeongchang 2018:

* These ads achieved the highest breakthrough scores among 2018 Olympics ads.

Toyota continued its mobility messaging during the Olympics with powerful stories about adapting to challenging circumstances. In a clever and Attention-grabbing manner, “Good Odds” depicted Lauren Woolstencroft’s fight against the odds to become an 8x Paralympic gold medalist. The music and the visuals worked together to deliver the impactful message, “Never Give Up.” Aside from scoring significantly above advertising norms for every metric we measure, the spot was also the Top Breakthrough and Top Message-Forward Ad from Super Bowl 52. Represented in the emo word cloud below, 75% of viewers used emotional terminology in their verbatim comments about “Good Odds,” with most related to ‘heart’ emotions (such as ‘inspiring’). 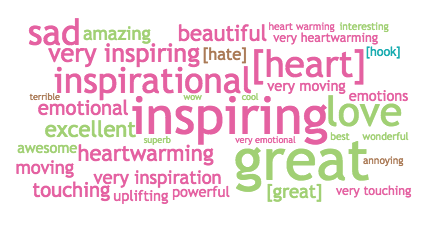 “Runner” by Toyota was driven by Breakthrough and Change, which shows Toyota successfully conveyed its new direction to viewers. The contrast of the vibrant colors and dark shadows, combined with the narrator’s message had viewers engaged throughout. Despite the ad’s length, it received a high score for Watchability (among other metrics) showing viewers’ willingness to watch again.

Comcast shared two inspiring stories in one with its spot featuring Rico Roman, a U.S. army veteran with a purple heart turned Paralympian with a gold medal. The 1-minute ad is also one of the most heartfelt and Top Breakthrough spots from the Olympics, achieving some of the highest scores for Attention and Likeability. Combining elements of a military hero, American pride, and an uplifting message, there was very little disagreement among viewers about the success of this ad, earning it a low polarity score of 34. 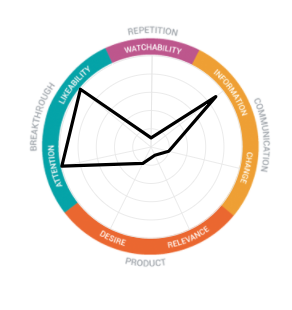 While viewers tend to connect well with the athletes’ stories, there can be a disconnect from the stories to the brand. Brands also walk a fine line between spreading an inspirational story and capitalizing on the athletes. Comcast’s second ad on the list, “3am in Afton,” continues the home-pride theme with a narration by 2018 Olympic Gold Medalist, Chelsea Diggins. Her hometown of Afton, Minnesota, gathers at the less-than-ideal hour of 3am to watch her in a cross country skiing race. Viewer brand recall was higher for this spot compared to the first as it had a stronger brand tie-in with the storyline.

Samsung’s “Human Nature :30” was powered by Relevance and Likeability. The motivational message, “Do What You Can’t,” was well received by viewers who related to the scenarios portrayed and saw the clever connection of the tagline to VR. They named the ‘Message’ the top Single Best Thing about the ad. By showcasing Samsung’s VR capabilities, viewers also thought the company represented innovation and a Change in positioning.

Continuing its “Thank You Mom” campaign for the Olympics this year, Procter & Gamble, “imagines what the world could be if we all saw each other through a mom’s eyes.” The ad scored well with viewers among different ages and genders, but particularly well with females who can relate to the role of mother. Viewers found the ad relevant as it highlights the powerful, and universal, relationship between a mother and child. As a result of this, the ad evoked an emotional response from 69% of viewers. 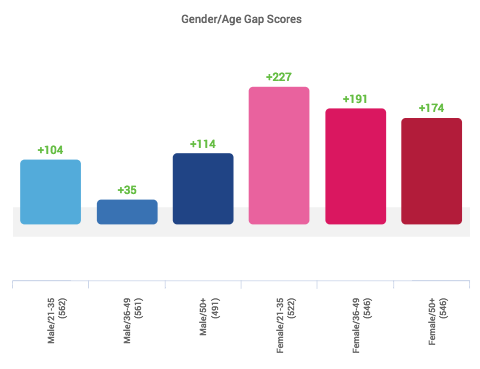 Four different athletes come together to share what they think makes the Olympics so special in Coca-Cola’s creative. The message stood out the most to viewers as the Single Best Thing, followed by the characters, and then the visual scenes. However, the emphasis on athletes, and not the product, did not do much to change viewers’ purchase intent after watching.

Viewers found Samsung’s ad starring Chloe Kim highly Informative, as it gave a behind the scenes look into her life and how she made it to the Olympics. The touching story about her father’s dedication to her passion and dream was a reminder to audiences of the immeasurable amount of support parents provide. The emotional storytelling led 41% of viewers to indicate they very likely to share the ad with their circles of influence. Despite the ad’s focus on Chloe, 86% of viewers successfully recalled the Samsung brand. 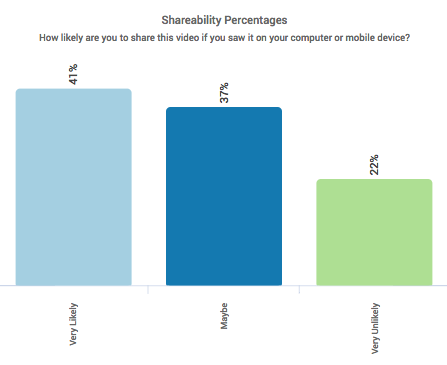 Refraining from Olympics-related content, General Electric made a relatable ad by emphasizing its impact on the lives of people all over the world in “What Matters.” The visuals worked together with the message to show viewers what inspires General Electric to continuously innovate new and old technologies. The ad resonated best with females age 36 and up, who found some of the scenarios relatable to their own lives.

Dick’s Sporting Goods’ campaign showcased different ‘contenders’ for this year’s Olympic games. The “Adrian Adams” spot is the shortest on the list, but the visuals and Adrian’s narrative pack a lot of inspiration. The ad was driven by Watchability and the Likeability of Adrian’s character and his message. However, as a result of the length and lack of branding, recall was low. Some viewers mentioned in verbatim comments they even missed the brand’s logo at the end.

There are many ways advertisers can inspire, even during the Olympics, but a powerful message is indispensable. Each athlete has a motivating story. As for all celebrity use, finding one that relates to your brand and audience will see stronger resonance. At a time where advertising has to go beyond simply entertaining and actually make an emotional connection, these brands achieved great success in Pyeongchang 2018.