Trust is an increasingly important factor in today’s consumer-brand relationship, with 81% of respondents in the Edelman Trust Barometer answering that before they purchase, “I must be able to trust the brand to do what is right.” Long-lasting trust is built through consistently authentic and relatable brand narratives that fuel positive and encouraging emotions.

As such, finding a core truth helps advertisers establish a trust-building narrative. But, it’s how they communicate that narrative that makes or breaks its success, which is why we developed our Cultural Perception scoring system that quantifies both the positive and negative impact of statement-making advertising. Ultimately, brands can assess the risks and rewards of achieving emotional connections as they relate to storytelling and trust-building.

For Q3, we’re recognizing the ads that scored highest on the Empower metric from our Cultural Perception scoring system. Ads that are Empowering represent 23% of all ads Ace Metrix has tested.  But by scoring in the highest level of Empower, this list represents less than 1% of all ads. Additionally, each spot scored very low on Ace Metrix’s Exploit metric indicating there was minimal risk of negative reaction from the general public.

Congratulations to the following brands for finding unique and empowering ways to connect and build trust with consumers!

The Most Empowering of Q3:

These ads delivered messages that universally encouraged, inspired, or motivated. They go beyond Likeability, resonating with viewers’ reward systems. In a blink of an eye, this unexpected, uplifting response to advertising influences viewers’ emotional reactions. 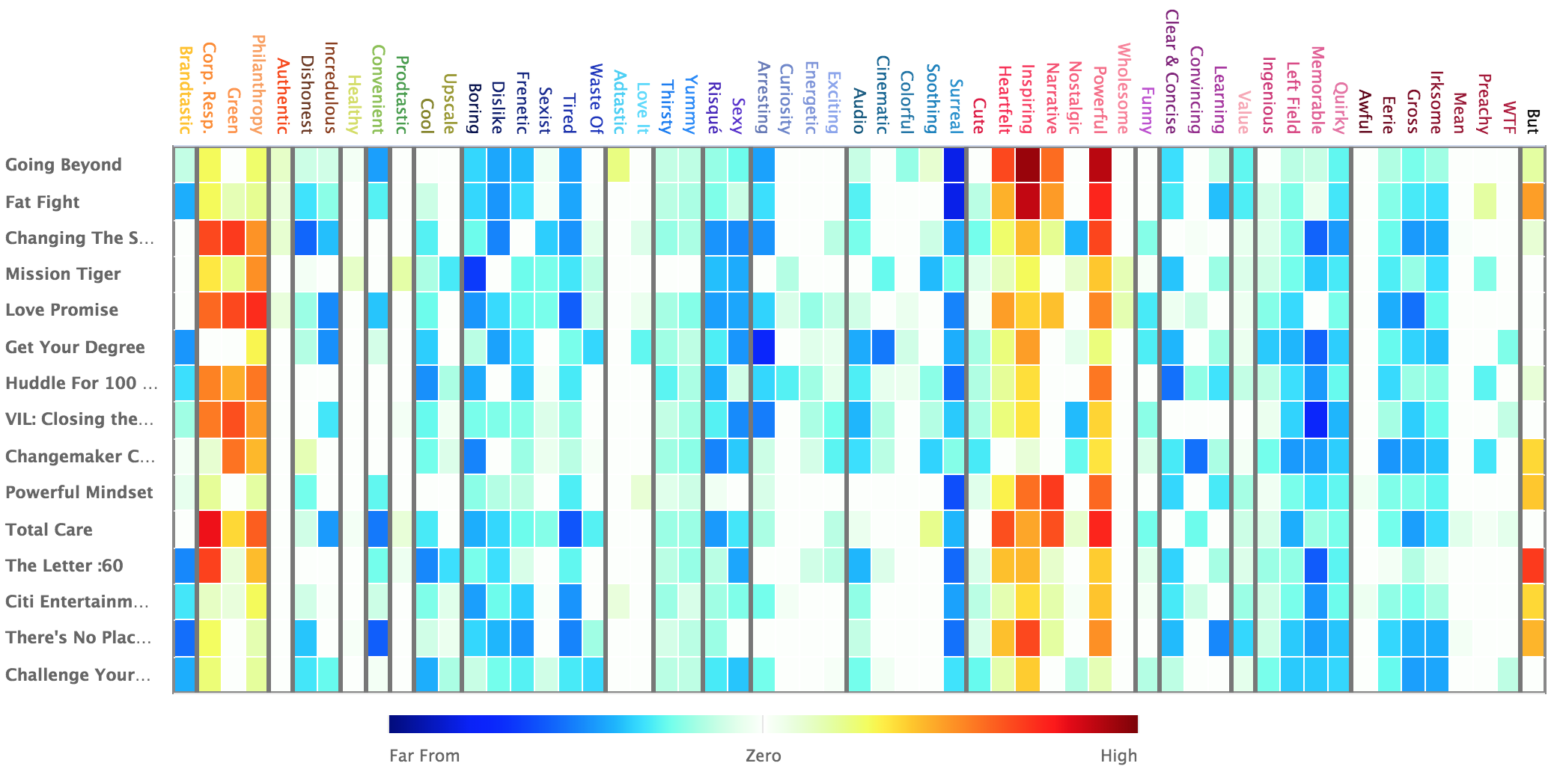 As such, viewers formed positive emotional connections with the most empowering ads, firing signal on metrics like Inspiring and Powerful. Moreover, viewers exhibited resonance with and appreciation for each brand’s social initiative, setting off metrics like Corporate Responsibility and Philanthropy. These emotional patterns are evident in the heatmap above, where the shade of orange indicates strength of signal.

Coming off the tailwind of a strong earnings report, Nike earned three spots on the list of the Most Empowering ads last quarter. It goes without saying, the athleisure apparel and footwear brand knows its consumers, maybe even better than they know themselves. All three ads stem from its “Sport Changes Everything” campaign, and each detail the odds-defying accomplishments of unconventional athletes.

Beyond Cultural Perception, the “Sport Changes Everything” ad above also stood out in its ability to connect emotionally, earning the highest score on our Inspiring metric in Q3.

Ads from Frosted Flakes and Dick’s Sporting Goods highlight the youth sports budgeting crisis while pledging to combat the issue with funding and scholarships. The “put your money where your mouth is” approach in both ads created a sincere link between the cause and each brand, as well as an incentive to purchase, particularly for “Mission Tiger,” the strongest positive purchase intent among the most Empowering ads, at 58% for both: 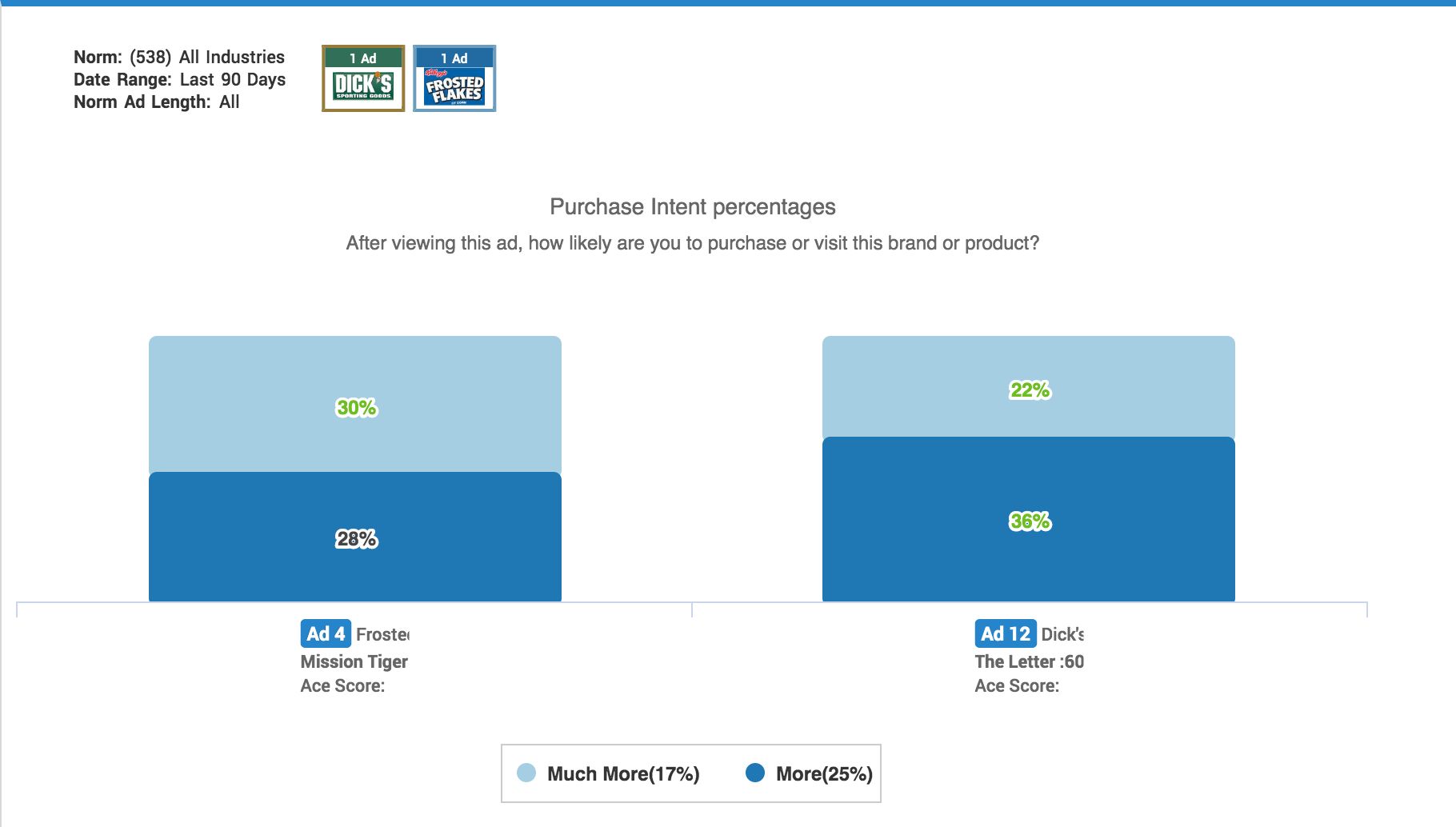 Half the ads on our list leverage athletic narrative, where inspiration and motivation comes naturally and underdogs abound. Others focused on education, with Verizon and IBM sharing how they’re preparing disadvantaged youth for a tech-focused future. Meanwhile, Southern New Hampshire and Purdue University portray how they help individuals unlock their untapped potential. Additionally, there are a few general do-good ads from Subaru, T-Mobile and Hyundai where they bring to light their community contributions.

(Click on the ad titles to watch each ad)

Nike hasn’t shied away from taking a stand in their commercials over the last few years, and they weren’t just Empowering in Q3. In their tribute to the USWNT, Nike pushed the idea that the women on the team stood for more than just sport, and that didn’t agree with everyone. “Never Stop Winning” came out just days before Nike’s “Sport Changes Everything” campaign, but the ad’s reception was a stark contrast to the the most empowering ads above.

Respondents found the ad nearly as Empowering as the ads on our Best Of list, however, it was counterbalanced by nearly equal scores of Exploit. Many of the complaints about the ad surrounded the long held issue many people have with mixing politics and sport. Additional negative feedback came from the fact that Nike has taken a stand before, specifically through their Colin Kaepernick ads.

“I didn’t like it. as a male I do support women but every single time I turn around this kind of stuff is thrown in our face. its politics in sports people don’t want that. put on a good show and people will watch but when you inject politics into it like this ad clearly has it is a major turn off. everything that has to do with some sort of womans entertainment this is the route every single company seems to take. ask yourself has it worked?”

“I believe that Nike does not care about the message, they just care about how much money they can make by whom the message reaches. Nike, like many other companies are pandering and it’d be better if they just sold a product instead of trying to sell the consumer to the product. It’s insulting.”

“I liked the black and white of the ad. I liked the overall message about women doing well and breaking barriers but I think the whole “women’s rights” issue is being completely over played in our country right now.”

“I cannot stand the ad – Nike has gone too much into politics and it really turns me off. I will never buy Nike again. I don’t agree with the values that it supports.”

While for some brands this level of risk would cause hesitation, Nike has asserted themselves as a brand that takes a stand and doesn’t back down. Thanks to overwhelmingly well-received ads like those from “Sport Changes Everything,” Nike can run with calculated risks like “Never Stop Winning” and its Kaepernick campaign and still come out on top, both in perception and at the bank.

Ads That Will Have You Thirsty for a Cup of Joe