In our release of the top performing ads from Q2, we recognized the most Heartfelt and Funniest ads, as well as those that stirred the most internal conflict. Unlike the first two, that last list is not straightforward. Based on our But emotional metric, the cause of this reaction is unique to the ad itself.

Separate from our Polarity Score that measures disagreement between respondents, our But metric picks up on internal conflict among viewers. It indicates that an ad is pulling individual respondents in multiple directions as a result of having both agreeable and disagreeable aspects. Sometimes it is simply a matter of execution (eg. length or music) while often times it is more complex. About 13% of all ads in our database generate this reaction.

Past creatives that have sparked this reaction from viewers to the highest degree include notorious ads like Nike’s “Dream Crazy” and Gillette’s recent take on toxic masculinity. The top ad on Q2’s list joins these ranks as one of the most But ads of all time with a score of 10.

Note: several ads are long form which is common for “But” ads where some individuals might like everything about an ad save for the length.

All to the tune of Simon & Garfunkel’s “The Sound of Silence,” Volkswagen addresses their Dieselgate scandal while also ushering in its new era of electric vehicles in “Hello Light.” The beginning of the ad was the source of internal conflict for most viewers, but the exact content that triggered our But metric varied. Some thought the darkness played out too long making it boring and hard to follow, but appreciated its symbolism in the overarching message:

“it’s a mixture between I like and I don’t, I like the idea behind and the last phrase of the add but it seems too dark” Female 50+

“I felt that the ad had a bleak, dark tone for a bit too long, and the visuals themselves were very dark and unexciting. But I really enjoyed the end of the commercial and the message it had. I think I just would have preferred if the bleaker tone didn’t last quite as long. I do, however, think the song choice was really excellent.” Female, 21-35

“There is way too much darkness in the ad, which I understand correlates to the message and the music, but it is just really unappealing. Grim darkness not only doesn’t get my attention, but it actively turned me off before I even knew what the product was.” Male 50+

“Initially I thought the video was just too dark until I realized the message at the end. The brand is emerging from the darkness. I like it!” Female 50+

And of course, other viewers were left with a bitter taste after the mentioning of the scandal even if they were still able to enjoy the creative execution and/or the new (green) direction of the brand:

“it is a thought-provoking ad, but look vw has been ruined by the emissions cheating scandal and will never again be a serious car maker.” Male 50+

“It doesn’t make me trust the brand again but at least they’re moving in a new direction.” Female 21-35

“Sound of silence is a great song. The visuals were also impactful. I still don’t trust VW.” Female 21-35

No stranger to our But metric in recent times, Gillette continues its social stance marketing efforts in “First Shave, The Story of Samson.” The inclusive Message, named the top Single Best Thing by 38% of viewers, successfully conveyed that Gillette is moving its brand image in a new direction.

Looking into viewers’ voluntary verbatim comments about “Samson’s First Shave,” the But reaction stemmed from several scenarios. Agreeable aspects for most were the inspiring storytelling and/or the LGBTQ+ representation from a well-known brand. However, conflict arose from either political ideologies, confusion or a sense of exploitation.

Featuring soccer star Mia Hamm and Mallory Pugh, Gatorade’s “Every Day is Your Day” delivers an inspiring message about female empowerment through poetic storytelling and cinematic CGI. Viewers named the Message the top Single Best Thing about the ad, followed by the Visual Scenes. The ad content itself is targeted towards soccer fans therefore losing appreciation among those uninterested in the sport. However, length was the main issue for a lot of viewers, as shown in the word cloud and verbatims below:

“Overall, this ad was very good. I liked the message it was very inspiring however at some parts it seems as if it was dragged out too much and need to come to an end sooner.” Female 16-20

“I liked the message and how epic it felt, it did feel very long though. Mostly the fantasy sequence with her dribbling through all the different things. Slow pacing dragged” Female 21-35

In “The Legends,” Monster Energy honors Supercross athlete, Jeremy McGrath. The ad ties in strong brand elements from the logo at the beginning, the green color throughout and the focus on an extreme sport like Supercross. The But signal originates from the fact the ad is targeting a specific audience, which is also evident in the weak Relevance score.

Last on the list of ads that stirred up the most internal conflict comes from the brand Gay Beer in celebration of Pride Month. At first “Gay Beer World Pride” seems like it is portraying a heterosexual relationship with stereotypical roles, but it comes to many viewers surprise when the mysterious “Babe” shows up and it is a man. The same disagreeable aspects that resulted in a strong But reaction also sparked negative emotions like Sexist, Incredulous and Mean. Those aspects were the name of the brand, the initial impression of sexist stereotypes, or the viewer’s own political/religious beliefs. 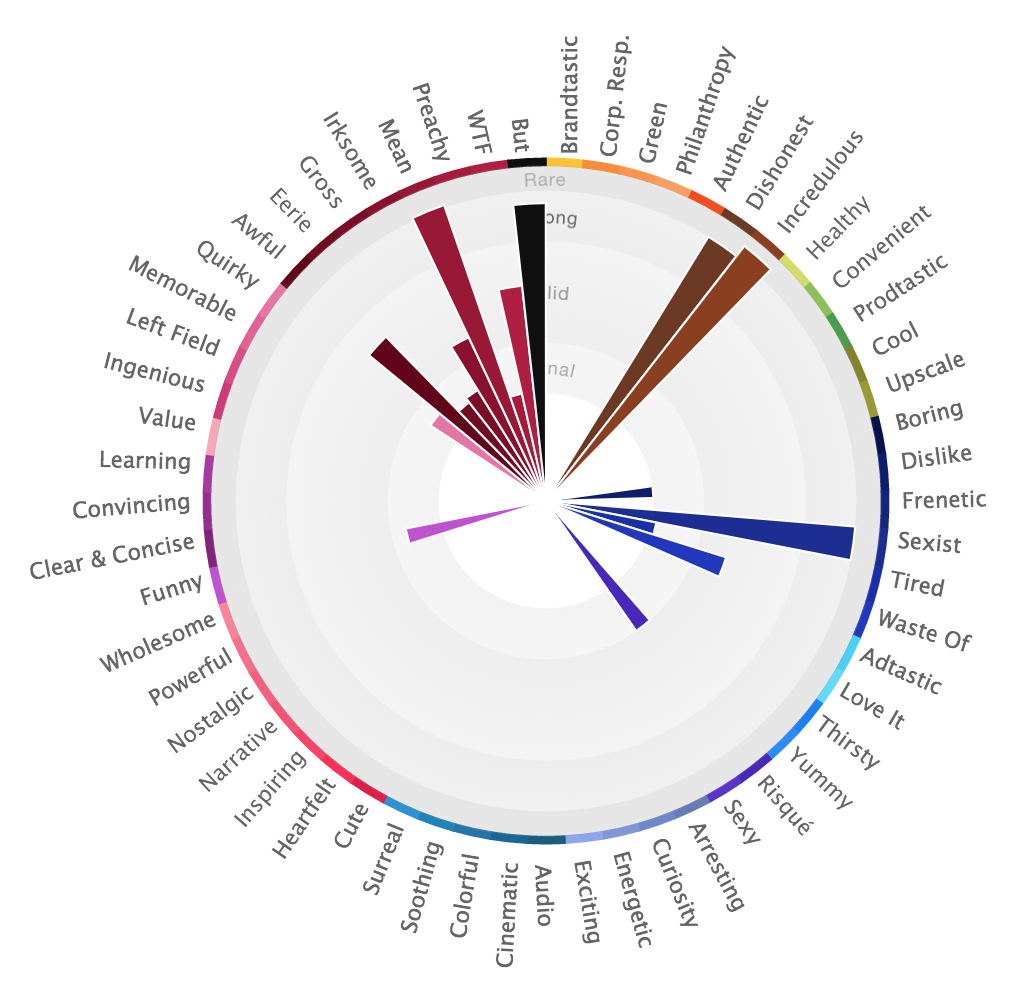 As the list above proves, our But reaction is unique to each ad. However, it often stems from execution, confusion, divisive issues or a combination of the three. Each of the ads above had both positive and negative aspects that sparked internal conflict.