The YouTube Ads Year-End Leaderboard consists of the ten most popular paid ads uploaded during the year.  YouTube views are inherently self selected – meaning those people chose to watch it. To be among the top ten of all ads viewed online in a month is a great achievement and speaks to the ability for that ad to resonate with a particular audience. But to be among the most popular ads of the year is truly a mark of creative excellence.

#1 Evian Baby and Me

The Evian babies continue to deliver – years after their first installment of the roller skating debut (68 million views and counting).  Towering Likeability and an Attention score over 800 speak to the ads strength, while a lack of Information weighed down the Ace Score somewhat.  From a gender age perspective, everybody loved the ad although there is a clear skew female. 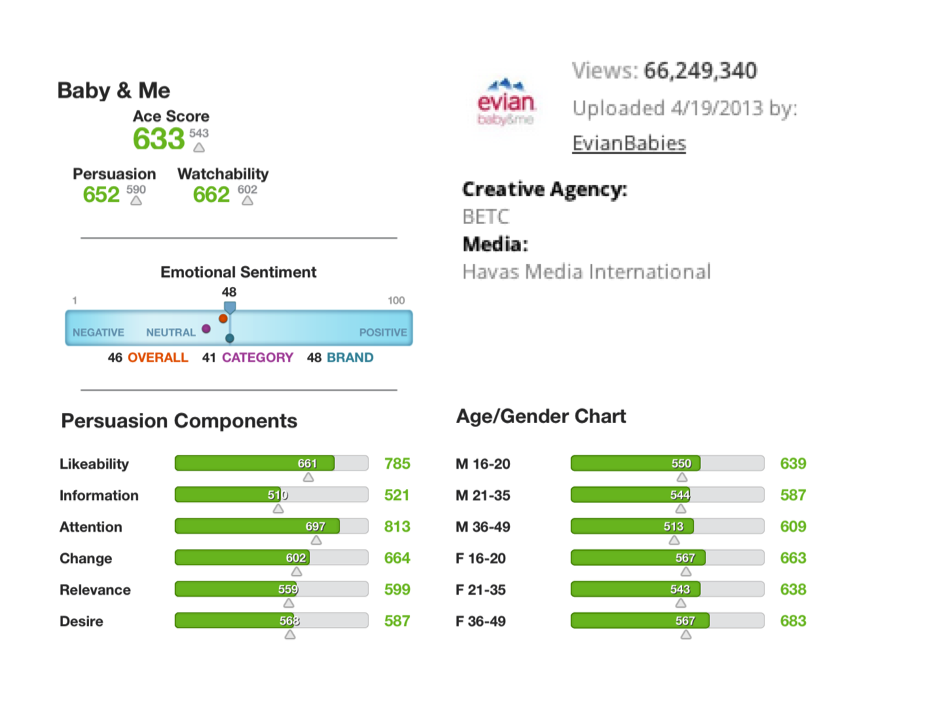 We have already written pretty extensively on the cross-over capabilities of this Dove ad but the 59 1/2 million views speak volumes for this three minute installment.  It too has a female skew, but cruses the skin norm with males, delivering high 500s and low to mid 600s depending on the age break.  Towering Likeability, Information, Attention and Relevance mark the success of the ad, while a strong Emotion score adds an additional layer. 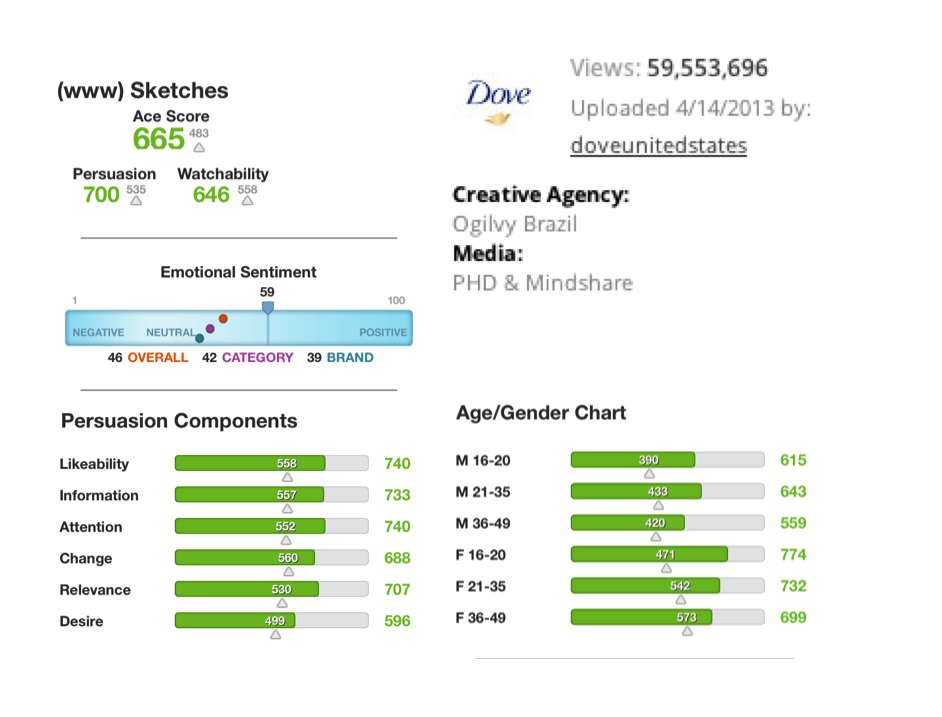 #3 Microsoft Explorer “Child of the 90s”

Microsoft’s “Child of the 90s” hits on all cylinders with superb Relevance and Attention scores – both breaking 700. Despite approaching the 2 minute mark, the ad earns a Desire score 16% above the technology category norm.  The 21-35 age group responded best to the ad. 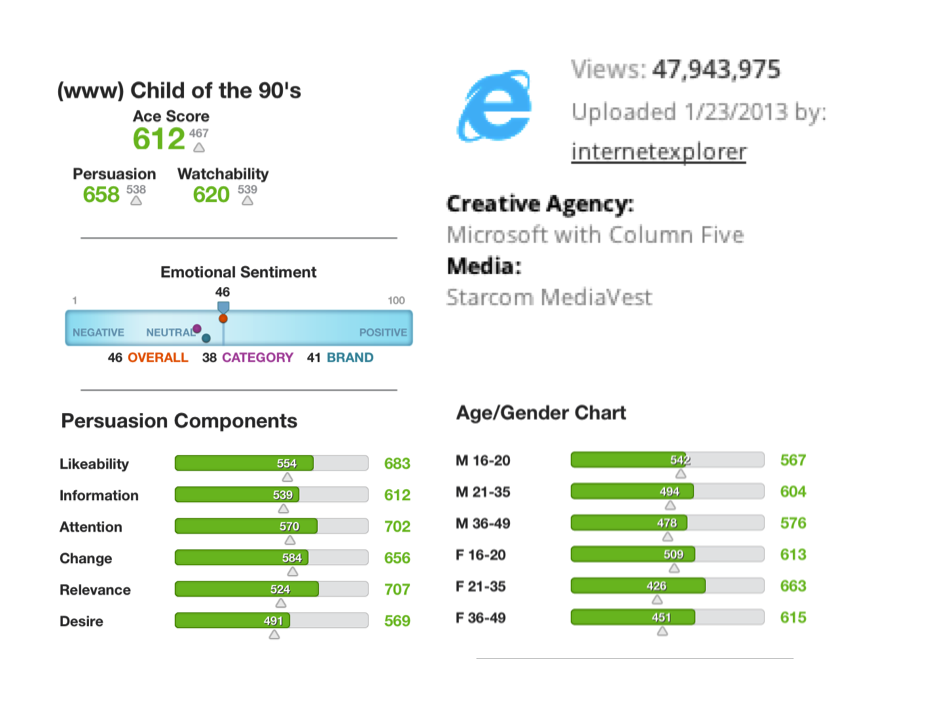 Pepsi’s “Test Drive” performed well across gender and age demographics, skewing older and unsurprisingly working even better with men than with women. A whopping 27% of respondents said the ad was “funny” and while the brand wasn’t center stage, 8% called out “pepsi” by name. 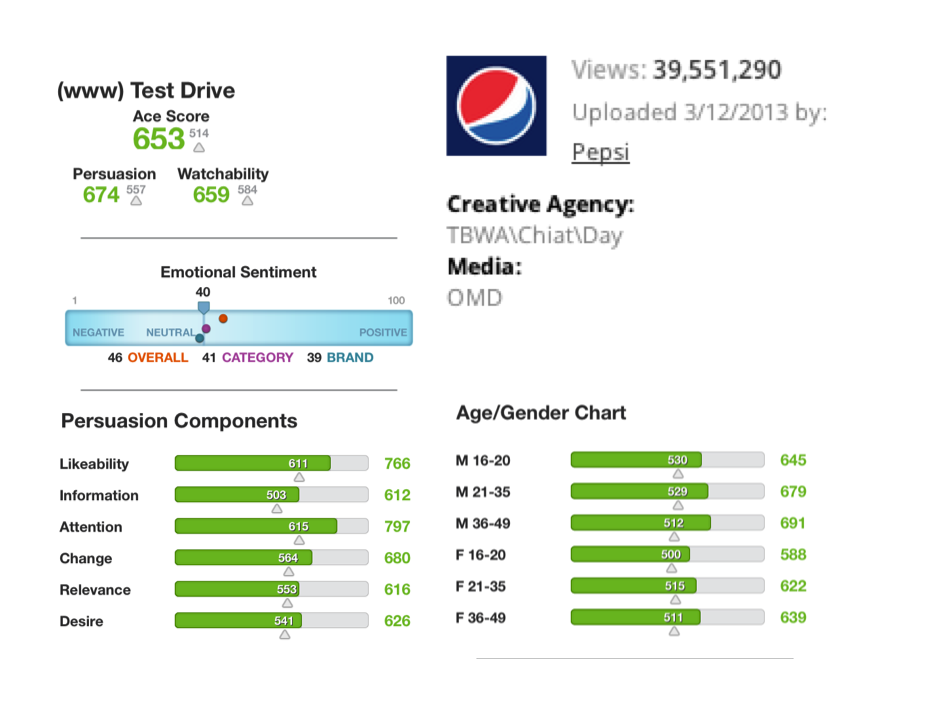 This is not an ad we would typically score since there is a slim chance it would ever attempt the leap to television. The 2:15 ad captures the Attention of viewers – breaking 700, however Likeability plummeted nearly 100 points below the average ad. Men enjoyed the spot better than women generally speaking…but the 50+ crowd fell well below norm. 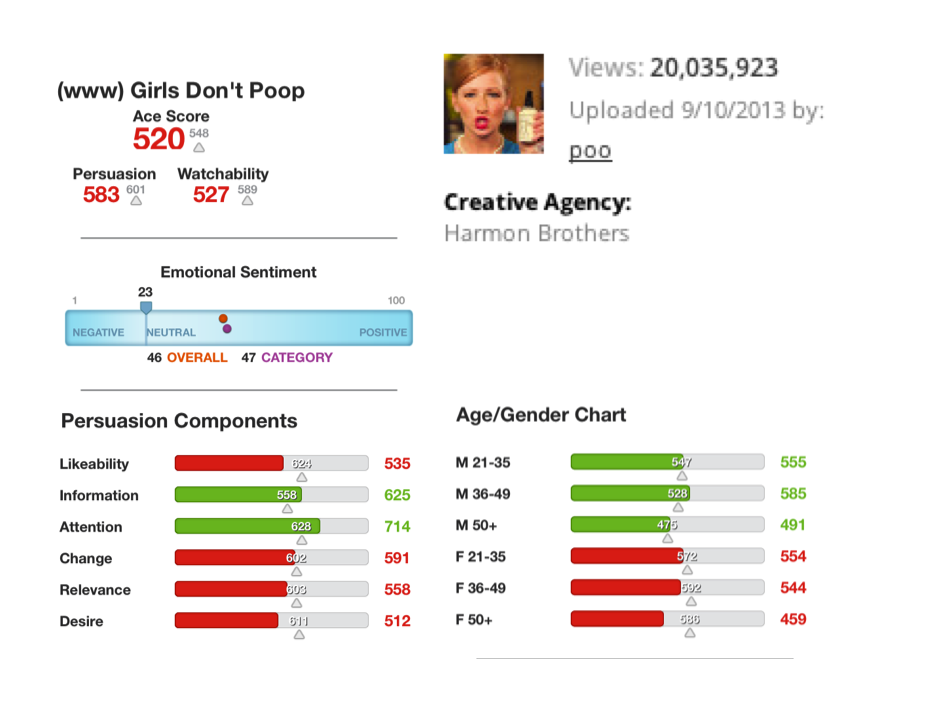 K-Mart’s “Ship My Pants” is a great example of an ad that was introduced online and had the chops to make it on television. The ad posts towering scores in retail, a category that does not usually see ads in the high 500s unless they have a philanthropic angle.  Broad popularity is the benchmark of success here – even grumpy 50+ males get into the act… 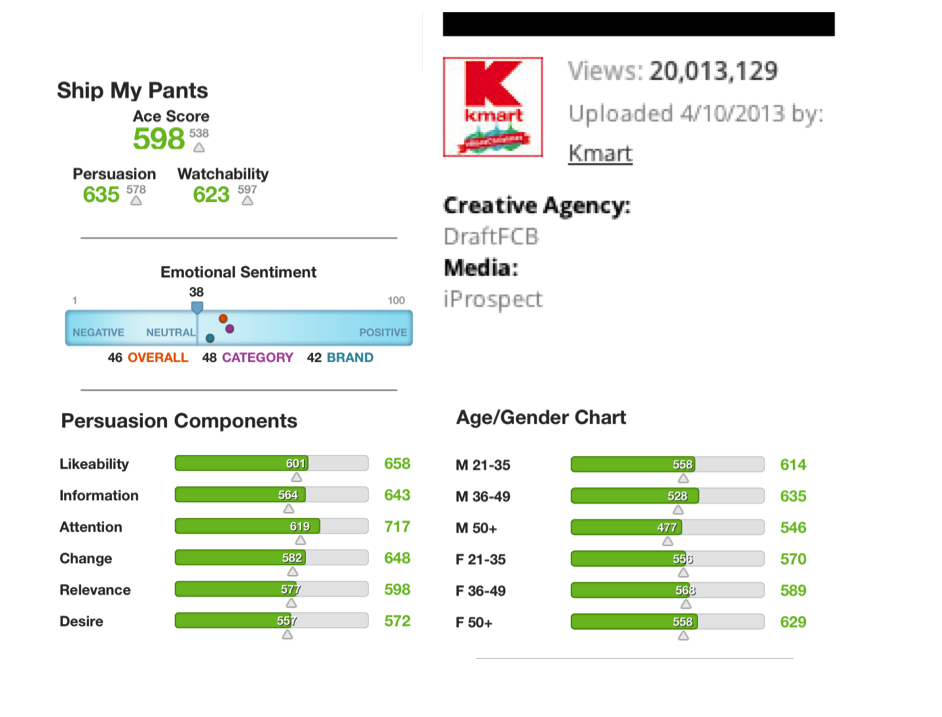 Geico’s Hump Day phenomena has plagued our office as I’m sure it has so many others – Wednesdays will never be the same. With towering Likeability and Attention scores this is one of Geico’s most effective ads of the year. Twenty-three percent of consumers called the ad “funny” and 18% name “Geico” – a typically challenging brand name for consumers to spell. Men 21-35 scored the ad 19% above the overall average and 26% above the Auto Insurance norm. 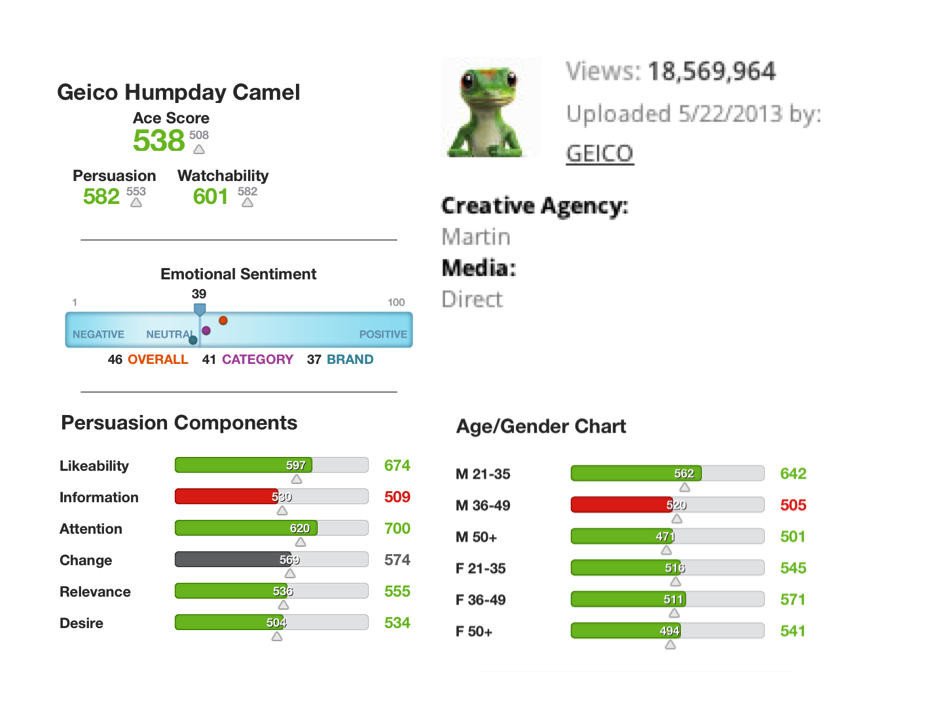 Ram’s “God Made a Farmer” ranked 6th among Super Bowl Auto ads and 16th overall. In a year were so many of the ads were leaked or previewed online prior to the game, this Ram ad premiered during the game but quickly became an online shared ad and a hot topic of discussion. The mesmerizing voice over contributed to the ad skewing older – with many of the younger demographics not recognizing the celebrity while 13% of the 36+ crowd mentioned Paul Harvey by name. 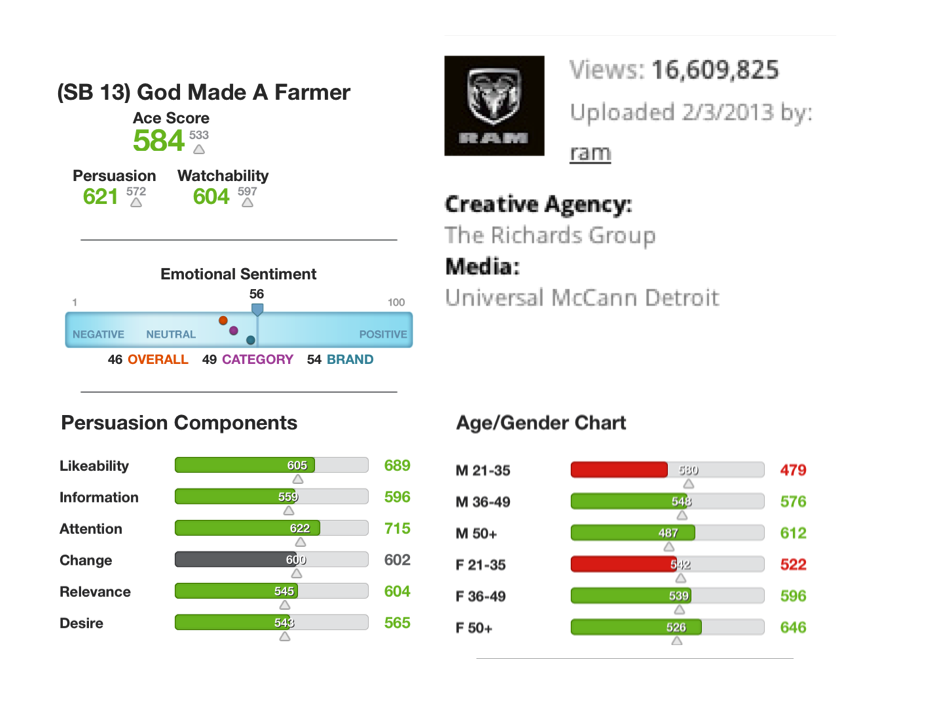 Quite the controversial ad online when it first posted, Volkswagen’s Super Bowl spot earned a sub-norm score of 426. Women scored the ad 6% above men and 10% above the overall norm but it was men 36-49 who scored the ad highest, 18% above the non-lux auto norm. Seventeen percent of respondents called the ad “funny” while another 8% mention the “accent” as “annoying” (3%), “stupid” (3%), and offensive (1%). 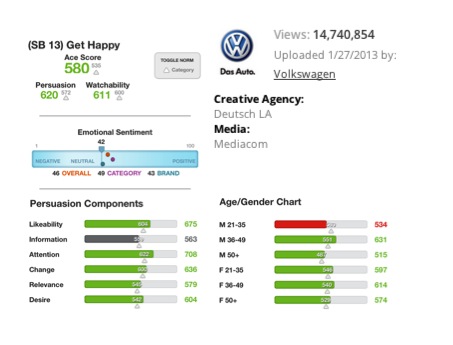 The third Super Bowl spot to make the Year-End Leaderboard, Audi’s spot ranked 5th among Auto ads and 14th among all Super Bowl ’13 ads. The ad was previewed online with a series of possible endings of which viewers voted for this one to be featured in the Big Game. We scored all of the ads as soon as they posted, each with a unique panel of 500+ consumers (like every ad we score, every day) and this version performed best from an Ace Score perspective as well. Attention scores skyrocketed at 773 and Likeability at 741, but the Desire component which came in 15% above the Auto norm is what makes this ad a big game and cross platform win.  Men and women both scored the ad well above norm but men 36-49 scored it 26% above norm. 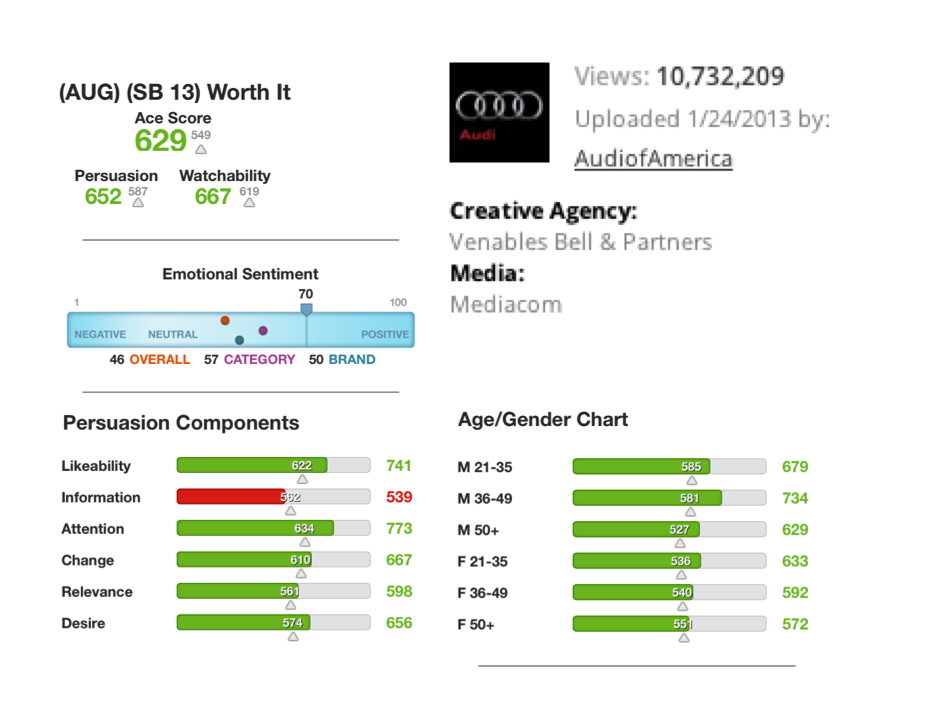 The YouTube Ads Leaderboard for 2013 (ads uploaded from January through November) is determined by an algorithm that factors in paid views, organic views and audience retention (how much of a video people choose to watch).

For additional coverage of the YouTube Ads Leaderboard, go to Adweek.com.

Ads of the Week: Best Buy’s “That Night” & Pizza Hut’s “All Hail Andy”