Barbie Tells Girls that “You Can Be Anything”

Early indications show that Mattel’s new video for Barbie, “You Can Be Anything,” is achieving exactly what the company set out to do, and then some.

The uplifting ad over indexed against the Ace Metrix toy category on every metric. It also garnered some of the highest scores ever seen for Attention (803) and Likeability (804), coming in at 36% and 44% respectively, above the category norms for those components. Out of all ads measured this year, only two have scored higher for Likeability.

The video, part of a year-long campaign with BBDO, is the brand’s latest attempt to reach a new generation of parents. Clocking in at two minutes and intended to be viewed online only, the video depicts little girls in everyday grown-up situations, imagining themselves in careers such as college professor, history museum tour guide, businesswoman, veterinarian, and soccer coach.

While the ad reached rarified air with those Attention and Likeability scores, it also had an extremely high Emotion score of 92, against a category norm of 59. Further evidence of the intense emotional reaction people had to this ad is displayed within the verbatim comments, which often included terms such as empowering, encouraging, inspiring, and moving. When asked what the best single thing was about the ad, a resounding 46% of respondents said it was the message.

Mattel has been open about targeting millennial parents, a much sought after demographic, among whom the Likeability factor for this ad is off the charts. It is also interesting to note that with 31% of respondents aged 50+, the ad is a massive hit with that group too, many of whom may be the parents of millennial parents.

As we are seeing more and more brands have success by standing for something important to their audience, Barbie’s message that girls can do anything is clearly resonating. In fact, it’s going a long way to change perception of the brand. Did we mention the ad’s 752 Change score, which is 35% above the category norm? 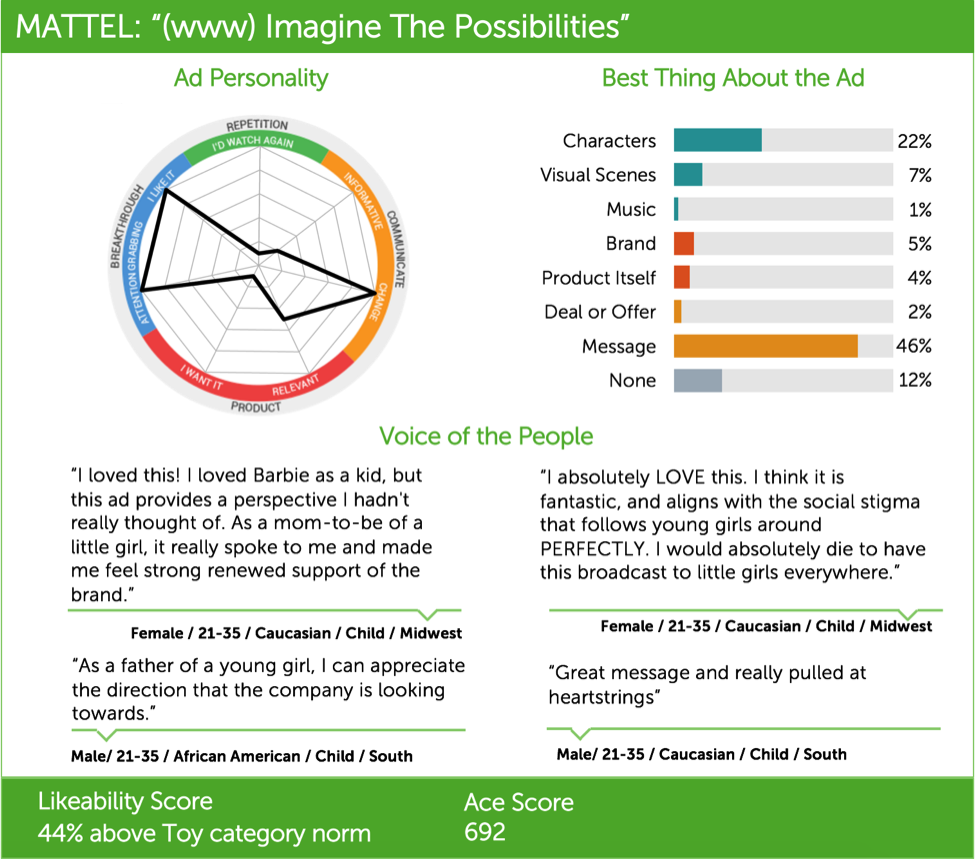