Is it us, or does there seem to have been a slew of recent/imminent releases from blockbuster movie franchises lately? Given the associated hype, brands are often eager to jump on the bandwagon, but does the investment really pay off? Do consumers even notice the brands in these movie tie-in ads? Do the previews of the films overwhelm the brand message or do they impart a positive halo? What needs to happen for the brand to justify the level of investment behind such tie-ins?

For our purposes, we analyzed viewer response to four recent blockbusters with automotive tie-ins. According to The-Numbers.com, “Rogue One: A Star Wars Story” boasts the highest gross domestic box office pull to date, followed by “Guardians of the Galaxy Vol. 2” and “The Fate of the Furious.” “Cars 3” is set to be released on June 16. 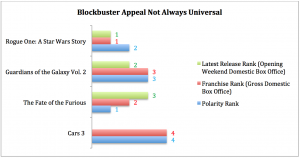 However, the value of a tie-in cannot be measured by box office pull alone. Both the movie and the tie-in ads’ success are a function of their respective audiences. The polarity rank above (1 being most polarizing) – and common sense- indicates that the Cars franchise has broader audience appeal than say, “The Fate of the Furious” – an R-rated, more limited genre target. Still huge, but less broad than something like Cars. The potency of the brand connection to the movie franchise itself and its audience are another key component to a tie-in’s success (same for the link between brands and any charity, social cause, or celebrity they choose to associate with)—not everyone likes Oprah or Star Wars. A brand associating with any other entity automatically alienates some people, so cobranding needs to be done carefully. In short, viewers want to see that the connection between the brand and movie/characters makes some sense.

Here, we examine which automotive brands are best taking advantage of the broad exposure these blockbuster affiliations can offer. 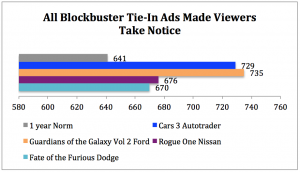 To be sure, across our full gen pop sample, all four franchises effectively garnered high Attention for their tie-in brands, with the Visuals and Characters dominating as the Single Best Thing about each ad (as high as 64% for “Cars 3”). The level of attention alone that such franchises bring to a brand can often be enough to lead to sales success, as attention brings awareness, which can lead to consideration (if the classic sales funnel is to be believed). All brands benefited from above average Attention compared to automotive norms. In our attention-distracted era, where brands struggle to get viewers to pay attention to anything, this is no small feat. 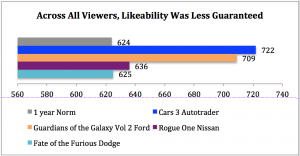 However, Likeability, which has been positively linked with sales impact in a recent study by Ad Age, fluctuated considerably across the recent releases, with only “Cars 3” and “Guardians of the Galaxy Vol. 2” boasting broad appeal. Brands leveraged the appeal of the Cars characters and the new Baby Groot character to drive Likeability.

The overall best performance across all viewers was enjoyed by Autotrader’s “Cars 3” tie-in (June 16th release), but each franchise had at least one ad that considerably beat the automotive norm. On the surface, Dodge appeared to have some trouble (with two ads below category norms), but we’ll get to that in a minute. 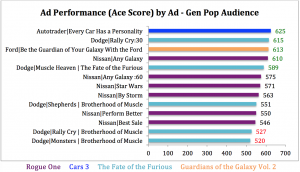 The success of the “Cars 3” tie-in for Autotrader was driven by consistently strong results on all performance measures regardless of the audience, posting above norm Relevance and Desire in addition to Breakthrough (Attention and Likeability). 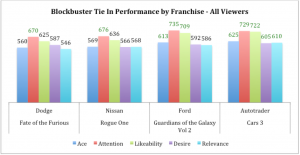 “Every Car Has A Personality,” which features various Cars characters (each of whom have a distinct personality), cleverly relates each personality type to a search feature on the Autotrader site such as speed, performance, tires, reliability, etc. Perhaps more importantly, the ad plays into the emotional connection many of us have with our cars. Indeed, a 2016 eBay study published by Fortune reported that 40% of millennials name their cars. Key for Autotrader, viewer comments reveal the spot was particularly effective at giving both brands their due time:

“i like this add. it appeals to me on multiple levels one im into cars and have used auto trader in the past and im a fan of the movie cars and did not realize a 3rd one was being made so it was a 2 for one kind of add” Male, 21-35

“i thought this ad was very cute/comical. it combined two different advertisements and it went well for both items, subjects of sale.” Female, 21-35

“Loved the animated cars that talk, like the movie. People who enjoy watching animated movies and commercials I think will remember this ad and think about autotrader when they watch this movie.” Female, 36-49

“When I first the characters from the movie Cars, I thought it was going to be about a kid-related product. But then I saw it was an ad for auto trader. It was cute. I liked it.” Female, 21-35

“I like that they made it about two different things; the product and the movie. It related to parents and children by using the cartoons and upbeat music” Female, 21-35

“Using other brands to sell yours is a great idea. Especially when the other brand that you are using is more known by the targeted customers.” Male, 21-35

“i loved this one. not only one of my favorite movies or franchises, but they used the movie tie in to show what their product/service does.” Female, 36-49

“it was cool how it used movie characters to describe the different kinds of people who would use autotrader” Male, 21-35

Behind Autotrader, Ford delivered some excellent Breakthrough with their tie-in to the very popular and likeable character Baby Groot from “Guardians of the Galaxy Vol. 2” (similar to results seen for the most effective celebrity ads). Performing equally well among males and females, “Be the Guardian of Your Galaxy with the Ford EcoSport” enjoyed considerable but not unanimous positive sentiment, as portrayed in the word cloud (created by applying NLP and clustering techniques to the hundreds of viewer verbatims received on the ad). 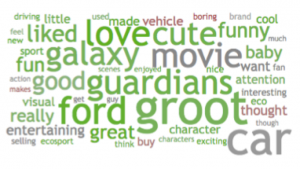 While highly entertaining, this tie-in might not have worked as hard for the Ford EcoSport brand as the Cars 3 tie-in, with Baby Groot taking center stage for some viewers who thought the spot was missing car specific information:

“I think this was genius to pair the release of Guardians of the Galaxy II with the promotion of Ford’s new Eco-sport. The visuals were bright and the actions were entertaining. The character GRoot was hilarious, and made me really focus on what the ad was advertising. In my opinion an ad that contains humor like this one, will always catch my attention.” Male, 36-49

“I really enjoy the fact the woman went with Groot on an adventure! As someone who loves Guardians of the Galaxy and Marvel, it was amusing to see Groot featured in the ad. Also, thank you for doing an ad where the woman is the nerd and is the person driving the car! It didn’t feel forced, but rather was very refreshing and relatable. Great ad!” Female, 21-35

“i like the visuals of the ad, but i didn’t know it was a vehicle ad, i thought it was an ad for some guardian’s of the galaxy toy or other merchandise. i want the toy more than the car. i don’t even know much about the vehicle from the ad.” Female, 21-35

“Entertaining ad, but I’m not going to buy a car because of a movie character. Focus on the car features. Reminisce of throwing babies or other “cute” but unrelated content into a commercial because the product can’t sell itself. Annoying.” Female, 21-35

“Although I enjoy that this is filled with great visual effects it tells us more about the movie than the car. I feel like I would want to know more about a car I’m paying $18,000 for than a movie ticket I can buy for $18.” Female, 21-35

“I love Guardians of the Galaxy. I had to stop and look that it was a Ford. Was more interested in baby groot than the car.” Male, 21-35

Sometimes, You Can’t (and Don’t Need to) Please Everyone

Some brands, however, do not seek to capture all audiences. The Dodge muscle car brands boast a very strong and loyal base, which happens to overlap quite nicely with fans of the Fast and Furious franchise (star Vin Diesel reportedly owns many muscle cars and is also a key component of the new release tie-ins on social media), and as a result, Dodge enjoyed much stronger resonance among male viewers. 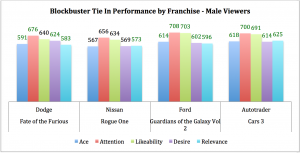 While “Rogue One: A Star Wars Story” presented a unique opportunity that Nissan simply could not pass up, you might be thinking this link is “in name only,” and to some extent that is true. The mere commonality between the movie and model name may seem superficial, but this is a case where attention alone more than pays off. Once the connection was made in the viewer’s mind between Rogue One and the Nissan Rogue, anytime the movie was mentioned (and it was all over the airwaves), that connection was strengthened, ensuring strong awareness. Broad exposure was the strength of the Rogue One tie-in. Nissan also extended that link through promotions such as a limited edition Star Wars Rogue vehicle and the “Death Trooper” helmet available only to owners of said limited edition Nissan Rogue. In the end, the splattering of the tie-in everywhere made escaping it unavoidable to viewers, and the Nissan Rogue reportedly pulled in record sales during December 2016, beating both Toyota’s RAV4 and the Honda CR-V. However, while it is easy to remember the Rogue tie-in, can you recall what auto brand tied into the previous Star Wars release, “The Force Awakens”?*

While the lift in Attention generated by a blockbuster tie-in can be significant for a brand, it can be fleeting, especially if the movie turns out to be a box office flop. But when marketers go the extra mile by intelligently connecting their brand to the film, consumers can be not just entertained, but persuaded. Think Reese’s Pieces legendary tie-in with the movie “E.T.” Hershey’s did not pay to have Reese’s Pieces used in “E.T.” but it did agree to do a tie-in between the movie and the candy after its release and had a 65% sales increase as a result.

There is no question that these cobranding ads help the movie itself, but our data show that piggy-backing your brand on a blockbuster movie is at least as effective in generating viewer Attention as non tie-in ads, and it might be easier and less risky. Blockbuster tie-ins don’t guarantee success on all metrics- brand ID and Information are not assured – and can be polarizing. It still takes creative smarts to make the connection between the movie/characters and the brand relevant and believable.

*It was Chrysler brands!

Love Conquers All in Top Breakthrough Ads of Q1