It’s that time of year again. Spring is in the air, and home improvement ads are hitting the airwaves. The months of March through May are the peak season for ads from Lowe’s, Home Depot and other brands in the Home Improvement category. In fact, over the past several years, some 38% of home improvement ads (106 of 282) have broken during this three-month period.

Lowe’s and Home Depot account for the majority of volume in the category. Since 2013, Lowe’s has aired 50 unique ads, while Home Depot has aired 36 unique spots. In aggregate, the big two account for 78% of the category’s total ad volume. The other five brands aired just 24 ads among them. Ranked by average Ace Score, Sherwin-Williams has the highest average at 574 (based on just three unique spots), followed by Home Depot (570) and Lowe’s (554).  These scores are somewhat higher for co-branded paint ads.  Home Depot’s ads, co-branded with Behr, scored 582 on average, while Lowe’s ads, co-branded with Valspar, averaged 578.  Home Depot’s highest scoring Behr ad during 2013-2014 achieved a 599 Ace Score (“One Coat Done”), while Lowe’s highest scoring Valspar ad over this period scored 603 (“Refresh Your Home”).

Home Depot and Lowe’s offer an interesting distinction in viewers’ opinions of their ads. While these companies posted average scores that are quite similar, panelists’ perceptions on the best thing about their ads show a notable contrast. Based on results from the new “What’s the best thing about this ad?” question in our survey, 44% of respondents cite “The product itself” after viewing Home Depot ads, versus just 10% selecting that choice for Lowe’s ads. On the flipside, some 24% of respondents select “The brand and everything it stands for” after watching Lowe’s ads, versus just 9% for Home Depot ads.

One of the factors behind this difference is ad duration. Home Depot airs a higher percentage of 30-second spots (91% of its portfolio) compared to Lowe’s ad portfolio of 0:30s (64%). Longer-format ads often feature more than one product, which may increase the likelihood that “The product itself” is cited as the best thing about a 0:30 ad versus a 0:15 ad. 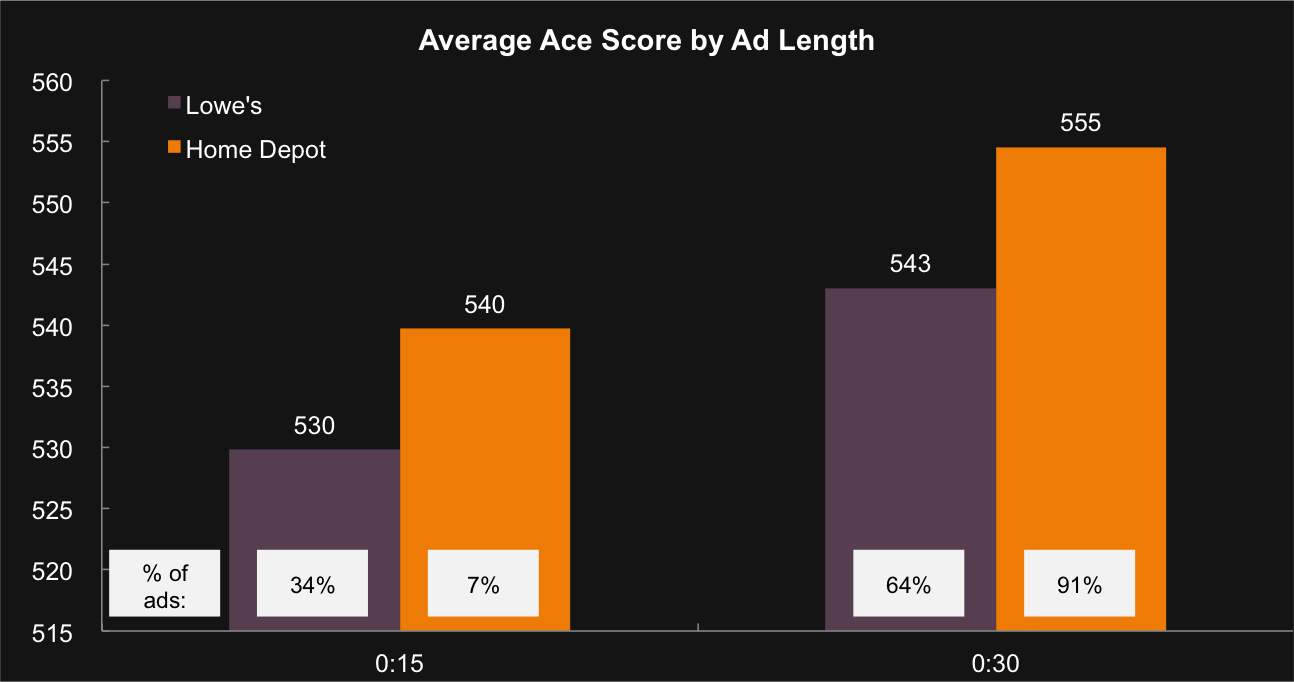 As we head into the summer months, ad volume will slow down a bit in the Home Improvement category, but we’ll continue to keep an eye on trends in ad effectiveness in this and other categories. Keep a tab open for our blog for additional insights on other categories in the weeks and months ahead.

Chevrolet and Dawn Bring On the Smiles and the Awwws