How Donald Trump’s “Great Again” is Working with Voters

With less than a month until the Republican primaries in Iowa and New Hampshire, Donald Trump created a stir this week with the launch of his first television ad of the 2016 presidential campaign.

In Ace Metrix testing, the 30-second spot, “Great Again”, has scored on par with all presidential campaign ads to-date, achieving an overall Ace Score of 453, compared to the norm of 452. Among the ad components tested against, the ad only tops the presidential campaign norm for capturing Attention, but falls below in the areas of Agreement, Relevance, Credibility, Learning, and Seeking Information. When voters were asked what they consider the most important issue in the campaign, those who said Foreign Policy gave the ad a score of 430, and those who said Immigration scored the ad 344. This is revealing in that the ad scored below norm among those who are most interested in the two major themes of the ad. All of these scores are based on surveys of 500 respondents per ad and a sample of national registered voters balanced to the US census.

Most of this is relatively unsurprising when compared to all presidential campaign ads, across our full survey sample. But here’s where things get a bit more interesting…

Among the 101 Republican presidential ads that have aired since July of last year, with 27% appearing in the past 30 days, “Great Again” is ranked 33rd by overall Ace Score. Trump’s ad has the second highest Ace Score (698) among those who identify as “Always Republican” voters. The highest scoring ad overall among these voters is Cruz for President’s “Rebuild our Military” with an Ace Score of 704.

Comparing “Great Again” to four other ads that have expressly anti-ISIS sentiment, among “Always Republican” voters who are most interested in the quality of Foreign Policy Experience in a candidate, Trump’s achieves the highest overall score: 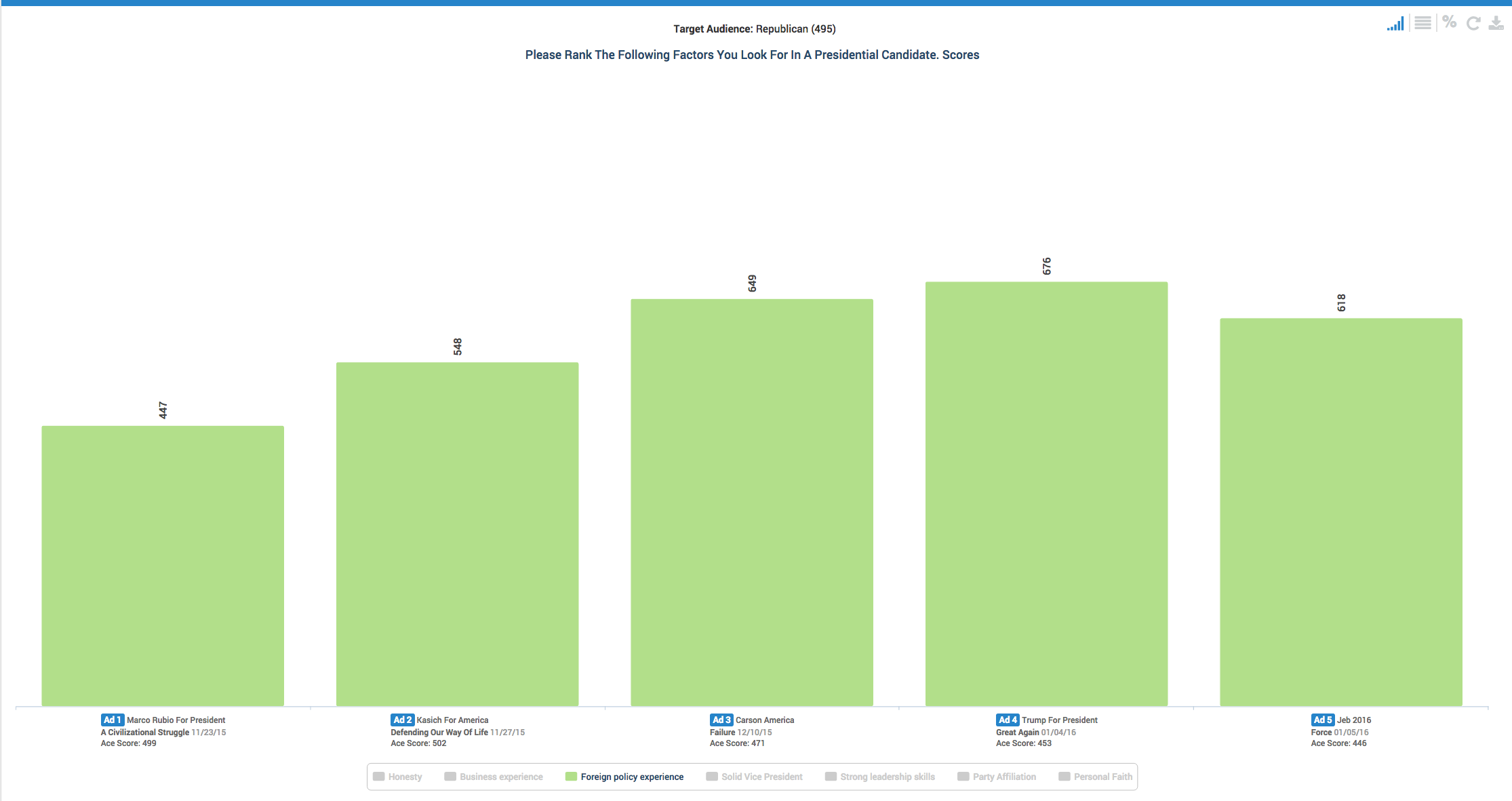 Turning our attention to voters who identify as Independent, a group all candidates want to sway, we see that “Great Again” is the 16th highest scoring ad with an Ace Score of 460. The top scoring ad for this group is Kasich for America’s “Never Give Up”, released a day after Trump’s ad. This ad is biographical in nature, and focused on the candidate’s personal resilience rather than foreign policy. Carson America’s “Why” (520), an ad centering on the effect of our national debt on future generations, garnered the second highest Ace Score among Independents (491).

Looking at the theme of immigration, central to Trump’s ad, we compare it to another ad heavily focused on this issue, Cruz for President’s “Border.” Among Independents, “Border” is the 26th ranked ad by Ace Score. Additionally, Independent voters who indicated that immigration is the most important issue to them scored Trump’s ad significantly higher than Cruz’s (513 vs. 478), though Cruz scored higher on other issues. 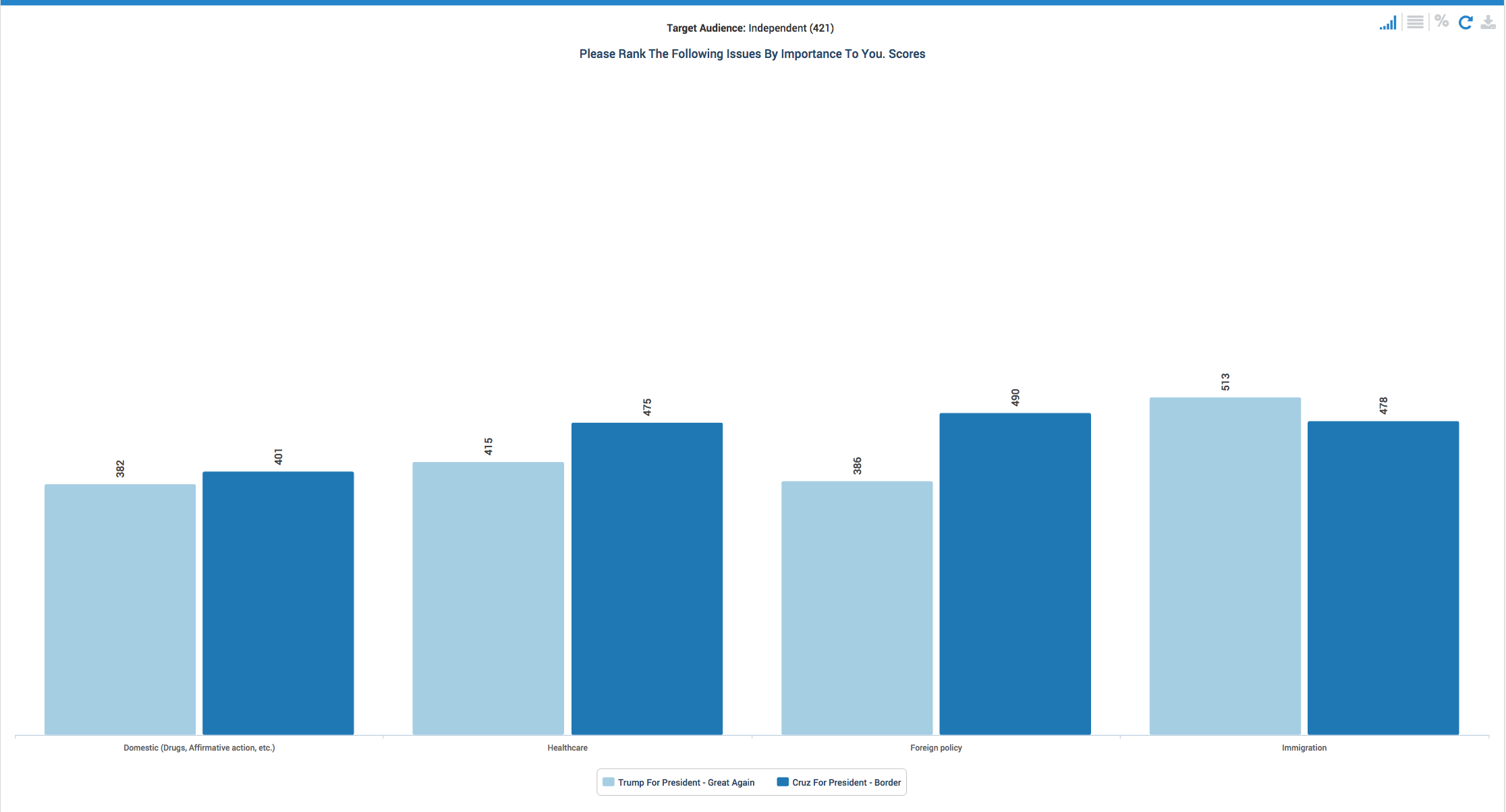 In terms of impact on vote likelihood, among Independent voters, Trump’s ad scored a 52 on a scale of 1-100 for “changing likelihood to vote.” In contrast, Carson’s “Why” scored a 56 on this scale, while Cruz’s “Border” scored a 42.

Our data indicates that Trump’s message is resonating with voters on his side of the political spectrum, and is showing signs of broader appeal, further evidenced by the 560 Re-Watchability score the ad received from Independents. The presidential campaign norm for wanting to watch an ad again is 537.

View the campaign ads discussed in this post below. Note: “Ace” is the Ace Score from voters identifying as “Always Voting Republican”.

Launched in 2012, Ace Metrix POLITICS provides video ad effectiveness metrics and data to campaigns, PACs, and advocacy groups, based on 500 respondents per ad and a sample of national registered voters balanced to the US census. The data collected provides insights into the effectiveness of the ad, verbatim responses and the likelihood the ad changed the way respondents will vote.

How Are Consumers Responding to Chobani’s Negative Attack on their Competition?