Hulu seizes this week’s Category Overachiever title with its newest ad, which highlights the variety of content available to its streaming subscribers on a range of devices. Dyson showcased one of its flagship vacuums, the DC59 Motorhead, in a comparison commercial that focused on the features of Dyson’s most powerful cordless product.

Hulu comes out swinging with its ad “Watch Now,” which came with an Ace Score of 638, 21% above the 12-month Television Services category norm and outperforming nearly one hundred ads to break in the category in the last year.

Females awarded the ad scores well above the 90-day norm with women 36-49 scoring it best, 24% above the average. Men ages 21-49 also gave the ad strong scores, but the ad fell just a bit short with the older male demographic. 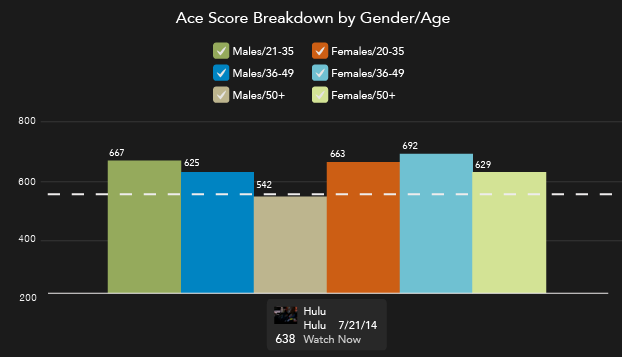 Likeability and Attention are the strongest components from an absolute perspective but the Relevance and Desire scores (10% and 13% above norm) bode well for Hulu in the highly competitive race for subscribers.

A look at the 385 optional verbatim responses reveals what makes the ad a winner. By using part of the 0:30 ad to showcase its portfolio of popular TV series and the second half of the ad to demonstrate the service’s availability on portable devices, consumers were able to relate to the ad as well as learn something new about Hulu. The ad had an impressive number of mentions of the brand “Hulu” (16%) among the consumer responses. 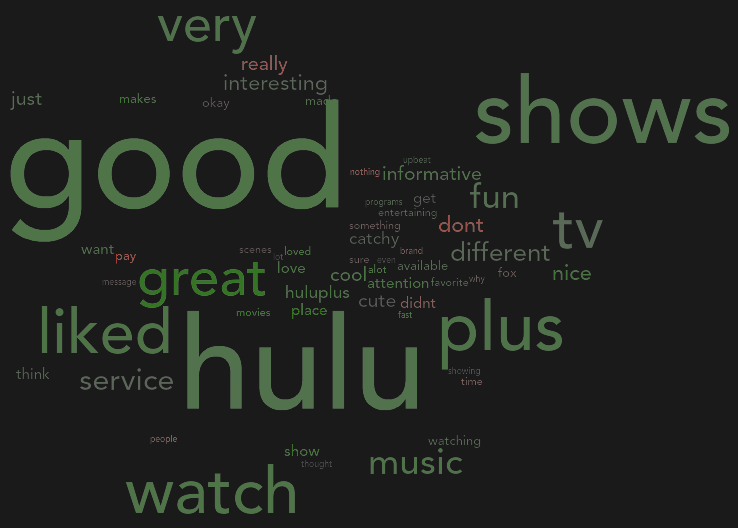 This ad is a strong departure from Hulu’s “Alien-esque” ads of 2012 and even from its humor-filled spots from 2013. We’ve seen time-and-again that a carefully crafted montage of scenes from consumers’ favorite media (think Google Play and Netflix ads) can really win people over; and here we see it again with Hulu. Has Hulu discovered its recipe for creative advertising success? We’re looking forward to seeing other pieces of creative it debuts throughout the rest of the year.

Dyson aired the highest scoring ad of the week last week with the debut of “Remember the Hassle,” which entered the LIVE database with an Ace Score of 639. The ad compares the new Dyson DC59 Motorhead vacuum against a traditional, standup vacuum—obviously, there is very little comparison between the two since Dyson’s vacuums do away with the pesky power cord.

While the winning Dyson ad was the highest scoring ad to debut last week, it happens to fall into an extremely competitive category—Appliances. The Appliances category, if you remember, boasted the ad with the highest Ace Score in the second quarter this year (coming from Kitchen Aid). The current, 90-day norm for Appliances is 653, a few percent above this Dyson ad. In fact, only women 21–49 scored this ad above norm. 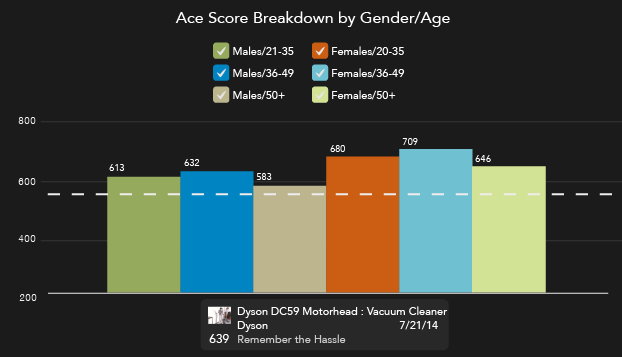 Dyson’s new ad scored above the norm for Relevance and Desire, but fell short across the other four components. It’s worth noting that when comparing these scores against our database of ads, they are still considered quite high scores but just about average for the Appliance gang.

Reading through the 366 optional comments for the ad, it’s obvious that the simplicity of the ad was a little too plain for consumers’ tastes, leading to low Likeability and Attention scores. Still, many consumers remarked on how innovative and handy the product looked, likely driving those high Relevance and Desire scores. The Dyson ad may have needed a little more *bling* to get an above-norm Ace Score in the Appliance category.

While a score of 639 is a high score in most categories, Dyson had to fall in the Appliance category in the midst of the category’s big Spring/Summer advertising push. The ad does hold the attention though for a very key demographic of younger women, which is likely aligned with its target audience for the ad.

Recess is Over – Get Back to School