Three minutes. An ad length often considered too long for digital, and essentially unheard of for TV. However, Lowe’s broke the rules by airing a 3-minute love story on national television, begging the question, can long form work on TV?

This tremendous work, created by BBDO New York, tells the tale of two neighboring teens, whose young love begins when the female character and her family move into the house across the street from the male lead. The story shows their relationship evolving through the years, from puppy love to marriage to becoming parents themselves. The connection to home improvement is seamlessly woven into the narrative, as the now-adult couple fixes up and sells the female’s childhood house across the street. They sell this house to another family, who has a daughter, and – you guessed it – the main character’s son catches a glimpse and is instantly smitten with her, completing the loop. 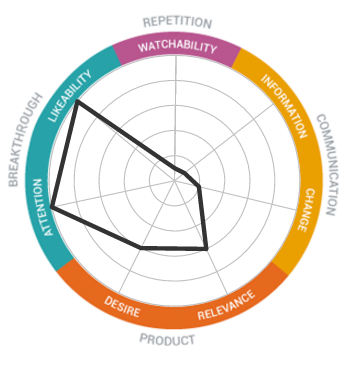 To help determine which creative aspects drive Breakthrough, we ask respondents what they feel the Single Best Thing about the ad is. For this creative, and to no one’s surprise, the Message was most commonly selected, followed by the Visual Scenes and the Characters. The Message was described as “sweet”, “heartwarming”, and “touching” in viewer verbatim feedback. The visuals, which include changing seasons and time-lapses, are beautifully shot (as one respondent noted, it “was almost like watching a mini movie”). There is also whimsical imagery throughout the ad… touches like the house “winking and smiling” or heart-shaped smoke emerging from the chimney delighted viewers. The characters come across as both incredibly likeable and relatable – nostalgia was present across many responses, as viewers reminisced on the feelings they had during their first crush, along with the other life events so masterfully portrayed throughout this ad. Many of these themes are present in the emotional word cloud below, which pulls highly emotive words out of viewer’s open-ended reactions to the ad: 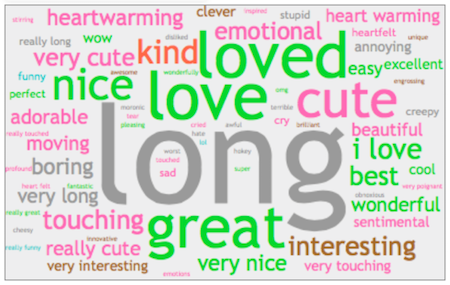 When airing an ad this long on television, marketers will inevitably wonder how consumers react to the length, and whether they stay engaged. 26% of viewers mentioned the ad was “long”, but the sentiment among that group wasn’t all negative. Many said that, while long, they loved the story. Furthermore, the ad shows very little polarity. With a Polarity Score of 41 (on a scale of 1-100), we see viewers are mostly in agreement about this impressive ad.

Sometimes polarity is more pronounced when cutting the results by various age/gender demographics. However, this ad was well received across age/gender breaks, scoring significantly above norm across each group. 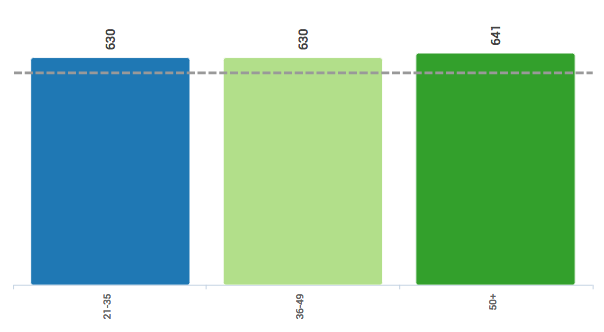 In this case, low polarity is essential to the creative’s success. When airing on national network television (as this ad did), viewed by broad audience, you can’t risk offending or upsetting a large proportion of viewers. In order to maximize effectiveness and media dollars, you must have widespread buy-in, as seen here.

The ad’s breakthrough results also contributed to high social engagement for Lowe’s. Though the ad debuted online in late April, it was the national TV-airing during NBC’s The Voice last week that drove viral success. Within two days of that airing, “House Love” ranked as the #1 Most Digitally Engaging ad of the week, according to weekly rankings from Ad Age/iSpot. To date, total views on the Lowe’s YouTube channel are over 18 million.

If we were to point out an area for improvement, it would be branding, as only 60% of viewers correctly identified Lowe’s as the brand featured in the ad. One possible reason is the “hidden brand” approach, where Lowe’s isn’t revealed until the very end, leading to some confusion throughout (“which brand is this ad for?”). It’s possible that incorporating the brand earlier in the creative would eliminate any confusion and increase the connection between the incredible story and Lowe’s. However, brand shots can feel forced and detract from the story, so any earlier brand inclusion would need to be done in an organic manner that wouldn’t disengage viewers.

Achieving top breakthrough, creating a strong emotional connection with viewers, and appealing across a wide range of demographics are no small feats, but each are accomplished here in “House Love”. All in all, Lowe’s really hit it out of the park, proving that long form can be used effectively across mediums as long as the story is interesting and engaging.

Ad of the Week: Droga5’s ’Employee-made’ Johnsonville Spot Scores Big in the Midwest