Payless Improves Ad Performance with a Shift in Messaging Approach

Breaking through the clutter with advertising messages is a challenge that seems to grow exponentially on a daily basis. The retail industry, more specifically “Specialty Apparel”, might just be the most difficult of all verticals in which to achieve this. Aside from having to compete with massive online retailers such as Amazon, grabbing viewer attention in a way that’s differentiated from Old Navy, H&M, and others in a :15 or :30 spot is a tall order.

This year, Payless, along with their agency MARC USA, has significantly shifted their creative approach. In 2015, many Payless ads featured two women talking about the style of their shoes, which were placed on display tables or held in the air for consumers to view. These ads did a decent enough job of conveying BOGO offers and other sales, but struggled to truly engage viewers and promote the brand’s core competency – style at affordable prices. However, this year’s creative has been a major step in the right direction. Bright, saturated colors fill the screen. Popular, upbeat music bursts through the speakers. No longer are two women telling you why the shoes are great – instead, viewers are pulled into creative that puts the stylish shoes in action.

The data paints a clear portrait of the impact of this shift for Payless. We averaged the scores for this new campaign and compared them against two benchmarks – 2015 Payless ads, and this year’s Retail category norm. All of the scores that follow are representative of women-only. 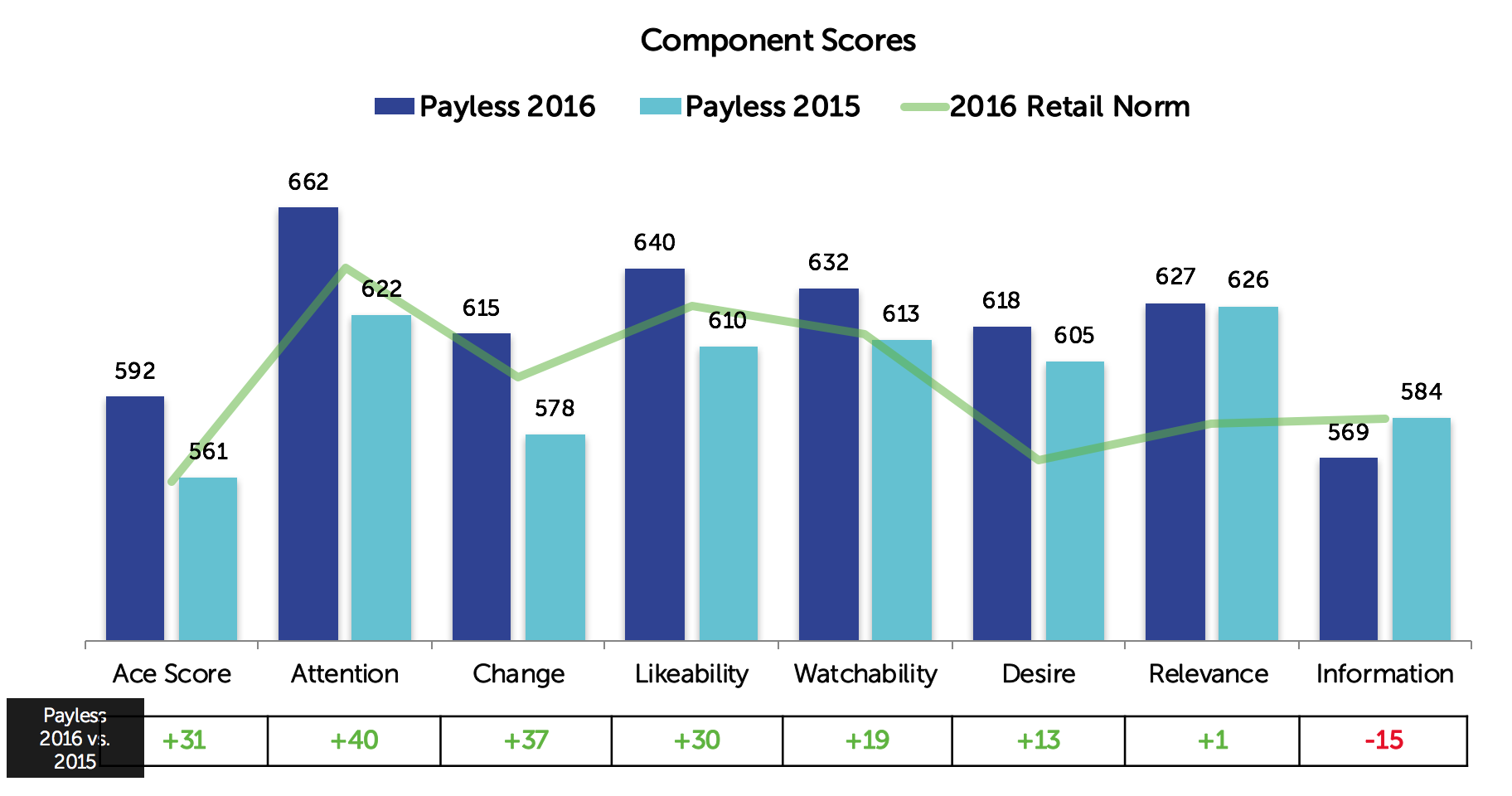 As seen above, this new direction was extremely well received by Payless’ core market, women. The Ace Score, which is a holistic measure that consists of various measures critical to advertising success, is over 30 points higher than the previous year’s creative. When digging into the specific components, the reason for this high overall score comes into focus.  Campaign goals likely include the following – breaking through the competitive clutter, and positioning Payless as a fashionable and stylish brand. With a Change score 37 points higher than the previous year, respondents clearly felt the new creative represents a positive shift in direction for Payless. There were many responses that directly mentioned that Payless wasn’t a brand they considered in the past, but after watching one of these new ads, they may pay the store a visit…

The Attention and Likeability results are also significantly lifted above 2015 creative, confirming the new campaign is not only grabbing attention, but also delivering highly likeable creative, likely to stick in viewer’s minds. This shift toward a pleasing sensory experience is also on display when we asked viewers to name the “Single Best Thing” about the ad: 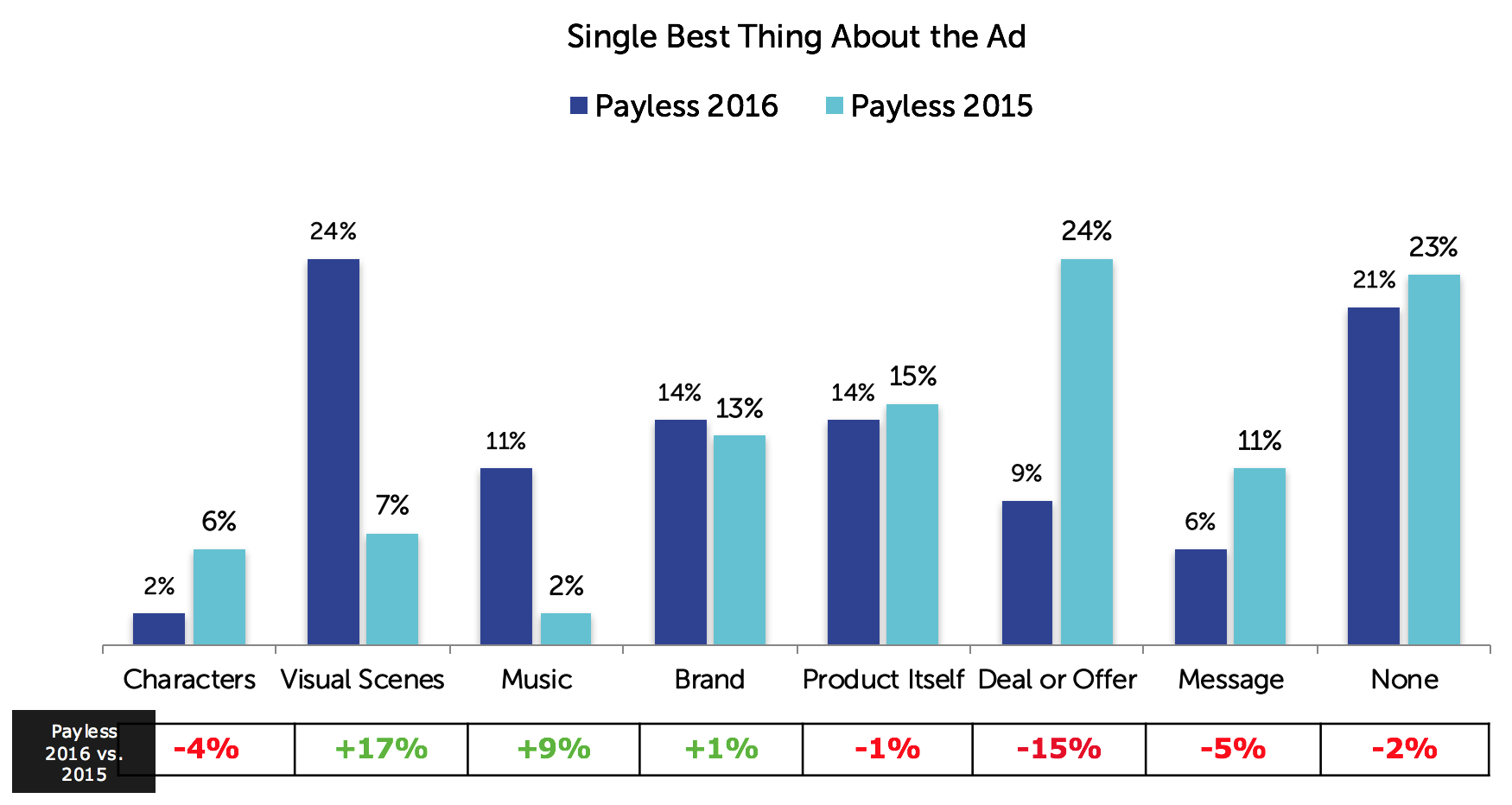 In the current campaign, respondents were significantly more likely to select the “Visual Scenes” or the “Music” as the best part of the ad. The visuals were described as “vibrant”, “bold”, and “fun”. As one viewer said, “The colors in the video really stood out and made me notice the products.” This shift in creative makeup aligns well with brand objectives – positioning Payless as a brand with the latest styles and fashions. After all, a fashion-forward brand should have fashion-forward advertising. When we asked viewers to further explain their thoughts/feelings about the ad, the results were telling – spontaneous brand mentions in the open-ended results show Payless was mentioned in a much more positive manner (+62 pt. Ace Score) in the most recent campaign:

Viewer verbatims continue to reflect the prevalence of product/style in the revamped campaign when compared to past work, which was more heavily focused on sale information:

There is simply too much clutter out there to believe consumers will invest their precious time watching an ad if it doesn’t engage and entertain. Then, if a brand is able to break through and capture the consumer’s attention, there is the challenge of ensuring the message aligns with brand objectives. Payless is succeeding on both fronts with this new campaign, effectively grabbing viewer attention with likable content, and highlighting Payless as a brand that makes style affordable.

Sample of 2016 Payless Ads (Ace Scores below are for women)

Sample of 2015 Payless Ads (Ace Scores below are for women)

Emotion Rules the Day: The Top Breakthrough Ads of Q2