Although not bustling with new ad activity for each campaign, June was an interesting month in the presidential ad race nonetheless. As primaries wound down, the candidates themselves took a low profile, with neither Trump nor Clinton airing any new ads in May, and Clinton tiptoeing back in with just a handful of fresh ads in June (five in total) – although the PACs were active. Continuing his focus on media coverage over advertising, Trump again released no new spots in June, while Sanders pitched a single new ad to the airwaves in each of May and June despite a supposed exit from the race. 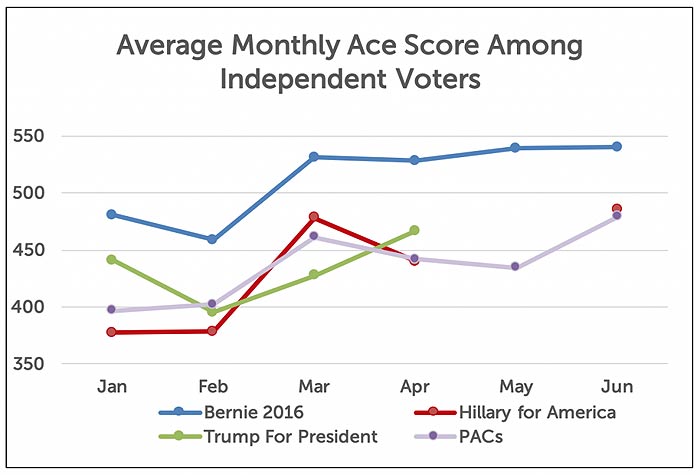 The overall Ace Score norm for presidential ads since the beginning of the year (327 ads in total, with 83 from candidates no longer in the race) among Independent voters is 435 – with candidates still on air barely reaching this norm performance. Sanders was a clear favorite among this group (with his performance year-to-date beating the norm by 66 points); however, his all but final exit from the race leaves a large group of voters with a difficult decision ahead.

Campaign ’16 has rapidly become the #Never race, with voters vehemently against candidates, but not necessarily behind any given candidate.  300-point swings are common between Republican and Democratic voter ratings of the same ad, as the #Never Trump and #Never Clinton factions draw their lines in the sand.  The divide is substantial:

However, with such polarizing candidates, advertising to change minds is quite a challenge – even among the party faithful.  The voter verbatim comments below from various ads demonstrate that these #Never sentiments extend within party lines, likely to an unprecedented degree:

As Democrats and Republicans alike continue to grapple with their ostensibly less than perfect presumptive nominees, Independents are becoming ever more crucial as influencers on the final election outcome.

The effort to convince continued, however, with advertising efforts in May and June of 2016 remaining largely negative, as indicated by the Ace Metrix Negativity Index, which considers both the number of negative ads and their impact on voting intention among these swing voters. While the Impact Score averages were similar for anti-Clinton (42) and anti-Trump ads (43), the number of negative ads put out by the Clinton camp was higher, driving up the Index score. 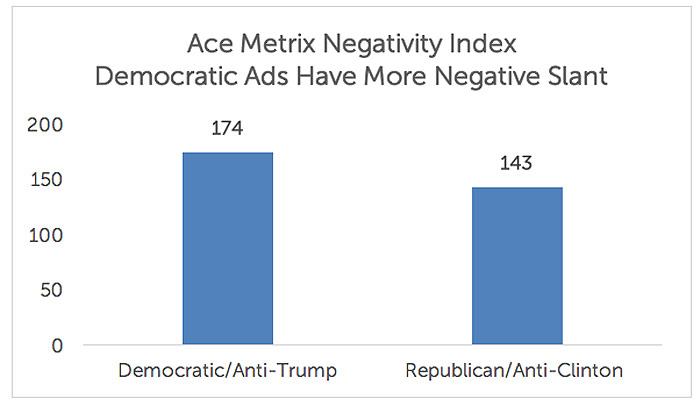 Unwelcome news to the partisan camps, the messages that performed the best in both May and June were those that showed no clear favorite, and often, no mention of any candidate at all. Recently, we saw The Advocacy Group post four of the top five Ace score ads that were clearly anti-Trump, anti-Obama, and even anti-Clinton at times. None suggested a positive alternative but simply presented the voter dilemma. In June, Koch Industries impressed voters across parties, without supporting (or denouncing) any candidate at all.

With the candidate ad teams pausing to reload with new creative for the next stage in the race, June became the time for special interest groups to shine, with two ads in particular capturing the hearts and minds of the voting public, and another two convincingly swaying some undecided minds.

Across our full sample (all voting parties), Koch Industries’ return to civility, “End the Divide” made no mention of any presidential candidate. Calling for the demise of American’s two-tiered, “winner take all” system to close the gap between the haves and have-nots, this ad came in as the highest scoring to date among all 327 presidential ads aired in 2016. It also ranked as the most relevant and most watchable message of the race so far across all our viewers, as well as the ad inspiring voters to seek out additional information.

“End the Divide” resonated particularly well with the all-important swing voters, ranking second (behind Sander’s “Fairness,” which carried a similar call for closing the wealth gap in America) in overall performance to date, as well as being the most watchable, most relevant, and overall best ad among these voters last month. As with our full sample, Independents also rated the Koch Industries spot as the one that drove them to gather more information than any other presidential ad airing in June.

Reflecting its non-partisan approach, “End the Divide” also rates as one of the least polarizing presidential ads of 2016, ranking in the 4th percentile (96% of political ads this year showed more viewer disagreement).

Produced by the pro-Clinton Priorities USA PAC, “Grace” was another standout ad in June, managing to deliver a strong anti-Trump message in a far less negative manner than previous attack ads we’ve seen in this race so far. Featuring parents of a disabled child with spina bifida, Priorities USA PAC made voters stop and watch its anti-Trump “Grace,” posting the highest Attention score of the year across all voters (753 vs. 726 for “End the Divide” and 715 for previous front-runner “Quotes”). This ad presents Chris and Lauren Glaros describing their dismay at Trump’s mocking of a disabled reporter. Lauren comments that “the children at Grace’s school all know never to mock her,” while Chris adds that the candidate’s behavior “showed me his soul, it showed me his heart, and I didn’t like what I saw.” The emotional spot also ranked as most Agreeable and most Credible to date across our 500+ sample. The ad drew an immediate response from the Trump camp saying the gestures were about a reporter, not a disabled person.

“Grace” also took the top performing spot of Campaign ’16 among the crucial Independent contingent in both Attention and Agreement. In today’s “ad avoidance” culture, just breaking through the clutter can be a challenge for any ad. As Ace Metrix CEO Peter Daboll states, “The fundamental truth for today’s marketer is that attention for (the) message is no longer a given. It has to be earned.” In the political realm, many ads garner attention but few execute in such a way as to bring voters into the message with nods of agreement along the way, as this ad did. Quite a fait accompli.

A pro-Trump PAC still managed to find success with key voters in June as well. Getting viewers to take notice of your message is one thing, and if they are riding along with you to agreement, even better. However, another level of success can be claimed when the ad actually exhibits the ability to influence voter behavior. On this front, the anti-Clinton “It Takes Two” from the pro-Trump Rebuilding America Now PAC put forth a convincing message to swing voters with a June-leading Impact score of 33. Right behind at a 34 Impact among Independents, was “More of the Same,” from the same PAC. Relatively new to the advertising scene in this race, Rebuilding America has succeeded in putting forth material that is having an impact upon the crucial “in-play” votes (particularly Millennials), each by juxtaposing Hillary Clinton’s comments and texts to those made earlier by her husband in the midst of his presidential scandals.

Across America, frustrated voters continue to ponder what feels like a choice between the lesser of two evils, with special interest groups jumping onto the #Never bandwagon by preaching against candidates and policies, but stopping short of endorsing anyone. These groups at the present time seem to be content to remind us that there must be something better, spending millions of dollars to convince us NOT to vote for various candidates. What remains to be seen is where this money will lead. Could a third party candidate or an upset at the conventions be their “solution?”  Or are they just trying to convince the country to avoid voting for either candidate?  One thing is certain; the intensity and vitriol of negative ads is not waning.

Ad of the Week: Chili’s Breaks Through with a Ride Back to Their Roots