According to the National Retail Federation, 28.8 million people are expected to start their Black Friday shopping on Thanksgiving Day. Considering this stat, I know two things for certain. I will not be among them, and they will not be shopping at T.J. Maxx, Marshalls, or HomeGoods. Those brands are among the retailers closing on the holiday to allow their employees to spend time with their families, and their advertising reflects that spirit.

The TJX stores recently launched a continuation of their 2015 “Bring Back the Holidays” campaign, which set out to remind people what the holidays are about. The anthem ad went so far as to say the four letter word that defines the season should be L-O-V-E not S-A-L-E. That ad, as well as its Thanksgiving ad, were among the most-liked and relevant holiday ads ads we saw last year. This year’s ads pick up right where those left off, delivering a message perhaps even more important than ever.

Stating that their stores are closed on the holiday because “family time comes first,” this year’s Thanksgiving ad showed wide appeal in testing. The sincerity of the ad helped it exceed the Discount Store category norm by 17% overall, as well as the norm for every Ace Metrix measure. With a Relevance score 18% above norm, viewers clearly connected to the ad. Another important indicator that the message of togetherness came through, 39% said it was the best thing about the ad.

The Ad Personality chart below illustrates the powerful combination of relative strengths in Likeabilty and Relevance. The Single Best Thing chart shows what other creative elements broke through to viewers (“None” indicates the viewer found all of equal importance). 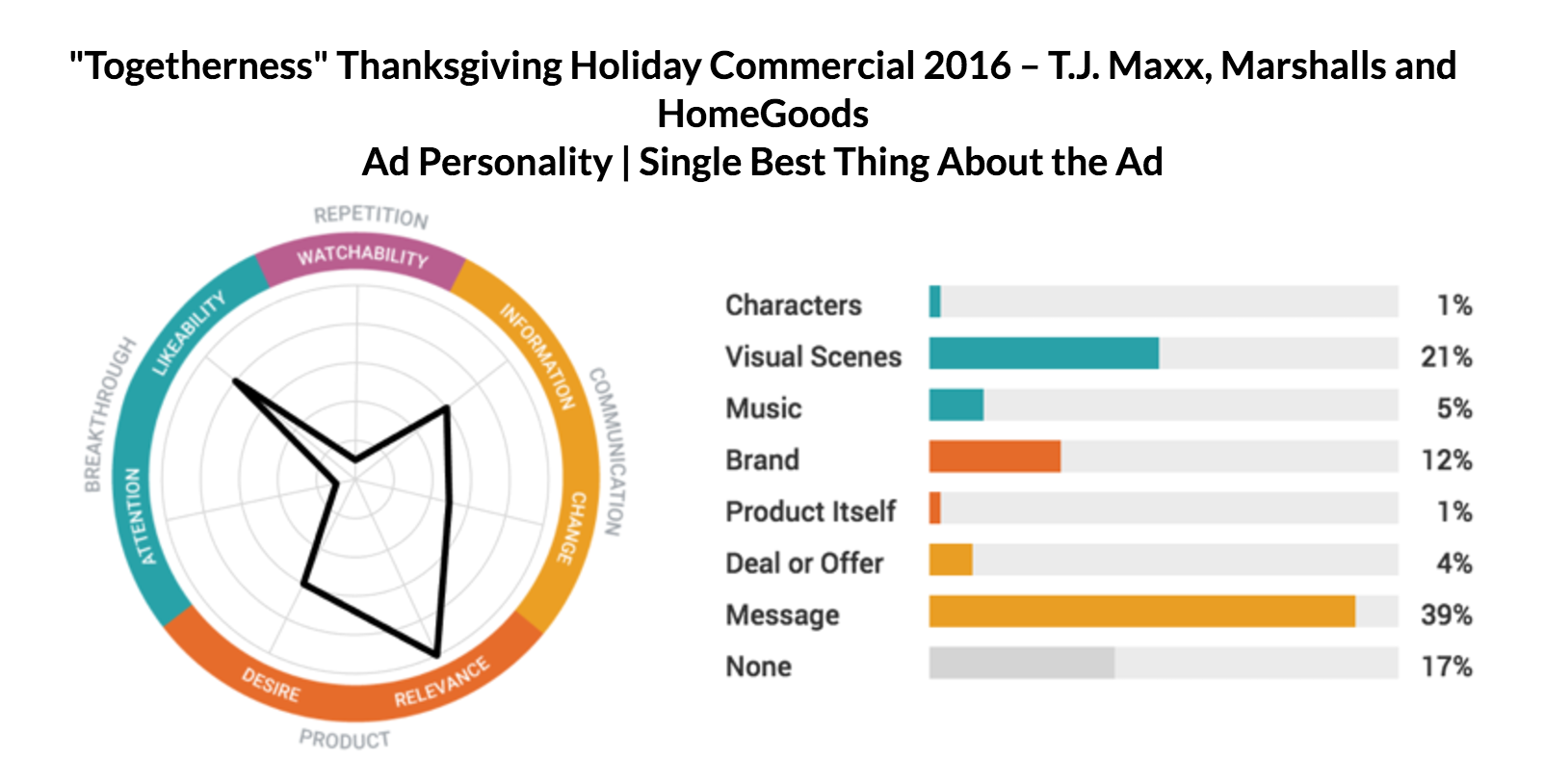 The ad was warmly received by all ages, though it was appreciated most by those 50+. They also specifically call out the message in their comments:

Looking at the level of emotion driven by the campaign, we see remarkable consistency. Below are the Emotional Word clouds for this year’s Thanksgiving ad compared to last year’s. Viewer comments showed that this year’s ad was even stronger in it’s ability to tug at the heartstrings.

Another sign that the ad’s message was heard and drove brand affinity, an astronomical 63% of viewers said purchase intent at these stores went up after viewing the ad. Some of their comments:

On a final ad response note, a handful of viewers also tipped their cap to the company for featuring diversity within the ad. Said one 36-49-year-old woman, “It was heartwarming. I also liked the racial diversity in the ad.” Maybe this simple reminder of unity will resonate in more ways than anticipated.

Happy Thanksgiving, to you and yours. And if you’re among the 28.8 million hitting the stores after Thanksgiving dinner, good luck out there. I’ll be in a food coma on the couch at my in-laws’ house, watching football.