With the South Carolina Republican primary taking place tomorrow, we examined which candidates found the most success with their television advertising across voters in the South Atlantic region. Advertising tactics and themes emanating from this field have run the gamut, from unabashed attacks on the competition to unbridled religious passion. While we can’t support any poll predictions, we can determine trends and what’s working with the voters. To be clear, within our survey methodology, the South Atlantic region includes Delaware, Maryland, North Carolina, South Carolina, Virginia, West Virginia, and Washington, D.C.

Using the holistic measure of the Ace Score, as derived by surveying voters in this region who identify as Republican, Ted Cruz has delivered the most effective ads. The Ace Score is the measure of ad creative effectiveness based on viewer reaction to national TV and online video ads, providing the advertising industry an unbiased resource to measure creative impact. The results are presented on a scale of 1–950, which represents scoring on creative attributes such as Attention, Agreement, Learning, Credibility, Relevance, and interest to Seek info, plus Watchability factors.

Of the ten top performing ads that have aired in the past 60 days, we see five supporting Ted Cruz, three from Marco Rubio and the Conservative Solutions PAC that supports him, and two that from Right to Rise, the super PAC supporting Jeb Bush. For perspective, the Trump for President ad, “Worst Kind”, achieved an Ace Score of 410 in this region.

Ten Highest Scoring Ads among Republicans in the South Atlantic Region (past 60 days):

All of the ten ads listed above perform better among women than men, with the largest differential occurring for Right to Rise’s “Beliefs” which scored 609 among women and 494 among men. Trump’s ad proved more effective among men, with a 463 score vs. 401 among women. 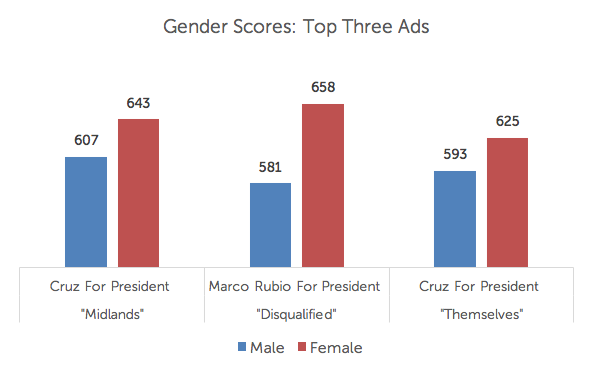 The three ads with the highest Ace Scores were also the top three in these key components:

In addition, these ads had the highest Impact Scores, which is a measure on a scale of 1-100 for “changing likelihood to vote.” The two Cruz ads, “Midlands” and “Themselves” scored a 67, while Marco Rubio’s “Disqualified” scored a 64. The Republican norm for Impact is 49.

Thematically speaking, the ads that are resonating with Republicans in this region are focused on strengthening our military and destroying ISIS, which candidate is most feared by Hillary Clinton, or faith-based Republican values. While the majority of these ads amplify being tough on the military, the high-scoring ad, “Midlands” adds a regional dimension by highlighting local army base Fort Jackson and the jobs it provides. Ted Cruz speaks to these people about something meaningful to their community and it clearly resonates. 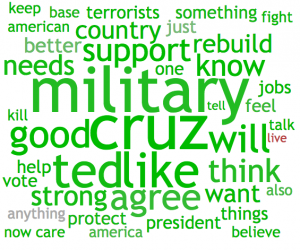 In “Disqualified”, Marco Rubio denounces Hillary Clinton’s ability to handle intelligence information and states he will “destroy ISIS.” Two other of Rubio’s ads, “There is No Question” and “Nobody Better” reiterate that he is the one candidate Hillary “does not want to face,” all the while emphasizing his expertise on national security. In a comparison of the word clouds in for Trump’s “Worst Kind” ad and “Disqualified”, it is clear that voters are accepting of Rubio’s criticism of Hillary Clinton, but not so much of Trump’s opinions on Ted Cruz:

“Beliefs” and “Blessing” stress the deep faith of Jeb Bush and Ted Cruz respectively, proving that this theme also resonates with voters in this region.

Through our open-ended question that allows viewers to say exactly what they think about the ad, we see a few trends emerge. Voters are more interested in hearing what candidates think about a variety of topics than hearing about a singular focus. Voters also react more favorably to a candidate outlining a concrete plan rather than to lip service. Lastly, voters appear to react negatively to attacks on fellow candidates. They would rather be convinced they agree with a candidate on issues and beliefs, rather than hear attacks on colleagues. Below are examples for each of the top three ads. 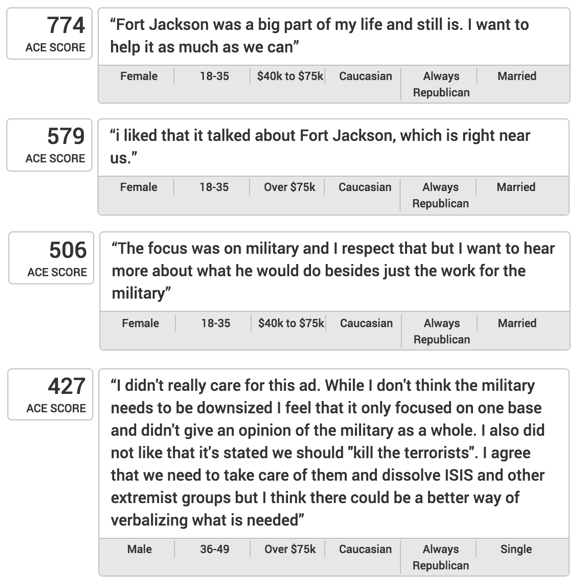 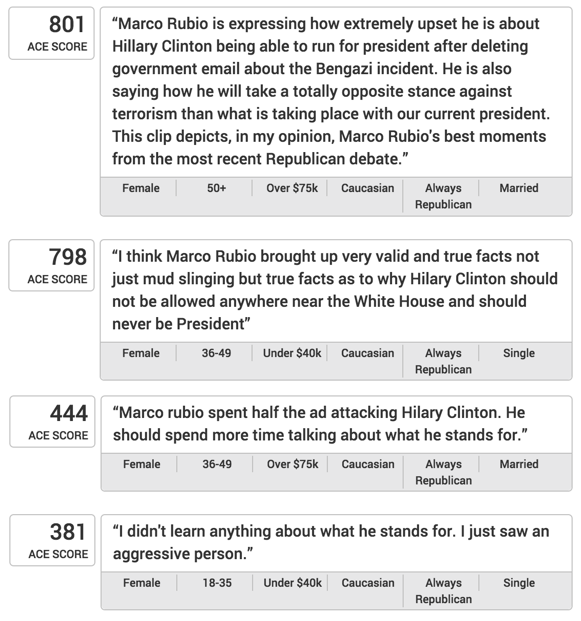 Cruz for President “Themselves” 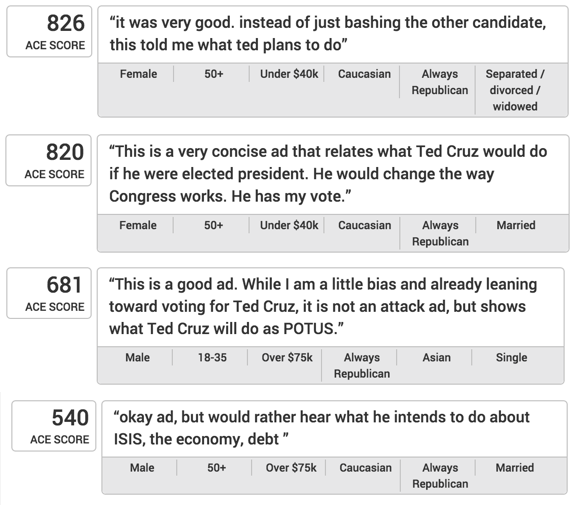 About Ace Metrix POLITICS
Launched in 2012, Ace Metrix POLITICS provides video ad effectiveness metrics and data to campaigns, PACs, and advocacy groups, based on 500 respondents per ad and a sample of national registered voters balanced to the US census. The data collected provides insights into the effectiveness of the ad, verbatim responses and the likelihood the ad changed the way respondents will vote.