After much anticipation, the Rio 2016 Summer Olympic Games are finally about to begin. Tonight’s Opening Ceremony marks the official start, and along with the meticulously orchestrated pomp and circumstance, advertiser dollars will be flowing. According to multiple sources, NBC expects to sell 15% more advertising than it did for the London games, and has already secured $1.2 billion in ad sales for Rio. With digital and social also on everyone’s minds, sponsors and non-sponsors alike will be putting their best foot forward with their video advertising.

Ace Metrix has already tested over 70 Rio Olympics video ads, dating back to February, with the majority beginning to air at the 100 day out mark in late April. We’ll be tracking creative effectiveness of ads throughout the Games, but thought we’d take this opportunity to give out accolades for excellence prior to the start of the official festivities. And, in the spirit of Olympic Gold, Silver, and Bronze medals, we’re looking at the top three ads in each category explored below.

Olympic ads are known to be highly inspirational and heartwarming, with fewer advertisers using humor to break free from the pack and get noticed. In the Olympic ads we’ve seen so far, just 10% are considered humorous. Three brands using humor effectively are Reese’s, Tide, and Bounty. The three ads described below all scored well above the current Olympics ad norm of 587, were highly Likeable, and saw humor reflected in viewer comments. It’s also worth noting that they all feature female athletes.

Reese’s “Lindsey Vonn: Summer Sports with Winter Olympian” received an overall Ace Score of 627, with an Emo Cloud (powered by NLP clustering of words in viewer comments) showing a high level of humor. Said one female 21-35-year-old viewer, “It was a very humorous approach to advertising the product. I would definitely watch the ad over and over because it is funny.

Also delighting consumers with humor were Tide’s “Simone Biles: Small Yet Powerful” and Bounty’s “Allyson Felix: Faster Than Kloe,” as evidenced in these comments

Best Use of Compelling Visuals

Again straying from the oft-used vehicle of heartfelt emotion, our pre-Olympics coverage saw three brands that mesmerized viewers with stunning visuals. GE, United, and Omega all introduced ads in which viewers called the “Visual Scenes” the Single Best Thing about the ad in overwhelming fashion. While overall performance of the ads from GE and Omega are slightly below the Olympics norm Ace Score 587, having one creative element stand out in this manner makes these ads memorable. 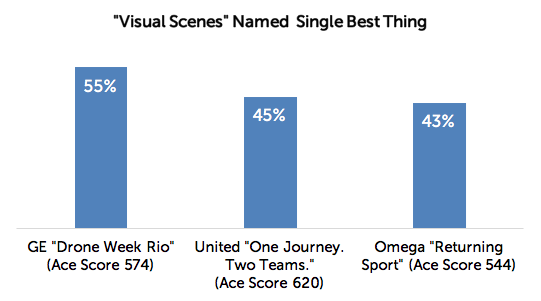 Of the visuals for GE’s “Drone Week Rio”, one viewer (F36-49) commented, “It was captivating. The visuals were excellent, and it made you want to be there. I hope I get to see more.” Said another (M21-35), “The visuals are stunning and provide a sample of what you can do with a drone. Excellent ad.”

Illustrating United’s impressive use of visuals, one M36-49-year-old said, “This is the single most innovative and creative ad I’ve seen for any product in any industry in a very long time! What a fresh and exciting way to blend the Olympics and United into an ad. The use of the music in a sambaesque remix really delivers the message. Thanks!”

Some ads seek to connect with viewers on a product level and instill product passion. Bounty, Pizza Hut, and Coca-Cola are successful in achieving this goal with their Olympic ads. The Ad Personalities below show that Desire and Relevance, with an added healthy dose of Likeability, drive these ads.

Most Effective Use of Inspirational Themes

Any Olympics ad conversation would not be complete without looking at the top-performing heartfelt and inspiring ads. According to viewers, these are the three to beat heading into the Games:

The level of pink (heart) words in this combined Emo Cloud for the three ads tells the story, as do the viewer verbatim remarks below: 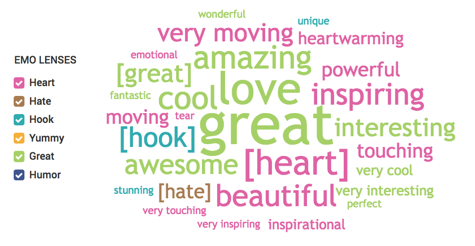 With the somewhat relaxed Rule 40 restrictions this year, many athletes are appearing in ads for multiple brands, regardless of whether those brands are sponsors or not. While the majority of ads contain at least one athlete, we have seen that ads with a group of athletes perform better than those with only one athlete (605 average Ace Score vs. 582.)

The exception seems to be gymnast Simone Biles, who is pure gold for any brand, either appearing by herself or in a group. So far we’ve seen her in 8 total ads for 7 brands, with an average Ace Score of 612. Her top three ads are:

Most Effective Ads from Official Sponsors

Ads from official Olympics sponsors make up 82% of the ads we’ve analyzed so far, with those ads drawing an average Ace Score of 589. Here are the top three sponsor ads by overall creative effectiveness (Ace Score):

Most Effective Ads from Non-Sponsors

Ads from non-sponsors form a much smaller sample of the ads we’ve analyzed so far, drawing an average Ace Score of 580, just slightly lower than sponsor ads. Here are the top three non-sponsor ads by overall creative effectiveness (Ace Score):

We look forward to the creative gems that will debut tonight and throughout the Games. Bring it on!!

Ad of the Week: BMW Delivers a Medal-Winning Performance with “Built for Gold”