Ad of the Week: BMW Delivers a Medal-Winning Performance with “Built for Gold”

The Olympics has delivered some great ads so far, but BMW’s ode to a Paralympics hero rises above the rest

The Olympics Opening Ceremony in Rio last Friday brought us no shortage of creative excellence, inspirational messaging and even a bit of humor—and those were just the commercials. I would be remiss not to mention the likes of Apple’s “The Human Family – Shot on iPhone” set to an epic poem written and voiced by the late Maya Angelou, and Dick’s Sporting Goods’ dazzling “Gold in US.” Both of these ads, developed by TBWA\Media Arts Lab and Anomoly New York, respectively, impressed viewers in Ace Metrix testing, though in different ways.

There are many others that could be in this conversation, but this week’s true standout ad for its incredible attention-grabbing capacity and message is BMW’s “Built for Gold.”

This minute-long spot, developed by creative agency KBS, brings us the powerful visual of four-time U.S. Paralympian Josh George training hard on a country road under the setting sun, in a performance wheelchair designed by BMW. Adding to the drama is an intense voiceover by actor Chris Pine, with lines such as “This chair was made for breaking things, like rules, stereotypes and world records.”

With an overall Ace Score of 599, the ad is in the top third of all Olympics ads we’ve tested so far (nearly 100 ads dating back to late-February), though its rankings are more impressive for specific measures. It’s the third most Attention-grabbing spot of all Olympics ads, behind P&G’s highly acclaimed “Thanks You, Mom – Strong” and Dick’s Sporting Goods’ “The Contenders.” With outstanding strength in not only Breakthrough but also Communication grades, BMW’s ad is in the top 5% of Olympics commercials for Information and the top 10% for Change. The Change measure is interesting because it indicates an ad has changed consumer perception of the brand. More on that later.

This ad uses a powerful combination of stirring imagery and clear message delivery to drive performance. No surprise then that the two creative devices named Single Best Thing by viewers are the Visual Scenes (29%) and Message (27%). These elements help the brand achieve what it set out to do, which in BMW’s words is to “Re-imagine, re-think, and re-define what it means to be an athlete.”The evocative visuals of the singular athlete, as finely tuned and one with his aerodynamically engineered wheelchair, clearly had an impact on viewers:

The Emo Cloud below (powered by NLP clustering of emotional words in viewer comments) also show high levels of inspiration and admiration, as well as ability to mesmerize viewers. 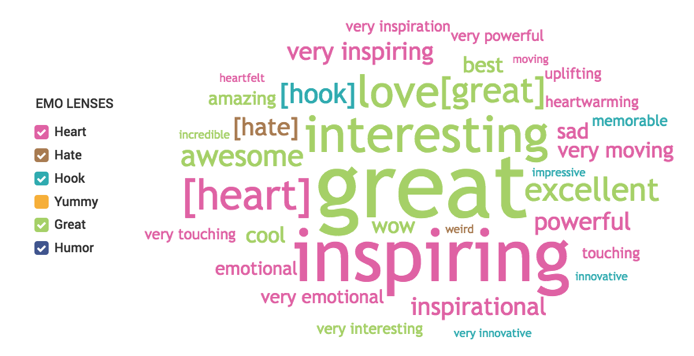 When we examine high Breakthrough Olympics ads, it’s clear that viewers also find many of them highly Relevant. These memorable stories are not simply inspiring, but relatable. Where BMW excels is in delivering key Information – the fact that it supports the U.S. Paralympics team and is dedicated to developing a racing wheelchair that captures the design and engineering of its vehicles – and in Change. These comments capture that spirit:

As the Rio Olympics play out, I’m sure we’ll see more outstanding creative, though brands will be hard-pressed to break through and have the kind of impact BMW had made with this one. It’s going to be cool to see them try.

Ad of the Week: The Iron Nun Inspires Us all in Nike’s “Unlimited Youth”