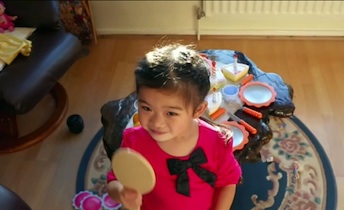 Dove “Camera Shy” is the follow-up viral video to Real Beauty “Sketches”, the 2nd most viewed YouTube ad for the month of April. As is certainly intended, the ad resonates strongest with females of all ages and of all incomes.  Females alone score the ad 682, nearly 50% above the Skin Care category 90 day norm. The 211 optional verbatim responses generate a deep green (positive) word cloud dotted with the words “cute” (15%), “message” (13%), love (9%) and respondents mentioning “dove” by name (10%). The ad continues to connect with viewers emotionally, as evidenced by the Emotional Sentiment score of 56, 17 points above the category norm and 12 points above the Dove brand norm. 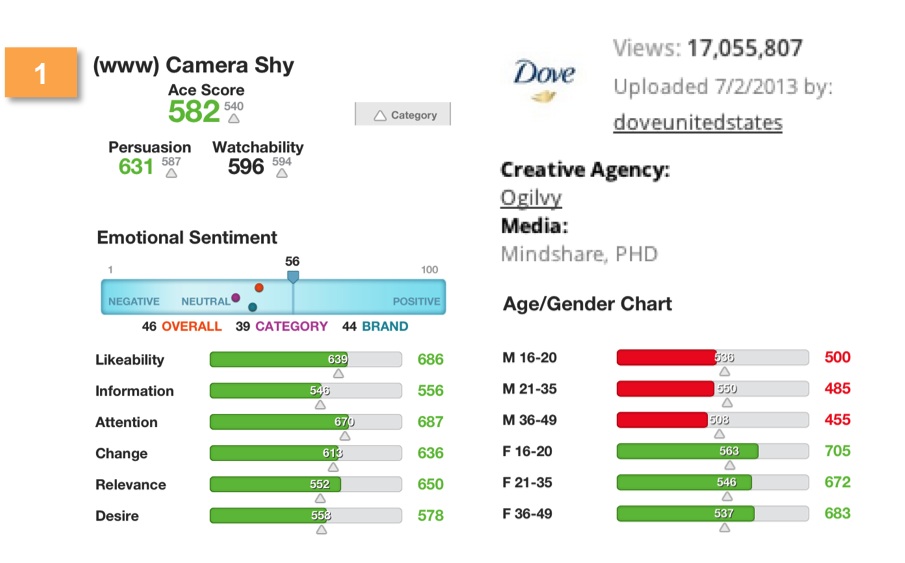 Samsung returns to the Leaderboard with the #2 most watched video “Flight Chat” (or what Ace Metrix calls “Airplane”).  Using humor to demonstrate the features of the Galaxy series has become expected in Samsung advertising and this ad gets a few laughs with 11% of verbatim responses including the word “funny”. The ad has broad appeal, working well across all age and gender breaks but scores best with Males 16-20. 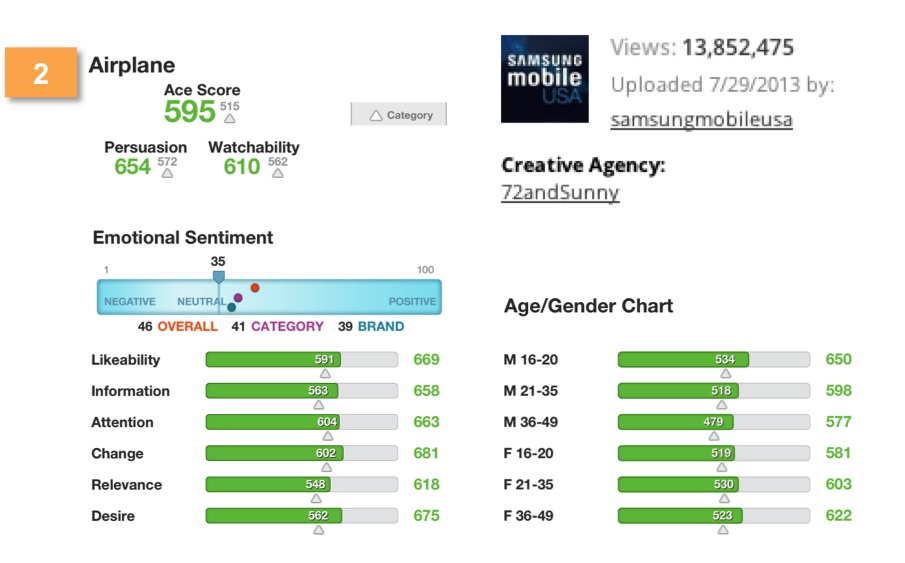 #3: Footlocker & Reebok “Conversation Lift”
Foot Locker and Reebok have brought together NBA Legend Shaquille O’Neal and hip-hop superstar Tyga to demonstrate their common interest in great looking shoes. Males 16-20 are unsurprisingly the group that scored the ad best, although the ad also had broad appeal, scoring 13% above the footwear category norm with females. The ad drew soaring Likeability and Attention scores and a whopping 28% found the ad “funny”. 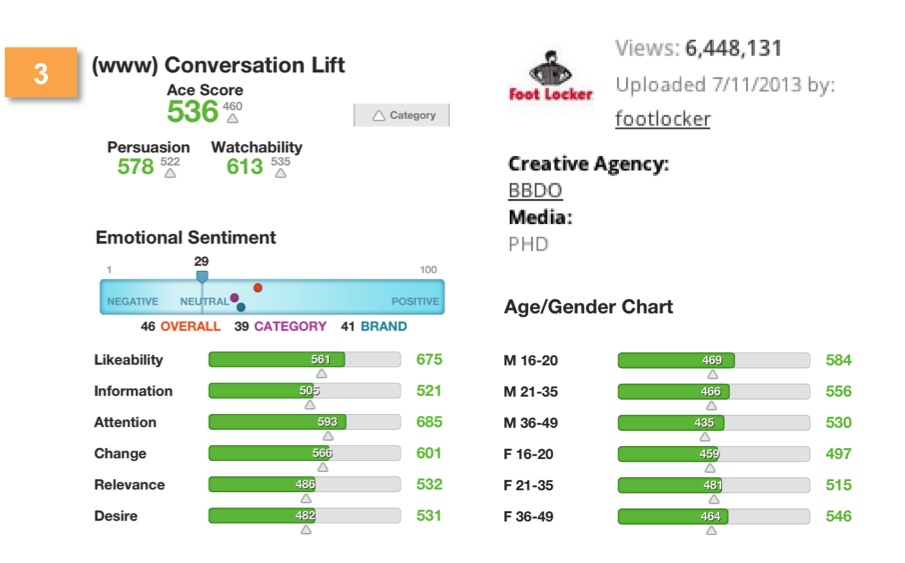 #4 Honda “Hands”
Honda “Hands” celebrates the curiosity of Honda engineers, which has led to some of the most successful Honda innovations over the past 65 years. It’s no wonder the ad went viral with a stunning 713 score for Attention (15% above the Non-Lux Auto norm) and high Likeability and Change scores as well. The Persuasive power of the ad struggles a bit with lower Information and Desire scores, and while 13% of verbatims mention Honda, they are done so in a mix of high and low scoring responses. Folks 21-35 scored the ad the highest while the older generation (50+) were less impressed. 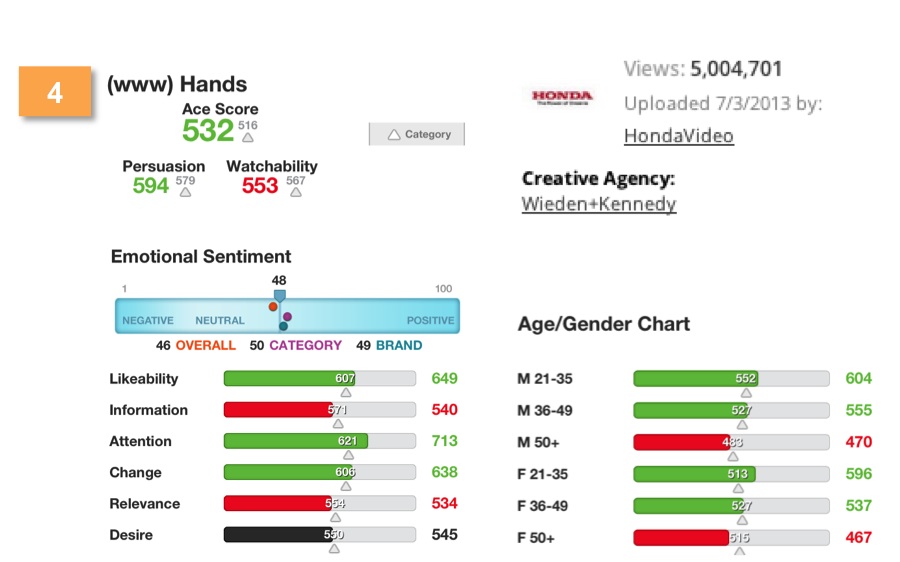 #5 Heineken “Departure Roulette”
Heineken poses the question to travelers, “Would you play Departure Roulette?”
This 2:54 spot earns incredible Attention score of 748, 22% above the Beer category norm as well as high Likeability, Change and Desire scores. 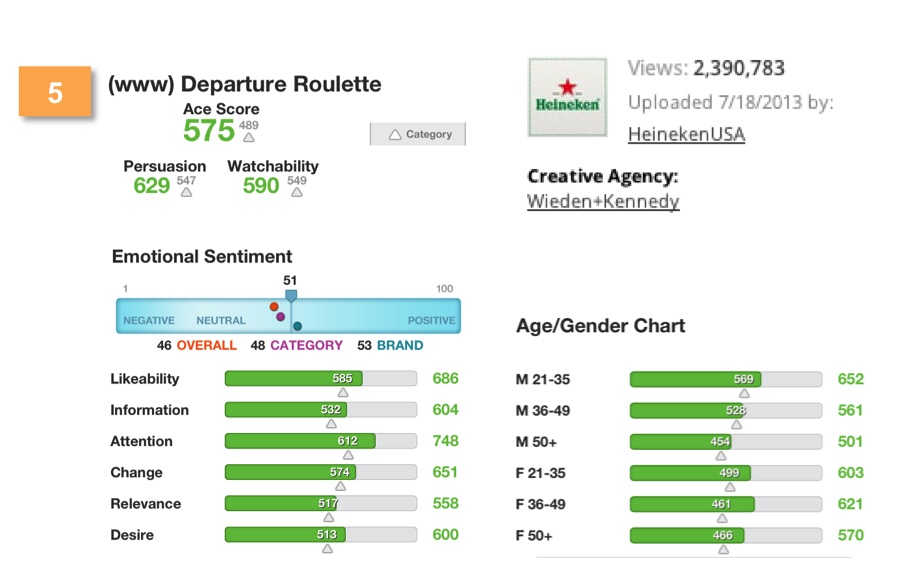 #6 Qualcomm “The World Without Mobile”
Qualcomm imagines a world without mobile – or at least, people attempting to use the features of mobile devices without a phone. The grabs the interest of people 16-35. While the ad captures high Attention and Likeability scores – it fails to deliver on Desire and Information, perhaps not necessary for this branding piece. Another “funny” ad goes viral with 32% calling it so in the verbatim responses while only 4 responses recognized the name Qualcomm from the ad and of those, 3 didn’t know what the company does/sells. 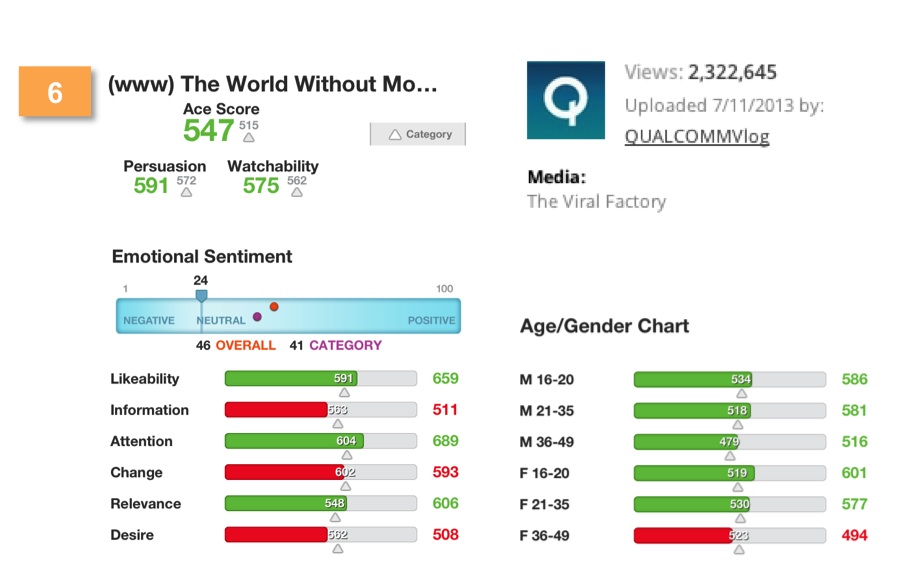 #7 K-Mart “Mama Jokes”
K-Mart returns to the leaderboard after its April winning ad “Ship My Pants” with another edgy ad that puts a spin on the age old children’s use of “Mama Jokes”.   As opposed the previous ad, this one seems to be narrowly appealing to Females 21-35. The “funny” theme continues with 19% saying so in the verbatims, with another 16% finding it “cute”. However, many of the verbatims indicate confusion, lack of brand association, and felt the ad was “disgraceful” or in poor taste. Another reminder that airing this kind of ad on TV, where its more likely to find men and women all ages can be a costly way for a brand to reach a few effectively. 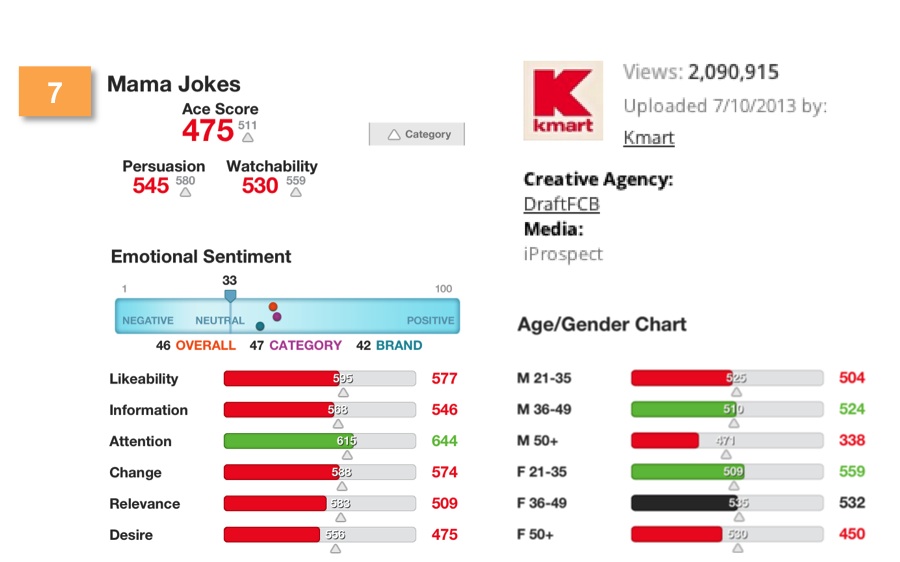 #8 YouTube “Geek Week”
A first on their own Leaderboard, YouTube makes an appearance with “Geek Week”, a top quintile ad with incredibly broad appeal. Men and women of all ages score the ad well above norm – but females score the ad 140 points higher. YouTube is mentioned by name in 16% of the verbatims and 17% call the ad “interesting”. Kudos to YouTube for demonstrating that good creative has broad appeal. The ad earned Desire and Relevance scores 21% above norm, components that are generally among the lowest for the other ads on this list – and interesting juxtaposition considering the survey respondents are a US census balanced general population sample (500+ people) and not necessarily avid YouTube users. 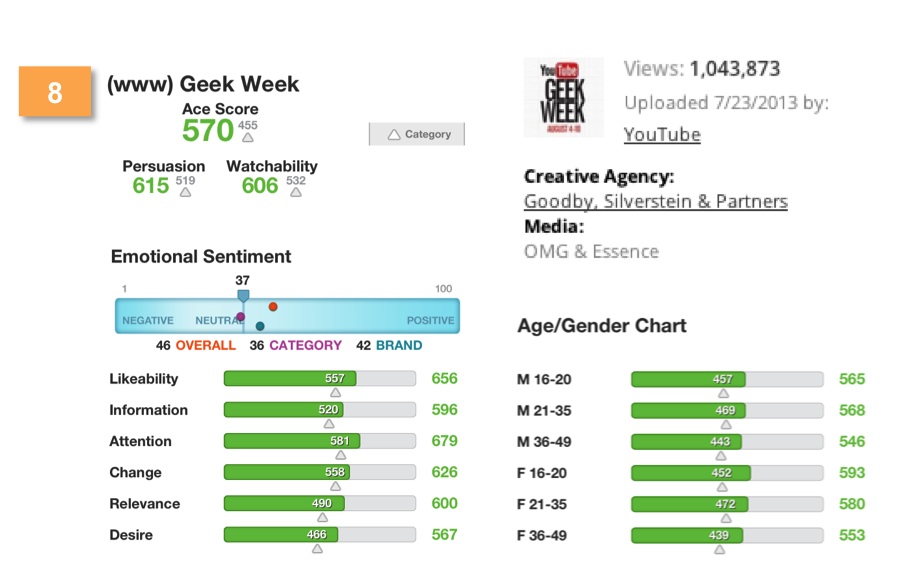 #9 McDonald’s “Despicable Me 2”, scores are not available.
#10 CGH “My Life as a Mom”
This ad is incredibly targeted, appealing to Females 21-35 and to households with children. A large portion of the general population surveyed found the ad “long” (25%) and “boring” (9%). The ad delivered above norm Information score but fell short are every other component. 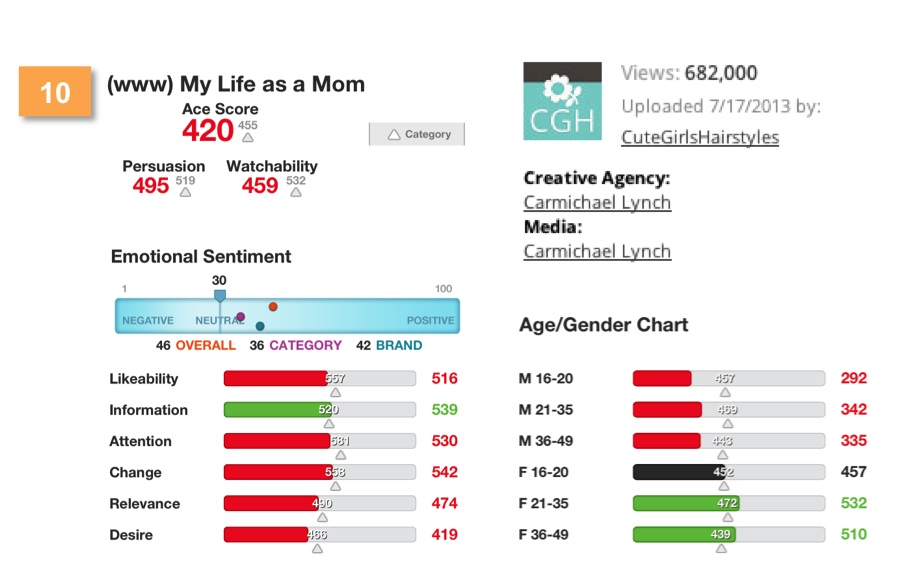 Ad of the Week: MasterCard “Saying Thank You”