Each month YouTube posts an Ads Leaderboard consisting of the ten most popular paid ads uploaded during the prior month. More and more these “ads” are more like feature films for brands – content you would not expect to see repurposed for television or another ad vehicle. Still, we like to take those pieces that are true ad creative and see how effective it is according to the general population.

YouTube views are inherently self selected – meaning those people chose to watch it. To be among the top ten of all ads viewed online in a month is a great achievement and speaks to the ability for that ad to resonate with a particular audience.

Ace Metrix scores are based on how everyone would respond to the ad, providing actionable data to marketers contemplating placing their online ads more broadly, digitally or in front of a television audience. To be both among the top viewed ads online and achieve a top quintile Ace Score or high Emotional Sentiment index is the remarkable confluence of great viral appeal and broad demographic appeal.  Here are three of the most popular YouTube ads for June.

Although this ad never ran on TV, maybe it should have. It scored 14% higher than the 0:30 version (which aired on TV) and 16% higher than the average World Cup ad. By cutting the ad down to 30 seconds, Adidas clipped one of the funniest parts of the ad—when David Beckham fakes caring about his broken trophy shelf to steal the ball. The 0:60 version, which had the third most views of any ad on YouTube in June, has an Ace Score 614, scoring an impressive 22% higher than the Footwear category 90-day norm.

Whereas most World Cup ads struggled to adequately relate to the general population, “House Match” was able to hold its audience’s attention while also scoring high on Likeability, Relevance and Desire.

Like some other World Cup ads though, the ad received much higher scores from men than from women. On average, males scored the ad 8% higher than what females awarded the ad. 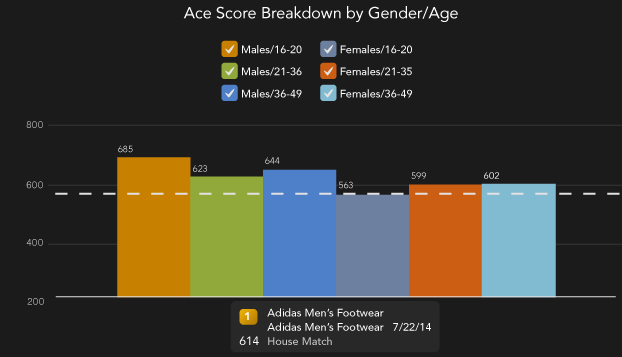 Nonetheless, it was obvious from the verbatims that including Beckham in the spot was still a win with women. Five percent of women who left an optional comment on the ad used the word “Beckham” and those women averaged an Ace Score of 656 for the ad. On the other hand, men appreciated the humor of the spot with 9% mentioning that they thought the ad was “funny.”

In Dove-like fashion, Always, a Procter & Gamble brand, created its own viral ad promoting a positive female self-image. Now, a month after the ad was first posted to YouTube, it has already accumulated over 42 million views. Impressive.

What is more impressive though, is the ad’s Ace Score, a very confident 724. While women certainly awarded the ad the highest, on average, Ace Score of 800, men also gave the ad a healthy Ace Score of 638, with younger men rating it the highest. Like many high-scoring ads, Likeability and Attention are the leading components. Attention even scored above 800, which is less than 150 points shy of perfect and nearly unseen in our database. Likewise, the ad’s scores for Information and Change were equally as remarkable, highlighting the effectiveness of this ad, which is all about changing people’s perceptions.

Of course, the ad’s message is at the forefront of the viral video, and our data show just how apparent and vivid that message is. Sixty-six percent of respondents indicated that the best thing about the ad was, indeed, the message.

Likewise, of the 391 optional comments left for the ad, 22% of consumers mentioned how much they enjoyed the “message” of the ad. Is this Always ad better than Dove’s similar ads? We’re looking forward to seeing if P&G releases similarly themed spots.

Dove, famous for its advertising exposés on female beauty, turned the tables this month to celebrate the important role fathers play in their children’s lives.

With an Ace Score of 648, the ad scored 21% higher than the Soap category norm. The ad has Likeability and Attention well above the norms, with Attention scoring 27% above the 90-day norm. Likewise, the ad’s scores for Change and Relevance scored well above the norm. Five percent of the 351 optional comments on the ad even mentioned how relatable the ad was in terms of situation and fatherhood.

The word cloud below reveals why the ad is so loved by consumers. Aside from being relatable, 9% of consumers mentioned how “cute” the ad is and 7% said that they “love” the ad. 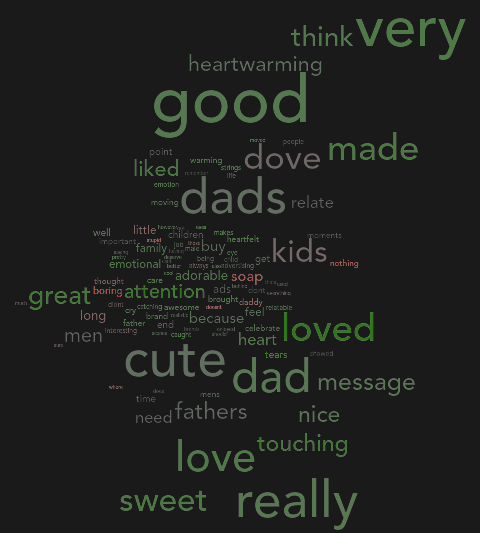 Additionally, many consumers used intensifying words such as “really” (9%) and “very” (10%) when describing their thoughts and feelings on the ad. This is usually a sign of the strong emotional response the ad elicited. Sure enough, the Emotional Sentiment score is 31% above the category average.

The ninth most-watched ad on YouTube last month was a dire plea from Dockers to stop the perpetual problem of “dad pants,” ill-fitting, baggie khakis. While we’re not sure how successful Dockers’ campaign was to eradicate the use of dad pants, consumers certainly enjoyed its humorous, satirical viral video.

The ad has an Ace Score of 604, which is a top-quintile score for the Apparel category. The demographic data reveals how well men responded to being the butt of the joke. While women, on average, rate ads just slightly higher, men rated “#StopDadPants” 3% higher than what women gave the ad. 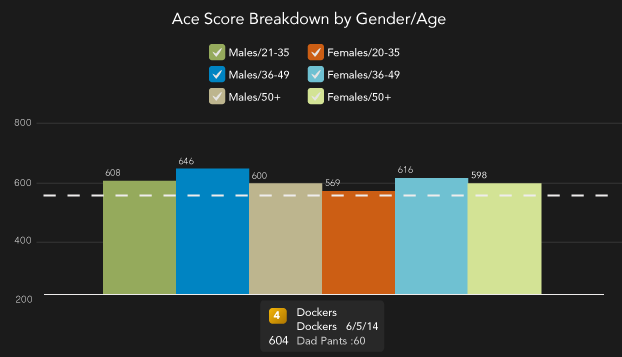 Both men and women alike found the ad humorous with 18% of consumers mentioning that the ad was “funny” in the optional comments they left for the ad. Thirteen percent even used the word “very” in their verbatim with the word “funny” being the highest used word with which it was paired. 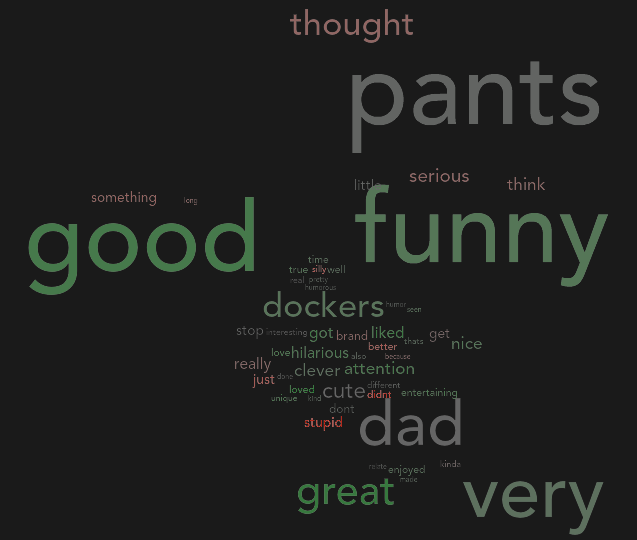 However, there were a few vocal consumers who found the ad “stupid” (2%)—likely comments from dad pant-wearers. Nonetheless, most consumers found the ad to be extremely clever. (We have to admit the viral ad even made the rounds at our office!)

Baskin-Robbins Scoops Up Brand to Watch