Born in the 1950s as a talking pitcher and learning to walk in the 1970s, the Kool-Aid Man has been a thirst quenching icon for America’s youth for the better part of a half century.  As a brand, Kool–Aid has grown dramatically over the years adding innovative products and new flavors while expanding around the globe. Together both the brand and the mascot have been able to adapt its advertising and products to the times, helping to keep Kool-Aid a popular beverages among American families.

Interestingly, our oddly-shaped friend is better today than he was several decades ago – at least according to our calculations. We had 500+ consumers score this ad and compared it to other, more contemporary creative from our database. This older Kool-Aid ad  from the 1970s scored well; however, this vintage look did not resonate as well as current ads.

Despite not scoring as well as the two current Kool-Aid ads from 2014, the ad did compare favorably to other brands in the category. The vintage Kool-Aid Man still scored 9% higher than the category norm for Instant Drinks ads. Kool-Aid’s Throwback Thursday ad outperformed Kool-Aid’s current ads on the dimension of Likeability – particularly among 36-49-year-olds. 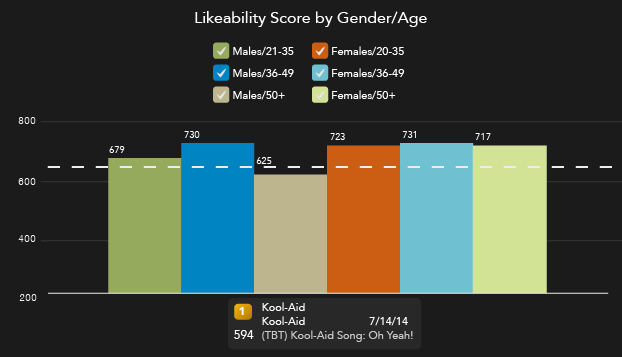 Yelling his timeless catchphrase, “Oh, yeah!” upon entering a scene, the Kool-Aid Man has grabbed people’s attention for decades now. This is apparent in the Attention scores awarded by the viewers, especially among the men 36-49 and women 21-35. The high scores in Attention and Likability are also reflected in consumers’ responses to our standard battery of Throwback Thursday custom questions. 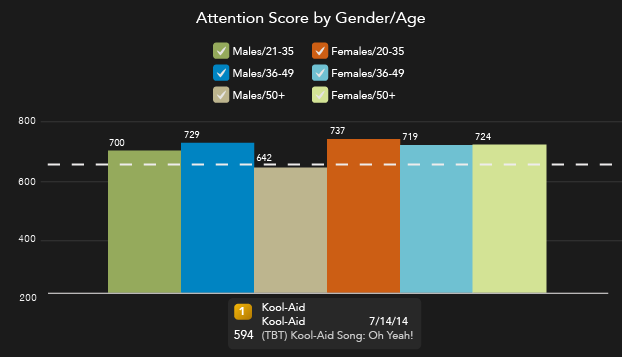 When viewers were asked if the ad reflects the brand’s values and ideas as they are today, an overwhelming 74% believed that the ad reflects the brand’s ideas and values “a lot,” while only 2% believed that the ad did “not at all” reflect the brand. It seems that with the continued use of the Kool-Aid Man the brand has been able to maintain its values and ideas as well as its relevance throughout time. The vintage ad also scored 4% higher compared to the brand’s current ads in the Relevance category. Many viewers were happy to see an older Kool-Aid ad featuring the vintage version of the Kool-Aid Man, because it brought back childhood memories of the brand. 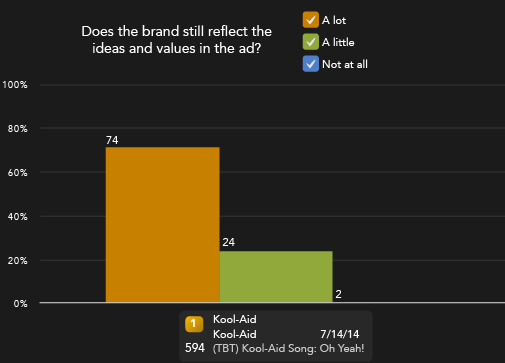 The Kool-Aid Man mascot brought back memories for many of the 500 respondents, whether they had drank it as kid or served it as a parent. It seems that not only the beverage was mentioned, but also the mascot, when consumers reflected on some of those treasured memories. The top words used in over 10% of all the responses included “love,” “vintage,” “good” and “old.” 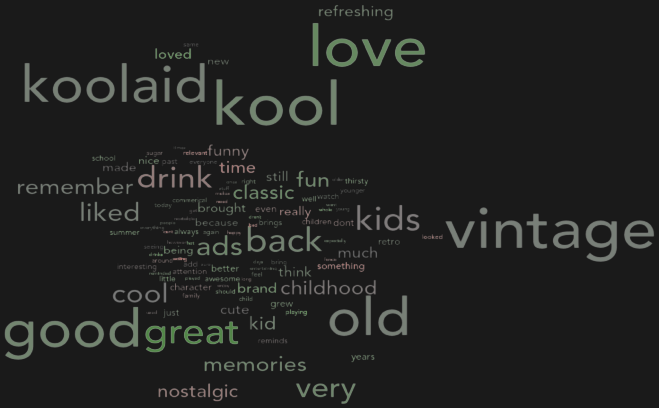 Kool-Aid has been using the Kool-Aid Man since the 1950s, and the brand icon is one of the oldest running children’s mascots ever. He became so popular that he had his own video game and comic books in the 1980s as well as being referenced in numerous TV shows and movies. While the vintage brand is still a winner, the updated version’s scores are evidence that America’s favorite walking and talking pitcher remains as relevant as ever for the young and young at heart.