Ad of the Week: “A Love Story” Signals an Emotional Comeback for Chipotle

The 4-minute animated film is Ace Metrix’s highest-rated QSR ad of all time.

Last week’s column focused on how Chili’s new campaign broke the mold of Casual Dining/QSR advertising with a journey back to the brand’s roots. Chipotle is another brand known for taking a unique direction with its marketing, using long-form animated ads with musical accompaniment and powerful messages about processed food, natural ingredients and sustainability. The brand’s third and latest, “A Love Story” lands in the rarified ranks of the top 1% of ads ever tested by Ace Metrix.

It’s well known that Chipotle has been battling image troubles since last year’s twin outbreaks of E. coli and norovirus. After the CDC declared the issue closed earlier this year, the brand launched a new marketing campaign to bring customers back and repair its image. As a brand dedicated to sustainability and “food with integrity,” Chipotle’s latest video is less about regaining consumer trust and more about core messaging. The 4:25 long-form ad has struck a chord with viewers, earning a remarkable Ace Score of 708.

“A Love Story” is the portrayal of two young entrepreneurs who build competing businesses from the ground up, at first using all-natural ingredients, but then falling prey to the trappings of big business. When each realizes that the empire they have built is a long way from what they intended, they shut down their “cookie-cutter” fast food chains, fall in love and open a “mom and pop” shop dedicated to fresh ingredients, complete with a food truck in the garden.

“A Love Story” is the highest scoring QSR ad we’ve ever tested. Even more impressive considering the ad’s length, it delivers on Breakthrough – that means high Attention and Likeability relevant to other measures – and Change, meaning viewers feel strongly that the brand is moving in a new direction. Attaining such performance is quite a feat for an ad of this length, though earlier Chipotle long form ads “Back to the Start” (2011, 2:15) and “The Scarecrow” (2013, 3:20) had similar Ad Personalities. While those both won Cannes Lions, overall creative effectiveness has grown with ad length. 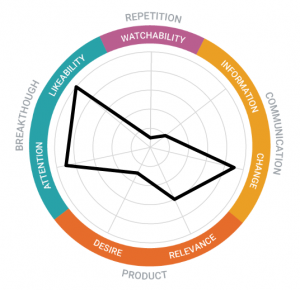 This high-production animated short was produced Passion Pictures and CAA Marketing. The soundtrack is a remake of the Backstreet Boys “I Want It That Way”, performed by Brittany Howard of Alabama Shakes and Jim James of My Morning Jacket. One could surmise from this musical choice, not to mention the aforementioned food truck, that Chipotle is looking to create a bond with the coveted Millennial audience. And it works.

Among Millennials (Ace Metrix’s 21-35-year-old segment), “A Love Story” is a bigger hit than “Back to the Start” and “The Scarecrow,” by 27% and 7%, respectively, in overall Ace Score. This Millennial audience found “A Love Story” half as polarizing as “Back to the Start.” Perhaps emotion factors into viewer agreement here, with the story of Evie and Ivan evoking more heartfelt terms in comments. Words like “moving,” “touching,” and “beautiful” are more prevalent for this work.

For “A Love Story”, we see the Visual Scenes and the Message named the two best things about the ad. Sticking with our Millennial audience, one viewer said, “The message is deep and resonates with my feelings!” Another commented, “The message of the ad was the best. It makes people realize that you should really care about the food you are eating rather than eating mass produced food where you don’t know where the resources are coming from.”

Clearly Chipotle has found a recipe for connecting with its audience on matters important to them. Branded content that is meaningful, entertaining and of value to viewers is always more to be watched through to completion, influence behavior and be shared among consumers.

A final high note for Chipotle: The ad not only scores a phenomenal 789 among brand loyalists, it also delivered a 705 among lapsed customers and brand considerers. This is excellent news for a brand looking to regain consumer trust and win back customers.

In a statement issued when the ad launched, Mark Shambura, Chipotle’s director of brand marketing said, “While we hope consumers find ‘A Love Story’ as entertaining as we do, we also hope it encourages them to think about how food is made.”

So far, all signs point to success on both counts.

The London and Sochi Olympics: A Look Back at the Ads that Inspired Us

Understand the Emotional Impact of Your Creative with Emo Clouds