The London and Sochi Olympics: A Look Back at the Ads that Inspired Us

At Ace Metrix, the Super Bowl is an annual holiday for us, with high-quality advertisements taking center stage. That event lasts roughly six hours, including pre-game coverage. So when the Olympics come around every two years, with brands in overdrive trying to grab the attention of massive audiences, we can barely contain our excitement. This year’s games have been dubbed “the biggest media event in history” by Mark Lazarus, Chairman of NBC Sports. With more than 6,700 hours of Rio Olympics events airing live on TV or streaming online, not to mention the introduction of relaxed rules allowing non-sponsors to advertise more freely, we expect to see more stellar ads than ever before.

As our anticipation mounts for the Rio Games, we thought we’d take a look back at the strongest Breakthrough ads from the past two Olympic games.

Procter & Gamble’s infamous “Thank You, Mom” campaign captured the hearts of the nation during the London 2012 and Sochi 2014 Olympics.  With undeniable excellence, the campaign delivered on Attention, Emotion, and Likeability, and set the Gold Medal standard for advertising in both Olympics.  There is no question of the brilliance of this campaign, as it dominates the top ads from both Olympics combined when ranked by Breakthrough capacity (strength in both Likeability and Attention scores.)

P&G was able to emotionally connect with viewers before the games began in 2012, and continued to build on that same connection throughout London and Sochi. P&G not only ran the most ads in terms of volume (they aired more than 60 pieces of creative in London 2012 and Sochi 2014 combined across all brands) but they also had the highest average Ace Score across ads in both games, demonstrating that this level of emotional engagement leads to overall effectiveness. The emotional word cloud below, mined from user comments from the top 10 Breakthrough P&G ads, gives us a glimpse of the emotional impact of these ads.

While P&G may have set the bar high, there were other sponsor brands displaying creative excellence during the London and Sochi games. Here we look at some of their most memorable ads.

Ads from official Olympic sponsors dominated both the 2012 and 2014 Olympics. On average, Olympic sponsor ads in both years scored 20 points (3.5%) higher than non-sponsor ads.  Let’s take a closer look at these ads that succeeded in breaking through and engaging viewers.

All of the ads on our list achieved impressive scores in Attention and Likeability, with some standing out in other areas as well.  Visa’s 2014 “Meryl & Charlie – The Gold Medalists” achieved the highest Watchability score of all top sponsor ads, meaning people are willing to invest their time in watching the ad again.  Nike’s 2012 “Find Your Greatness” received the highest Relevance component score by imparting on viewers – everyday people who may not perceive themselves as “great” – that we all have inner greatness.

Several sponsors chose to take a biographical creative approach, in which they featured an athlete competing in their sport from childhood through the Olympics.  This is a smart approach, as our data shows Olympics ads with athletes perform better than those without, with performance going up even more when a group of athletes is featured.

Visa was particularly effective with this strategy, utilizing a powerful voiceover by Morgan Freeman to celebrate athletes and their journey to the Olympics, and inspire viewers at home in “Meryl & Charlie.” These ads, namely “Meryl& Charlie – The Gold Medalists,” “Department Store Climb,” and “A Long Shot” effectively broke through with consumers, each scoring over 700 in Attention and Likeability component scores.  As seen in the image below, consumers were drawn to these ads, using words like “moving,” “touching,” and “inspirational” to describe all three ads. 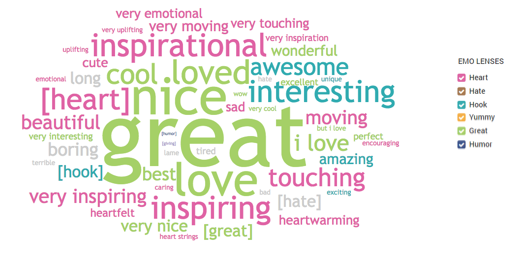 Perhaps some of the most memorable and enjoyable ads from the 2014 Sochi Olympic Games were Samsung’s “Going for the Gold,” which featured ordinary people re-creating Olympic sports in their homes to participate in the fun, and United’s “Hopes of a Nation,” which showed athletes boarding a plane in their uniforms. Both of these ads scored exceptionally well with viewers who have children, as parents connected with the story of athletes fulfilling lifelong dreams.

Yogurt brand Chobani, a new Olympic sponsor in 2012, used the stage to debut their first ever national TV ad. “Proudly with You” excelled in changing brand perception and communicating information, as it told the story of the brand from humble beginnings to “naturally powering Team USA.”

Floodgates Opening in Rio for Non-Sponsors

With changes made to Rule 40 by the IOC and USOC for the Rio Olympics, brands that are not official Olympic sponsors will be advertising more than ever. With that in mind, let’s take a look back at how these brands achieved greatness during the London and Sochi games.

Subway has long been known to feature Olympic athletes in their ads, and they certainly used that to their advantage in the 2012 and 2014 Olympics.  With three ads in our non-sponsors list, they definitely captured people’s attention with their use of tantalizing food visuals and Olympic athletes like Nastia Liukin and Michael Phelps.  The emotional word cloud below illustrates the feelings of hunger stirred up by these ads, though not everyone found the food imagery appealing. 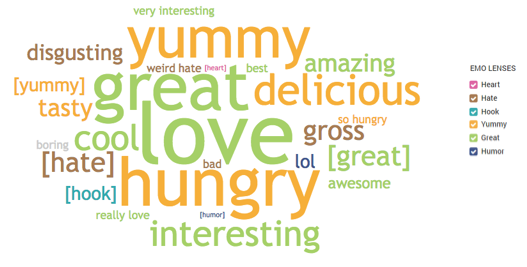 Another standout non-sponsor brand is SEGA of America, Inc., which produces the video game Sonic.  Their two top ads, “Mario & Sonic at the London Olympics” and “Sonic No Running,” featured its then-new game, Mario and Sonic at the Olympic Games.  Not only did these ads breakthrough with viewers, but “Mario & Sonic at the London Olympics” had the highest overall Ace Score, Desire, and Relevance component scores of all non-sponsor Olympics ads from 2012 and 2014.

Brands that are not official Olympics sponsors often have ties to athletes, as seen in eight of the ads on this list.  Some, like “Huge Air,” “Under Armour’s Job,” “Fastest Swimmer in the World: Ryan Lochte,” and “Run at the Speed of Bolt” featured the Olympians participating in their respective sports, earning high Attention scores across the board.

“Huge Air,” “Run at the Speed of Bolt,” and “Fastest Swimmer in the World” all performed exceptionally well with a younger demo, 16-20 year-old males, perhaps because viewers were inspired seeing male athletes at the top of their games.  These viewers used words like “great,” “amazing,” and “inspirational” in their comments.

With the new rules for advertising during the Rio games, there will be an influx of creative from brands like Under Armour – who is not an official Olympic sponsor, but does sponsor 250 individual Olympic athletes.  They have already released several spots (complying with the March deadline for starting campaigns), including the recent Cannes award-winning ad featuring Michael Phelps. While Under Armour is one of the most visible non-sponsors, many others will showcase Olympics ads this year, including General Mills, Adidas, and Red Bull. We’ll be watching to see which brands excel and which don’t make the cut. Stay tuned.

Ad of the Week: “A Love Story” Signals an Emotional Comeback for Chipotle