Ad of the Week: Gatorade’s “Never Lose the Love” Inspires the Young at Heart

The Cannes Lions Festival is going on this week and a large portion of our industry has converged on the French Riviera to revel in advertising brilliance and celebrate the best creative from the past year. Those who remain stateside can’t help but wonder how creative excellence is being shaped and redefined many time zones away. But we’ll talk about Cannes a bit more later.

This week’s high-performer is “Never Lose the Love” from Gatorade and TBWA/Chiat/Day L.A. The minute-long ad shows premier athletes such as Serena Williams and Usain Bolt being inspired to push themselves harder by much younger versions of themselves. The delightful parallel between Jimmy Durante’s “Young at Heart” and the tagline, “The best never lose that love”, contributes heavily to the ad’s charm. Of course, having cute children never hurts an ad’s likeability.

In terms of overall performance, the ad received an Ace Score of 640, which is 17% above the Sports Drinks category norm year-to-date. High Likeability and Attention scores are apparent, and expected, though Watchability and Relevance may not have been as predictable. Watchability measures a viewer’s willingness to view an ad again and is useful for gauging an ad’s optimal length. We usually see higher scores for shorter ads, :15s and :30s, with :60s not powered by this measure as often. This is because viewers typically don’t want to reinvest their time in longer form ads as much. Gatorade’s spot achieves something special here with a 676 Watchability score. Viewers are also able to relate to the inspiring message. Creative factors contributing to the ad’s Breakthrough capacity are the Visual Scenes, named the Single Best Thing about the ad by 27% of viewers, followed by the Message (18%.) One 36-49-year-old male viewer described the ad as “Visually effective. Kept my attention.” The Ad Personality below shows the ad’s greatest strengths. 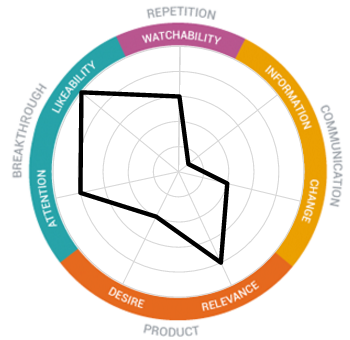 In terms of brand performance, this ad is also a great creative achievement. Ace Metrix has tested 89 ads from Gatorade since 2010, and “Never Lose the Love” is the second highest scorer, behind only “The Game Has Evolved” from 2010. That ad, introducing the new G Series line of products, received a 660 Ace Score, and was stronger in Information and Change. Generally, “Change” is an indicator of the company moving in a new or innovative direction. Coincidentally, Serena Williams and Usain Bolt were also featured in the spot, as was the late great Muhammad Ali.

Now, back to Cannes. We’ve recently embarked on extensive research aimed at understanding whether there are shared characteristics among Lions-winning video ads (or more precisely, Film Category winners) based on our creative measurement. We are planning to release the research soon after this year’s Cannes winners are announced. Gatorade’s “Made in New York” (also created by TBWA/Chiat/Day L.A.), a tribute to beloved Yankee Derek Jeter upon his retirement, won a Gold Lion in 2015 and is part of our study. “Made in New York” is an extremely memorable ad, and is similar to “Never Lose the Love” in many ways. That ad also achieved high Breakthrough in its Ad Personality, as seen below, though was not as strong in Relevance and Watchability. Again, with :90 ads, lower Watchability makes sense as viewers may not want to invest the time to watch the ad again. 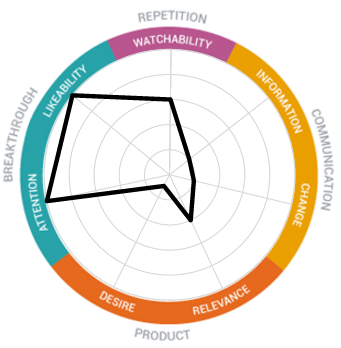 Both ads use iconic music, Frank Sinatra and Jimmy Durante, and both evoke strong emotion. Describing “Never Lose the Love”, viewers used words like “sweet”, “inspiring” and “cute”. For “Made in New York”, words like “touching”, “love”, and “cool” came through in viewer comments. One area these ads differ is in how polarizing they are. “Made in New York” has a Polarity Score of 63, compared to 35 for “Never Lose the Love” (the lowest 2% of ads we’ve tested.) As the two viewer quotes below demonstrate, viewer disagreement for the Derek Jeter tribute can be attributed to regional allegiances, while the more recent ad has broader appeal.

As for this week’s endearing ad, if Gatorade and TBWA/Chiat/Day L.A. submit it for a Lions in 2017, I wouldn’t be surprised to see it on the Shortlist or even win an award.

Ad of the Week: Gillette’s Father’s Day Film is Touching and Relevant

Ad of the Week: Mercedes-Benz Drives to ‘The Future’ with Style and Grace