Ad of the Week: Perdue’s “Jim Perdue: You Are What You Eat”

For the first time in Ad of the Week history, a meat brand, Perdue, wins the prestigious title. Not only does Perdue win, they win by a landslide with their animated ad, “Jim Perdue: You Are What You Eat” (Ace Score: 646). Jim Perdue tells us that his chickens are fed a 100% vegetarian diet as opposed to other brands that inject hormones and other unsavory items into their meat.

Not only did this ad beat the big AOTW players like the Casual Dining brands (second place is 24 points behind), but this is the highest scoring meat ad we have in our database. Males 36-49 scored this spot 23% above the meat category norm and was the top demo to use the word “good” in the optional 254 verbatim comments.

The ad also flaunts a high Emotional Sentiment score of 63, which is 19% higher than the average for the category. Component scores Attention and Likeability both came in over 700, but it was Information that had the largest gap to norm (16%).

Nine percent of viewers mentioned the name “perdue,” which is notable considering that the brand  does not exactly have the top of mind cache of an Apple or Wal-Mart. Respondents not only loved the attention grabbing animation, but they appreciated the message behind the ad. Perdue has now set a high standard for the category, which may prove challenging for competitors in the space.

This ad continues a theme we have seen this year around health and wellness.  The theme is on display most prominently in the Restaurants & QSR, Beverages, Packaged Foods and Candies & Snacks industries. Most recently aired are the Coca-Cola anti-obesity ads and the frequent “low-calorie” menu offerings at Casual Dining restaurants. Not only are brands in these categories promoting healthy alternatives, they are also emphasizing the importance of health and wellness to consumers.

Further, we have seen some top scoring ingredient ads from Domino’s, Taco Bell, McDonald’s and a few other QSR brands. These ads underscore new and healthier ingredients – just another way of connecting with increasingly health-conscious viewers. 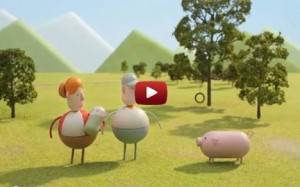 Finally, one cannot look at the Perdue commercial without thinking about the Chipotle ad from the spring of 2012.  That ad was part of the 2012 TED Ads Worth Sharing list and has a similar message to this Ad of the Week winner. The paper on the Chipotle ad and our contribution can be found here.