Sure, the audiences have fragmented considerably and the frequency required to deliver the reach has skyrocketed – but it doesn’t change the basic math, that television is where the eyeballs are and that’s where the dollars flow.

The online/on-television gap will continue to narrow but it is not really a zero sum game.  Television looks more weblike today than it did five years ago and the web looks more television like than it did just two years ago.  One medium will not “overtake” the other – they will, over time, merge.

Even in a merged world – advertising will be the fuel of great content experiences.  Television is “brought to you by” advertisers.  That’s not likely to change either with respects paid to Netflix, HBO and Hulu.

The opportunity in front of the media ecosystem is to do a better job at putting the right ad in the right place at the right time.  Advertising shouldn’t detract from the content, it should complement it.  This realization is in full swing in the digital world where “publisher as agency” shops are popping up left and right (Jim Bankoff’s just announced Vox Media’s in house agency. See their pitch here). 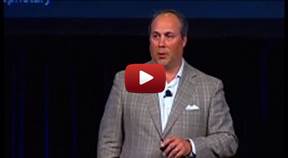 To be successful putting the right ad in the right place at the right time – you have to understand your creative as well as you understand your target.  The title of the talk that we did at Videonomics was called “Moving Past the Who to the With What” but could have just as easily been called “Know Thy Creative” because that’s the key point.  Knowing your creative deeply (your creative, your competitor’s creative – the entire landscape) leads to more informed media planning – and that leads to better business outcomes – which is why brands advertise in the first place.

Ad of the Week: Perdue’s “Jim Perdue: You Are What You Eat”