Ad of the Week: Samsung’s Stirring Anthem Might Be Just What the World Needs

Every two years, the Olympics comes around and makes the world seem a little smaller, if only for 16 days. And just as the athletes raise the bar on athletic achievement, so, too, do the sponsors raise the bar on creativity. (In fact, in my first Ad of the Week column, back in April, I showcased Procter & Gamble’s 2016 version of its “Thank You, Mom” campaign.) This year, the world’s advertisers are already delivering inspired creative in troves, both digitally and on television.

Last week, official sponsor Samsung released its marquee Olympic Games advertisement, titled “The Anthem.” Weaving together scenes of people around the globe singing lines from national anthems that are not their own, the ad strives to create one anthem for one world. It incorporates over a dozen anthems and includes six athletes from teams of different nations. The idea of a mobile technology company breaking down borders and uniting the world may seem like a stretch, but somehow Samsung delivers with authenticity. According to viewers in Ace Metrix testing, a little optimism might just be what the world needs right now.

The 1:40 highly visual spot, created with Leo Burnett’s Chicago and Sydney offices, received a stellar Ace Score of 651. It also had the highest Likeability and Attention scores of the week. By now you may be familiar with our Ad Personality, which is a visualization of the way an ad delivers on specific objectives relative to others. “The Anthem”, as seen below, delivers in three key dimensions: Breakthrough, Communication and Product. A likeable ad that viewers find informative and relevant forms an impressive trifecta. 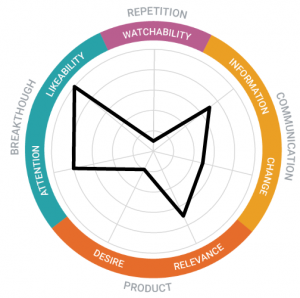 When we look at the creative aspects that viewers are most drawn to, the Visual Scenes were named the Single Best Thing about the ad (25%), though the Music and Message were nearly as dominant (21% each). With stirring visuals and a rousing anthem, the rave reviews are not surprising. These comments about the message show just how much viewers were affected by “The Anthem”:

Olympics ads are notorious for evoking a healthy bit of emotion. “The Anthem” is vastly successful in this area, and that contributes to the ad’s engaging disposition and memorability factor. This Emotional Word Cloud, developed from the emotive words used in viewer comments, shows just how intense connection to this ad is:

Millennials, a group known for wanting their brands to stand for something, had their heartstrings tugged the most by the ad. With over 50% of 21-35-year-olds using word categorized as being with “heart” in their comments, Samsung is getting great brand engagement from this key demographic:

Another data-driven observation about this ad is that it is non-polarizing, a trait seen in often in emotionally evocative, memorable ads. “The Anthem” falls into the top 2% of ads in the Ace Metrix database for viewer agreement.

Understand the Emotional Impact of Your Creative with Emo Clouds