Today we officially say goodbye to a dear friend. Love him or hate him, the Most Interesting Man in the World was one of the most successful advertising icons of our time. You’d be hard-pressed to come up with another character as synonymous with a brand, for as long, as this ultra suave guy. We’re not talking about cartoon characters or animals, we’re talking about a real live person, in this case Jonathan Goldsmith, who not only personified a brand, but was as memorable as he was interesting. Dos Equis, owned by Heineken, says the character will return this year, but in the form of a younger actor, who will have some very large, and undoubtedly stylish, shoes to fill.

And so, on this day, when his very last Dos Equis ad is laid to rest, we take a look back at the man, the myth, the legend. We could talk about how for the 44 of his ads that we’ve tested since 2009, the average Ace Score was 456 (11% below our current norm for the Beer category.) We could mention how among women his ads performed even lower, averaging a 413 Ace Score. Heck, we could even mention how the average Polarity Score for his ads is 62, meaning people really did love him or hate him.

But we know you should never speak ill of the “dead” so we’re going to highlight the positives of this man and this extraordinarily high breakthrough campaign.

Effectiveness of the Most Interesting Man Campaign Among Core Beer Drinkers

Core beer drinkers* find our hero more palatable than the general population. For this group, we see an average Ace Score of 552, 8% higher than the Beer category norm. Among this group the beloved character clearly drives affinity, with “Characters” overwhelmingly named the Single Best Thing about the Ad (by an average of 26%.) Beer drinkers also have higher agreement about the campaign, with an average Polarity Score of 53.

In terms of the Ad Personality for this adored human personality, the images below are fairly typical. We see high very Breakthrough prevalent in 70% of his ads, with Desire a driving force in 84%.

The farewell ad, “Adios Amigo”, which portrays our friend taking a one-way trip to Mars, is the highest scoring of all TMIMITW ads in our system among these core beer drinkers, with an impressive Ace Score of 646. It also has the lowest Polarity Score of all the ads among this audience, 33, indicating there is more agreement about this ad than all others. Where we really see the emotional impact he’s had is in the viewer comments, where a common theme is sadness over his departure. Here are a few examples, which also demonstrate how a longstanding theme can leave viewers wanting to watch the next “episode.” 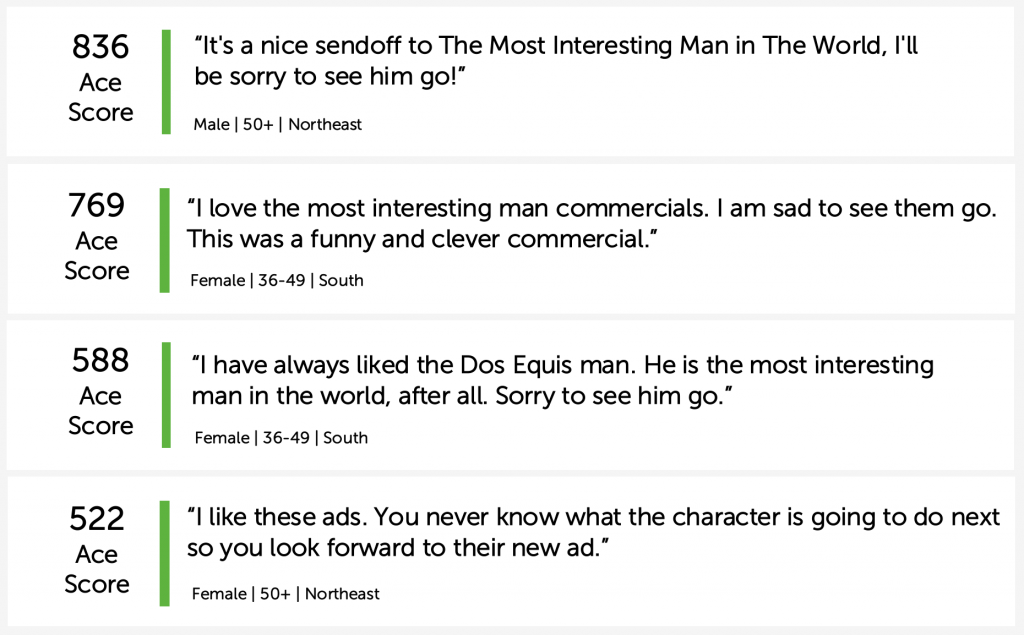 In focusing on the ads, we haven’t even touched on how the Most Interesting Man helped Dos Equis’ sales double, or the explosion of internet memes based on him since his inception. His effect on pop culture has been palpable. For that, and for all of his miraculous feats, he will be missed.