“It takes someone strong to make someone strong.” With that powerful, emotional ending, Procter & Gamble’s latest installment of its “Thank You, Mom” Olympic Games sponsorship campaign is likely to send chills through viewers and inspire them to share the ad with friends. The two-minute spot, “Strong“, created by Wieden + Kennedy Portland and released online last week, focuses on the journeys of four Olympic athletes, highlighting the incredible strength shown by their mothers to help them get to the Rio games.

“Strong” is the continuation of the brand’s sponsorship with the Olympics, dating back to the 2012 London games’ edition “Best Job,” and slated to continue through 2020. The 2012 spot won the Emmy for Commercial of the Year, as well as Gold at Cannes. For the 2014 Sochi games, the offering was “Pick Them Back Up“, which was a Bronze winner at Cannes. Much like medals for Gymnastics and Diving, awards for creative excellence are decided by a panel of judges, but brands and agencies are likely more interested in how the ad is received by their target consumers.

That’s where my company, Ace Metrix, comes in. We test every nationally airing television ad, as well as most digital video ads, with a panel of 500 respondents who complete standardized surveys that assess the ad both quantitatively and qualitatively, providing rich insights by demographic segment. Ads are scored on seven fundamental measures that are most likely to influence consumer behavior, which then gives us the Ace Score – a holistic measure of effectiveness ranked on a scale of 1-950. Verbatim viewer responses give additional insight to shape qualitative measures such as emotional sentiment and brand recognition.

Enough about us, let’s get back to “Strong.” Of the three ads in P&G’s “Thank You, Mom” campaign, the 2016 version received the highest Ace Score, 653, which is 19% above norm for all industries. That’s an impressive score. While “Strong” had the highest score, both “Pick Them Back Up” and “Best Job” were also high performers with Ace Scores of 645 and 635 respectively. Not surprisingly, all three ads perform a bit better among women, by an average of 14%, and among people with children, by an average of 19%.

Clearly viewers are responding to these ads, let’s look at why.

The visual representations below, called an Ad Personality, illustrate the relative strength of each of the measures we use to understand how an ad achieves specific objectives. These show us that two of the ads are quite similar in what powers them – very high Attention, Likeability and Relevance to viewers. 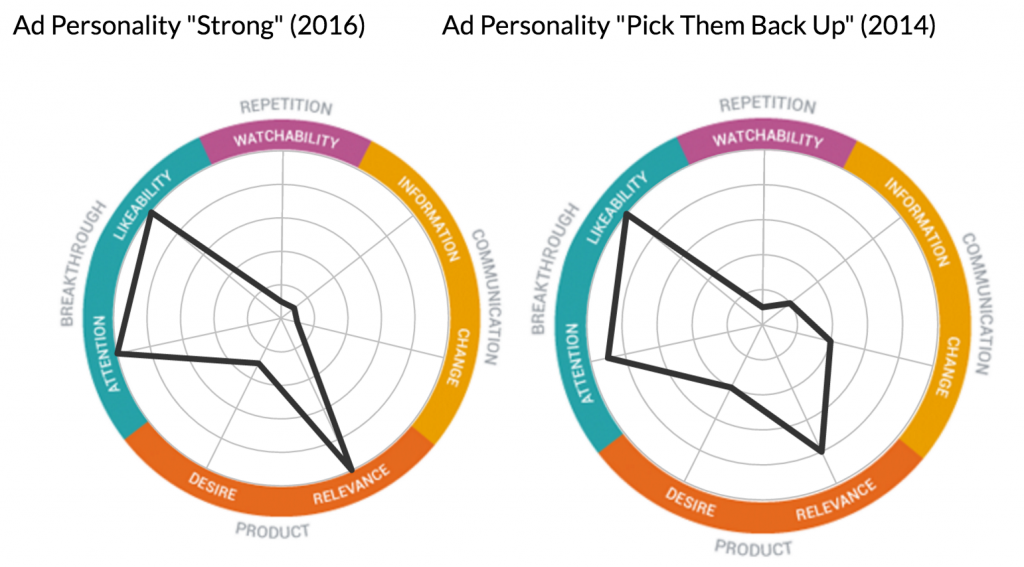 High Attention and Likeability capacity is great, but making an intense emotional connection is where P&G’s Mom ads truly excel. You can’t tell me you’ve watched these all the way through and not felt something. But let’s look at the data. Our panel for “Strong” returned 455 optional viewer comments. Words used that demonstrate the ad tugged at heartstrings, such as “moving”, “inspirational” and “powerful” (represented in pink below) made up an overwhelming 47% of all emotional words in comments. Terms of admiration, always nice for a brand, including “great”, “love”, and “wonderful” (shown in green) made up 34%. Of course there will always be the haters (see purple words), and for this spot, they mostly take task with the length of the video.

By continuing to put out creative that the majority of people can relate to and find moving, P&G is bringing their support of moms everywhere front and center. Using data as a proxy for critical acclaim, I have no doubt that before any athletes take the medal stand in Rio, P&G will be a strong contender for taking home more hardware for this installment.