What happens when a travel services company combines stunning visuals of the City of Lights with a compelling message about living in Paris like a local? In the case of Airbnb and their latest television spot, “Don’t Go There. Live There,” they delivered a standout ad for the week of April 16-22. Created by TBWA/Chiat/Day L.A., the new 60 second ad is based on the concept that visitors to destinations have a preference for living like the inhabitants of the locale rather than like tourists in hotels full of other tourists.

Airbnb received one of the highest Ace Scores of the week, 609. The score is 14% above the norm for the Travel Services category, making the ad a category standout as well. Comparing this ad to other Airbnb television and digital ads of the past two years, it is their biggest breakthrough spot, a full 25 points above the next closest ad, “Airbnb” from a year ago. That ad had a similar theme but wasn’t as successful at grabbing attention or driving desire.

Looking at the overall scores for “Live There”, it exceeds category norms in every component measure (Attention, Likeability, Watchability, Information, Change, Desire, and Relevance), with the largest differentials for Information (18%) and Desire (14%.) The Ad Personality chart below goes beyond scores to show the relative strength of each measure for the ad and demonstrates how Airbnb achieves specific objectives. The ad shows high Breakthrough capacity, in addition to excellence in communicating and delivering product passion. 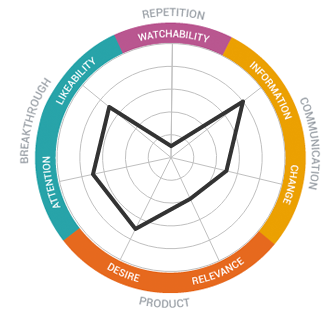 Another strength of this ad is the consistency in viewers naming the Single Best Thing about the Ad. Given a choice between Characters, Visual Scenes, Music, Brand, Product Itself, Deal or Offer, or Message, 35% said Visual Scenes and 18% chose Message. Viewers of the ad were drawn to the imagery of travelers immersing themselves in the places they visit – whether cooking at home, shopping in local markets, or simply napping on the couch. These gorgeous visuals helped convey the strong message, along with a simple, direct voiceover that also helps capture the imagination.

If Airbnb was looking to make a connection with Millennials, the ad succeeds on this level. “Live There” proves to be most effective with the 21-35-year-old crowd, while those 50+ may be a bit skeptical of travelling this way. According to one woman 21-35, “I really enjoyed this ad and it really relates to me because it starts off talking about getting an Airbnb in Paris and I did that myself last summer. I love traveling and experiencing places rather than visiting them. I think this ad really appealed to that. The visuals were great.”

When we segment the 50+ group further, we see it is actually the men of this generation that appear least interested in this method of travel, with the ad scoring 499 among this demographic. According to one such viewer, Airbnb is a “fairly new concept, hard to relate for some people.”

We’ve found that ads that connect emotionally with viewers are those that most often sought out and shared. Through word mining of viewer verbatim comments, we see the degree to which this ad struck an emotional chord. Terms of admiration such as “great,” “love,” and “wonderful” are used in great abundance.  Words that demonstrate the ad’s ability to hook viewers, such as “interesting,” “exciting,” “stunning,” and “clever” are also used with high frequency. Words like “beautiful,” “poignant,” and “moving” indicate that the ad also tugged at the heartstrings to some degree.

Looking at the measure of Polarity for this ad, it falls into the low to medium range with a score of 47. We often see that high viewer agreement, or a low Polarity Score, is a key ingredient of a successful ad. This is not to say that a polarizing ad that sparks debate won’t be successful, but data shows that high viewer agreement for an ad is more the norm for high performing ads. While Airbnb’s dynamic spot demonstrates some level of viewer disagreement, we can attribute much of this to the lower scores by the male 50+ audience, as previously mentioned.

Among Airbnb users, the ad clearly resonates, with an astounding 809 Ace Score. The good news for Airbnb is that among those who have never used their service but say they may consider it in the future, the ad received a score of 704. Equally important is the fact that this audience of brand considerers makes up 49% of our 500-person panel. The brand does an excellent job at reaching these consumers. Open-ended response to the question of who the advertiser is led to 73% brand recognition, which is also stellar.

This piece of effective creative hits on all cylinders. In addition to strong breakthrough ability and scores, connecting with a core demo, emotional cache, and viewer agreement, the new Airbnb message does a killer job among brand considers and shows high overall brand recognition.

If this is the beginning of a lengthy brand campaign, Airbnb is off to a great start! If they continue using a similar formula, as well as consumer insights, to develop their video creative, we have no doubt the campaign will be a winner.