Americans are United in COVID-19 Attitudes

With state governments exerting more control, and constant squabbles amongst various layers of Government, one would think Americans are more divided than ever. But as of April 30th, they’re united in their attitudes toward the coronavirus pandemic and its economic impact and are also showing tremendous cooperation rates in social distancing and other behaviors.

Leveraging our survey speed and size, Ace Metrix is keeping a pulse on US consumer sentiment in response to COVID-19. We added the following questions to our surveys, allowing us to collect data from close to 20,000 unique respondents per week.

Overall outlook from Amercians in terms of job security, personal impact and social distancing behaviors show signs of hope, with remarkable consistency. Job fears remain unchanged in weeks and a vast majority are still cooperating with new social norms. Very little variation across demographics further indicates that US consumers are on the same page for the most part.

What is your fear level regarding effects on your job due to COVID-19 (Coronavirus)?

Among Gen Pop respondents, fear increased most significantly from March 15th through 17th and again March 20th through 25th. On March 15th, the CDC banned nationwide gatherings of more than 50 people for an eight-week period.

However, attitudes towards employment have remained relatively stable since then despite the barrage of positive and negative news simultaneously projected and the massive increase in unemployment claims. Case in point, job fear levels were unaffected when officials announced on March 29th that social distancing guidelines would be extended through the month of April as well as the weekly unemployment claims updates.

Breakdowns by gender and region didn’t reveal any large differences, meaning all groups felt the same level of fear. As for attitudes among different age segments, fear levels were highest among 21-35 and 36-49 year olds. This makes sense given they make up the largest segment of the workforce and represent the highest earning years. The only age group that trailed significantly were those 50 and older, whether that’s because many are already retired or less likely to be impacted because of “seniority” at work: 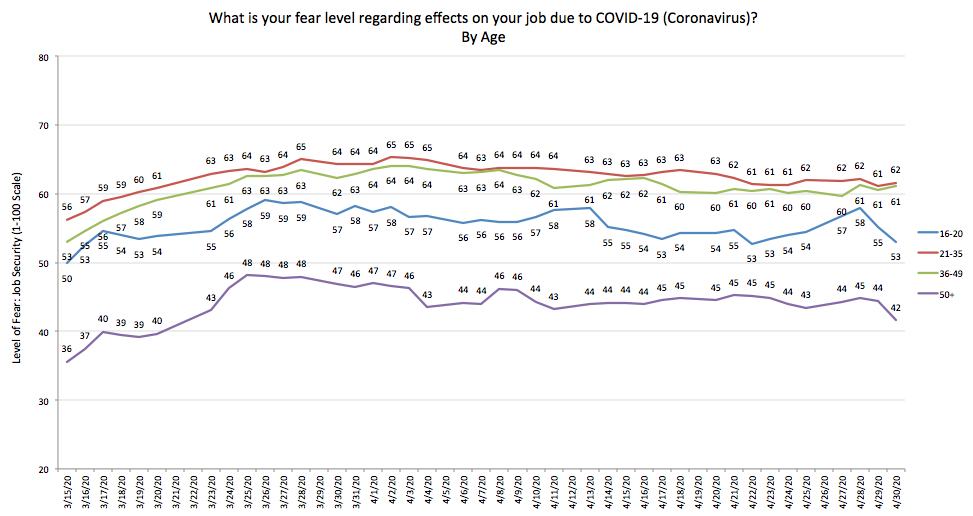 The stability is remarkable. Unlike the stock market, American attitudes are very stable, not spiking or suddenly feeling less worried.

How long do you expect COVID-19 (coronavirus) to affect you personally?

In addition to (and partly because of) its economic impact, COVID-19 is taking an emotional and physical toll on Americans, whether they catch the virus or not. Gauging how long individuals expect personal ramifications to last gives us an idea of how hopeful they are. So far, they remain optimistic. 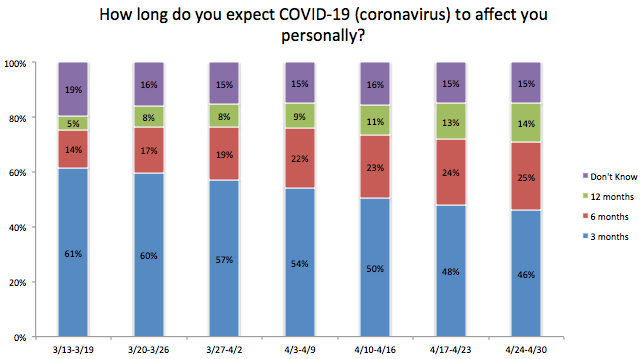 Hope is steady — 71% of respondents believe the impact of COVID-19 will be 6 months or less!  While there has been some shift from 3 months to 6 months, it is remaining relatively consistent. Further, only 14% believe the personal effect will be 12 months, although that continues to increase week-over-week as stay-at-home orders remain in place.

What level of “social distancing” are you practicing right now?

Overall, a majority of consumers were (and still are) expressing cooperation with social distancing orders and show no signs of weakening those efforts. Seventy-three percent of the population are practicing strict social distancing as of April 30th. 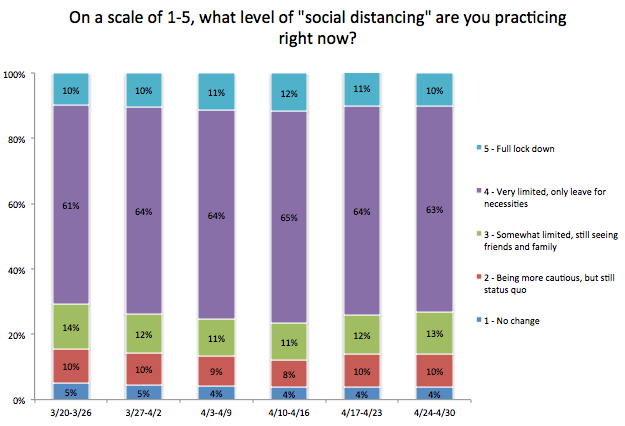 The percent of respondents practicing strict social distancing (options 4-5) peaked the week of April 10th through 16th. Those deemed “essential workers” likely make up a portion of the roughly 12% that either haven’t changed or are being slightly more cautious while still maintaining the status quo.  So overall, the vast majority of Americans are doing their part to protect themselves and their neighbors (albeit self-reported).

There were some behavioral differences across several demographics. On average for the week ending April 30th, more females (78%) were practicing stricter social distancing behaviors (options 4-5) than males (68%).

Those 50 or older followed social distancing orders best — likely a result of their “at-risk” status, and lower levels of employment. On the other side of the spectrum, the youngest audience (16-20 year olds) were the most defiant in terms of still seeing friends and family. However, most of them were practicing stricter social behaviors on par with those ages 21-49: 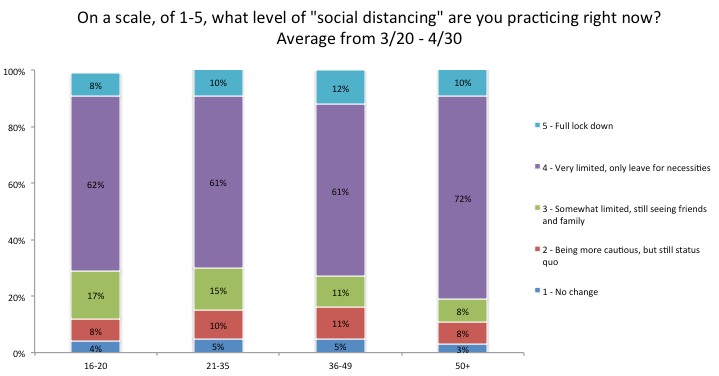 So not all 16-20 year olds are on “spring-break-the-rules.” Our research shows this demographic is the toughest audience for COVID-19 advertising.

As it turns out, despite all the finger-pointing, hyperbole, grandstanding, fake outrage and drama, Americans actually are all in this together — of one mind, concerned but hopeful and  very cooperative. You Go America!

However, this all could change quickly as patience runs out. Check back for our weekly updates.

Gen Z is the Toughest Audience for COVID-19 Ads. Here’s What Works with Them: