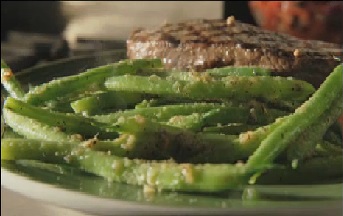 Appearing for the first time on our list in 2013, Applebee’s takes the honors with “Greenbeans :30,” which begins with what seems like a departure from the typical casual dining ad format – a chef in a field of green beans – but ends with a tried and true steak roasting over a fire (Ace Score: 630). With an Ace Score 10% above the Restaurant norm and 23% above the Overall norm, the ad successfully grabbed the attention of viewers and reminded them of the always delicious entrees available at Applebee’s. The ad skewed older, with Females 50+ awarding the ad an Ace Score that was more than 100 points over norm.

The component scores Desire and Relevance both came in well above norm and 6% of the 244 respondents used the word “want” to describe the ad. Eighteen percent of viewers spontaneously mentioned the brand “applebees” and 12% used the word “fresh.” Some of those respondents wrote:

This Ad of the Week winner humorously used a “bait and switch” approach to get the audience’s attention, and it worked. Is it dinner time yet?

Just three points shy of Applebee’s was Samsung’s “Graduation Day” ad for the new Galaxy S4. Given the premise of the ad, it’s not unexpected that Males and Females 16-20 scored the ad higher than every other gender/age group. Not only is it the second highest scoring ad this week, but it also beat Microsoft’s “Coming Together” ad for the Windows Phone by a substantial 40 points.