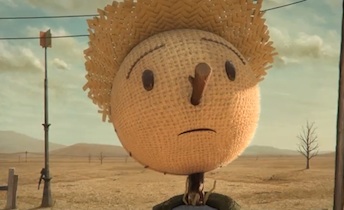 A few weeks back, we debuted our brand to watch category by looking at Netflix.  This installment features Chipotle, whose advertising is like its food – full of natural goodness but not mass produced.  In fact, we only have two ads from Chipotle, but both are meaningful.

There is really no one quite like Chipotle in the Quick Service Restaurant (QSR) or Casual Dining Space.  They are a breed apart both in terms of concept, growth rates and message – and the # of television spots they run.  In fact, they don’t really do TV– having only run a handful of executions of their groundbreaking debut ad, “Back to the Start” – including a spendy little two minutes during the Grammys in February of 2012.    But they are back with a new ad – and it is really interesting.  The latest installment also speaks to how far Chipotle has come in just a year and how that can impact a consumer’s impression of the brand.

First – a quick look at the ad that started it all – “Back to the Start.”

Despite the limited airtime, the critical acclaim for that “Back to the Start”  was nothing short of extraordinary, winning awards from TED’s Ads Worth Spreading, the Wall Street Journal’s top ads of 2012 and of course a Grand Prix at Cannes to complement a host of other hardware.   While the ad crushed it with the judges, it struggled somewhat with the public, scoring below norm in the highly competitive QSR category.  Despite the slightly depressed overall score – the ad still had plenty of bright spots including a towering Attention score – impressive given the length of the ad.  What hurt it overall were the Relevance and Desire score – usually elevated for QSR but not here.  The ad also did well younger – to be expected.  The verbatims provide some nice context and reflect the general sentiment, strong message content, somewhat difficult for the average American to digest…

The second offering, however, leaves a much stronger impression with consumers – delivering an even stronger Attention score while blowing away norms for Relevance, Change and Information.  The ad skewed younger again, but this time, every demo beat the norm – even grumpy males 50+.  Again, the verbatims are illuminating – check out a sampling below: 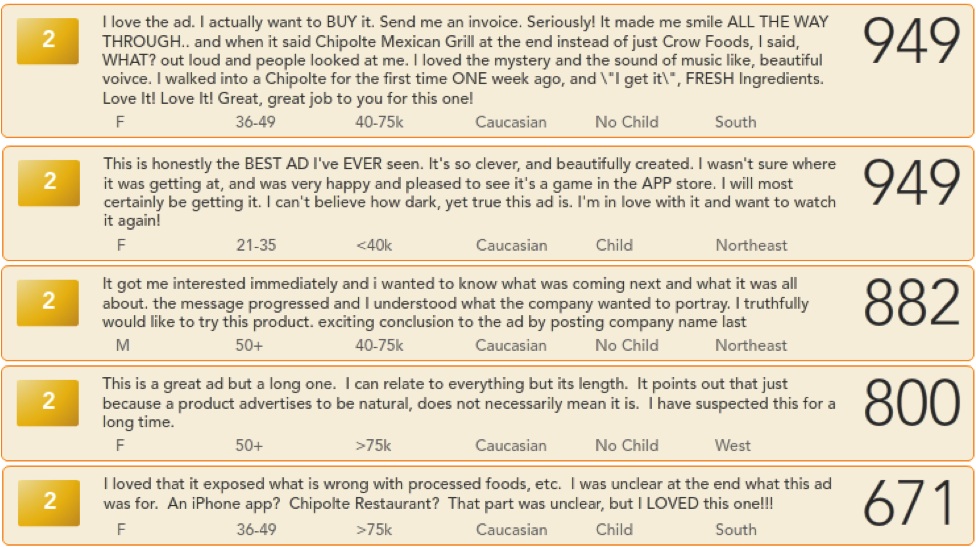 While the feedback – speaks to the score, the word cloud tells us some additional things worth noting.  First off, Chipotle does not come through very well.  Granted, its hard to spell – but only 6% of the 232 verbatim respondents called them out by name (more than 500 scored this and every ad we have).  When they did – the scores were even higher – 736 for that crowd.  The other thing to note is that a subset of the audience still found the ad confusing (6%) while a full 25% called out its length as a detriment.  Finally, it will be interesting to see how the app does in terms of downloads.  That did not come through in the ad with only 4% making reference to that aspect.

Congratulations to Chipotle for continuing to plow their own field – we love the work and look forward to more.