The shortlist is out for the Creative Effectiveness Lions at Cannes and it is an international affair.  The US has a third of the shortlist but the UK and Australia sport two apiece with the rest spread across Europe and New Zealand.  Latin America is conspicuously absent.

The list reflects the trend toward multiplatform, immersive engagements that we saw starting in last year’s shortlist.  Interestingly, there is one TEDx “Ads Worth Spreading” campaign (Prudential’s Day One Campaign) in the list and one repeat applicant (Small Business Saturday from American Express).

Naturally, we have scored the US campaigns that ran on television – which includes American Express, Prudential and Canon.  Google’s Re:Brief, while really cool, never ran on television and, as such, we don’t have any data on the campaign.

The campaigns were, predictably, top in their respective categories.  Let’s take them one by one:

This campaign worked quite well for Canon in the somewhat lightly advertised camera category.

A second ad in the campaign fell just outside the top 10%, but was still a strong contribution.

The ads were broadly popular from an age and gender perspective and the qualitative, while light by our standards (verbatims are optional and the # of responses tells us something in and of itself) was very positive and frankly inspired: 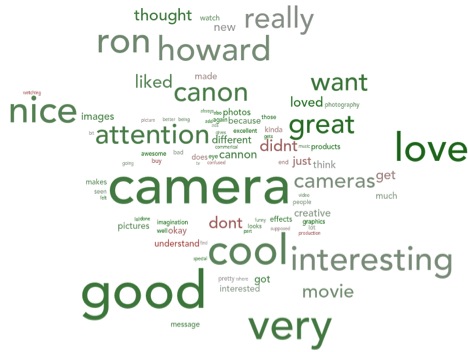 The next US ad is the American Express “Small Business Saturday” campaign.  It too is in the top 10% of all ads (actually closer to top 5%) and is the second highest ranking ad of all time in Credit Cards (MasterCard’s “Stand Up To Cancer” is tops).

Follow-up ads did well – but not quite at the level as the flagship ad.  Still the campaign does have one key feather in its cap that the other entries don’t – the US Congress officially recognized the Saturday after Thanksgiving as “Small Business Saturday.” 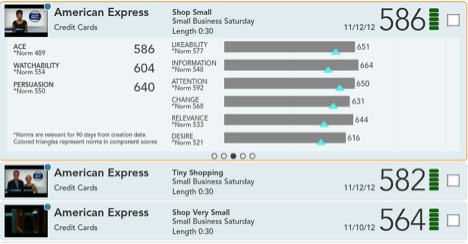 Verbatims spoke to the power of the message with support emanating from every corner of the age/gender and gender/income world: 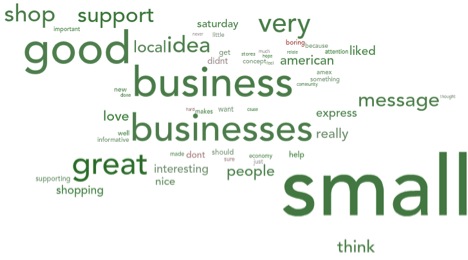 The last US campaign that we have data on was also a TED Ad Worth Spreading in 2012.  Prudential has a an entire campaign of “films” about peoples first day of retirement as the baby boomers leave the workplace.

Viewers clearly connected with the campaign but did so in a variety of ways.  As intended, the deeply personal stories captured the viewers’ attention, and in particular, the attention of those over fifty years of age. Here is a small sample of the dozen or so vignettes we have captured.

Outside of the quantitative results, we found that viewers connected with the emotional message – although it was too stark for some as evidenced by the a portion of the audience who felt the advertisements were “depressing.”  Below is the word cloud for one of the TED ads – “Moving On – Linda Guthrie.” In our word clouds, we color code the responses to align with the average score of the responses that used them.  In this case, the dark red color indicates that those who found the ad “depressing” scored the ad quite low.  Conversely, we find that those that found the ad “sad” still scored it highly as evidenced by its green color. 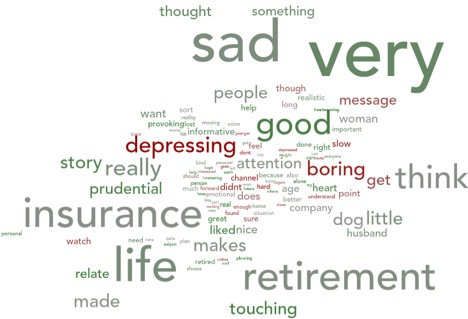 Click here to watch this ad and the other shortlist winners.