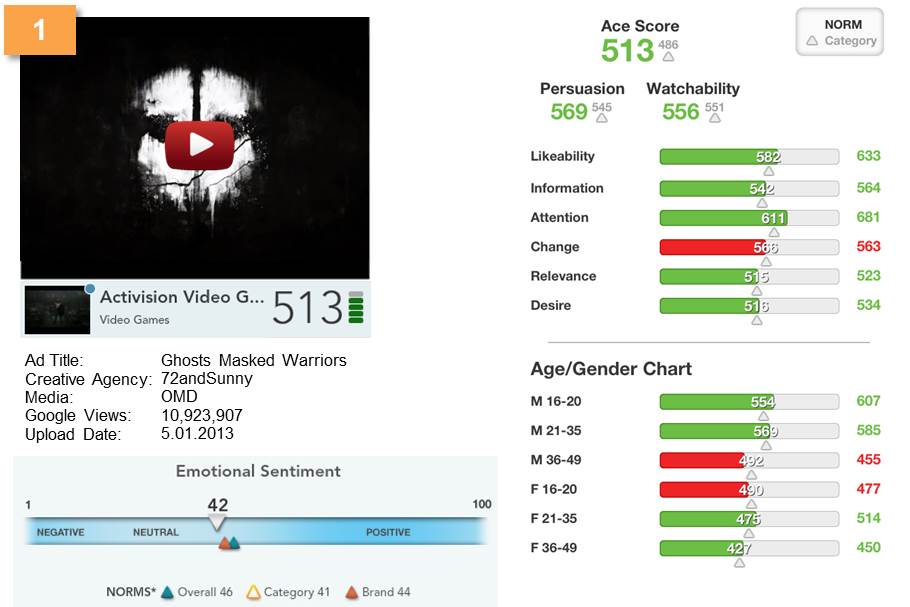 May was a big month for gaming with the Electronic Entertainment Expo (E3) and the unveiling of many games and new gaming hardware. This ad was above norm for Attention and Likeability but struggled with Change. This could be a function of where we are in the console release cycle. It came in 5% above norm for the Video Games – Mature category and resonated with younger Males 16-20. 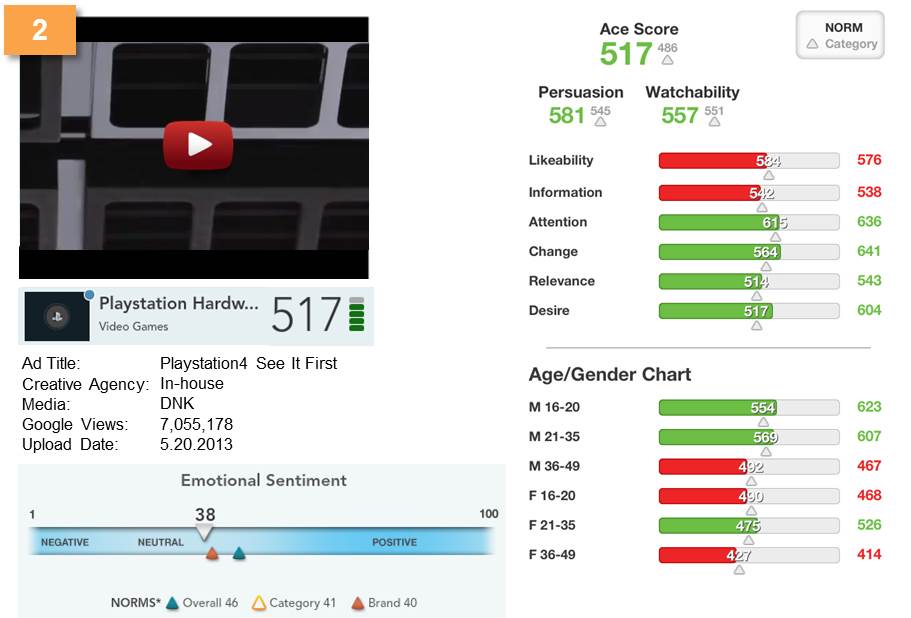 With all of the chatter surrounding the announcement of the new PS4, this ad scored high in Attention and Change with Males 16-35. Unlike the previous ad, this piece of creative over indexes on Change, which suggests strong interest in the launch. 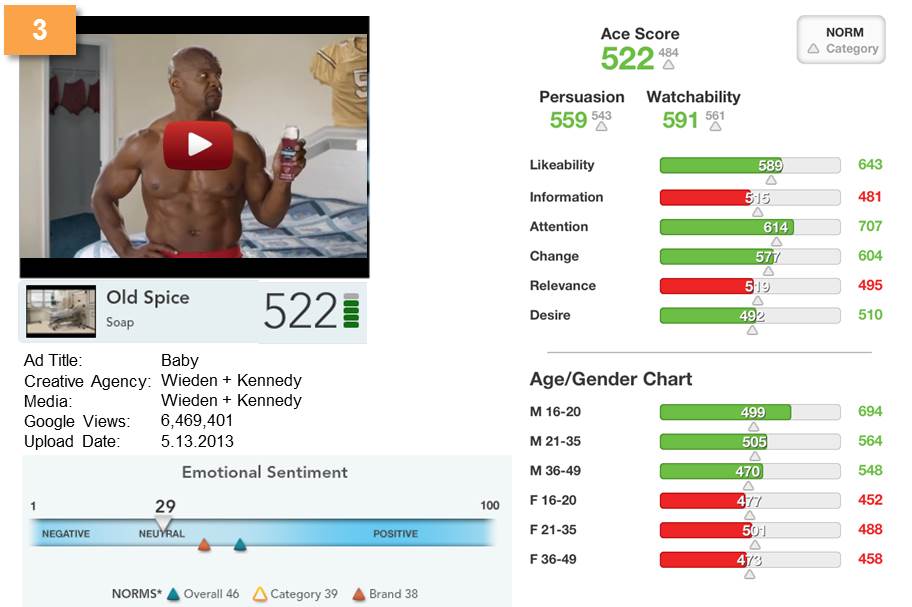 Old Spice is a veteran to the YouTube Leaderboard list with their ads targeting younger males. This particular ad was above norm in Attention and Likeability and skewed Males 16-20 but still performed above norm for all males. 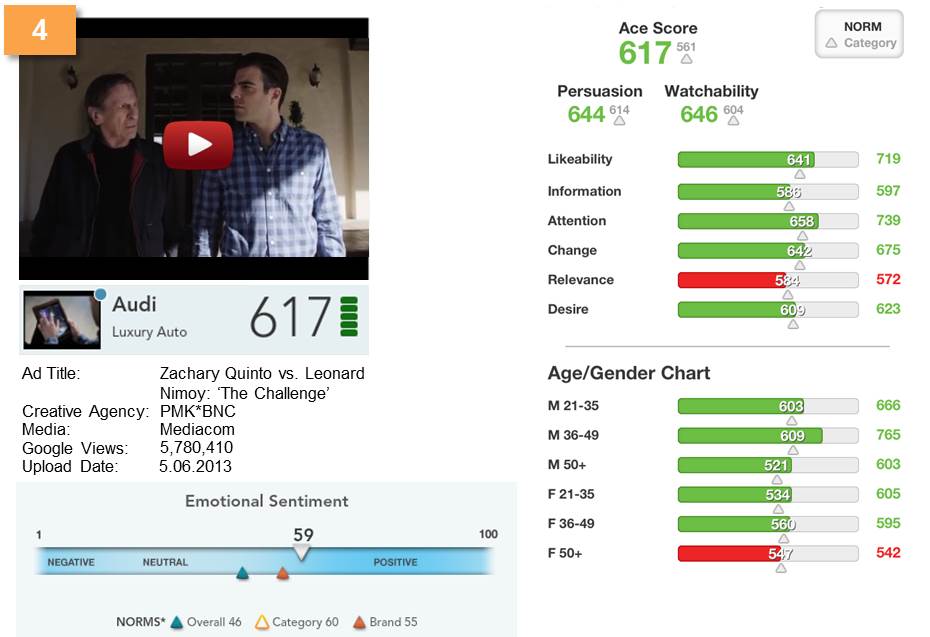 Longer ads tend to bring down scores but this nearly three minute ad overcame the odds. It scored very high in terms of Attention and Likeability but was slightly weighed down by Relevance. Males 36-49 liked the ad most, giving it an average Ace Score more than 200 points above the Lux Auto norm. The ad also touts a higher than average Emotional Sentiment score for the brand and overall. 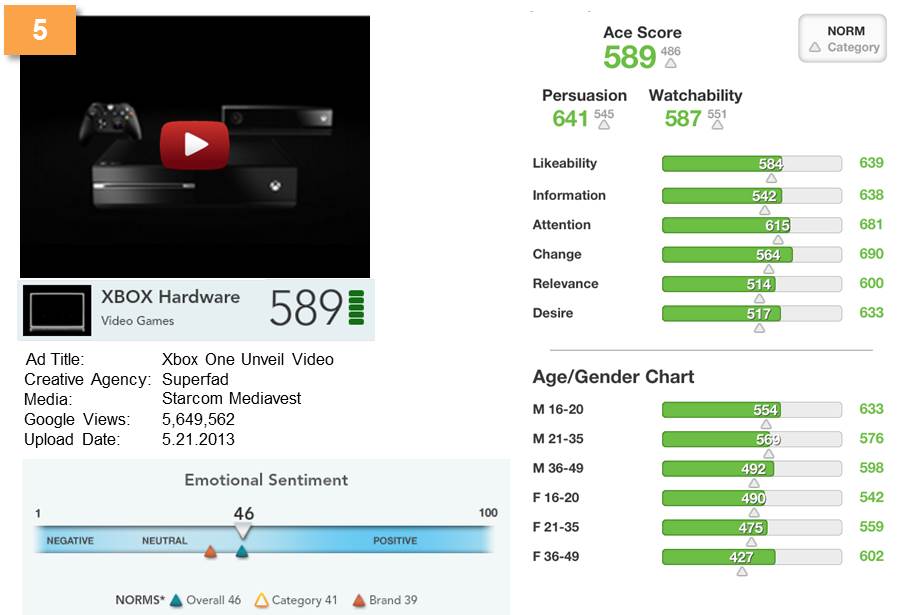 Unlike the other gaming ads that appeared higher on the most viewed list, this ad for the Xbox One scored above norm with all component scores and age/gender breaks. It also came in 100 points over the Video Games – Hardware category norm. Like the Sony PS4 ad above, we think the performance of these spots predicts a huge second half of 2013 for gaming. 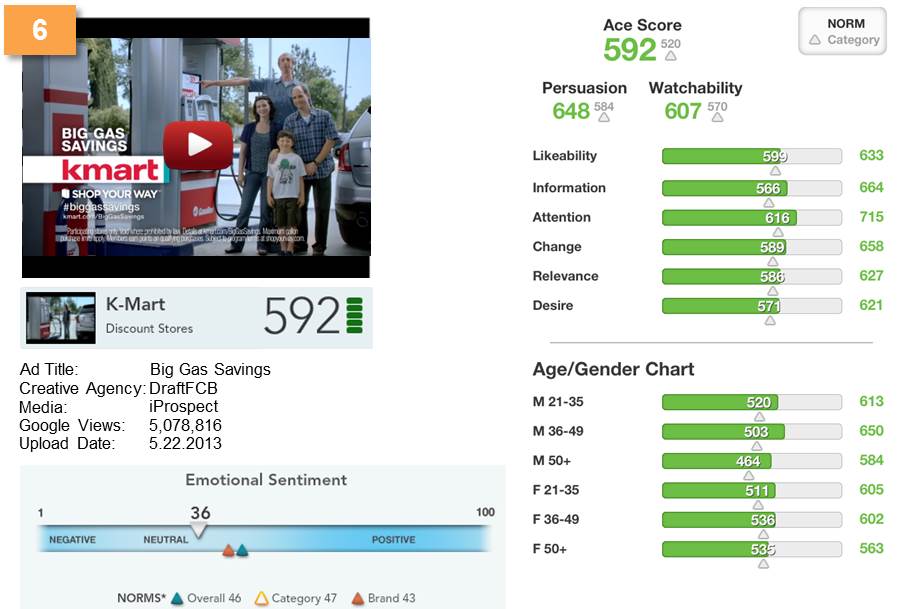 Like its predecessor, “Ship My Pants,” this ad stirred up a bit of controversy but still scored well with consumers. Above norm across the board in terms of component scores (Attention) as well as gender age breaks (Males 36-49). 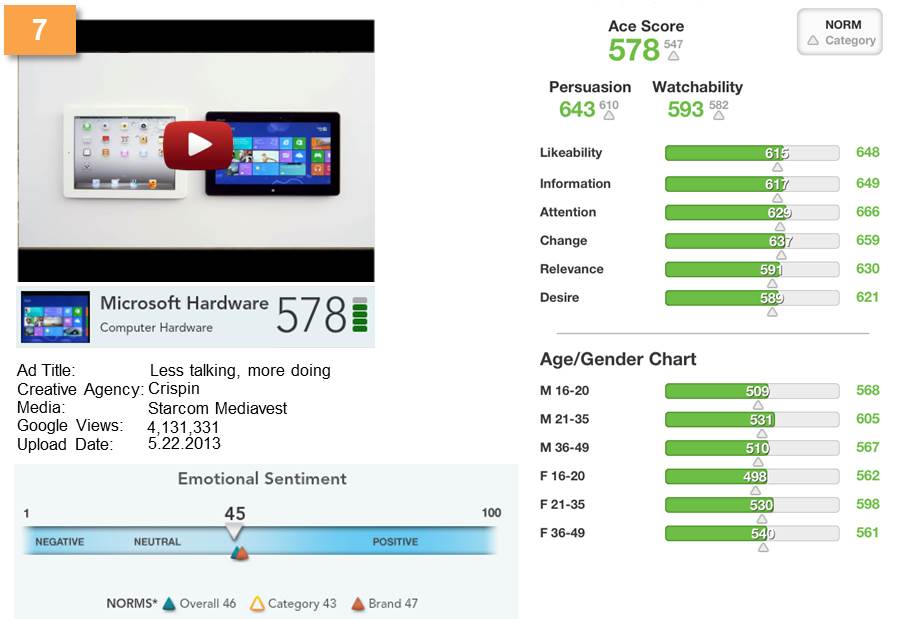 The battle between Microsoft, Apple and Samsung wages on, this time Microsoft takes on the big Apple. This ad scored upper quintile and broke every norm. Read our blog post on the “Three Way Race for Mobile Attention,” click here. 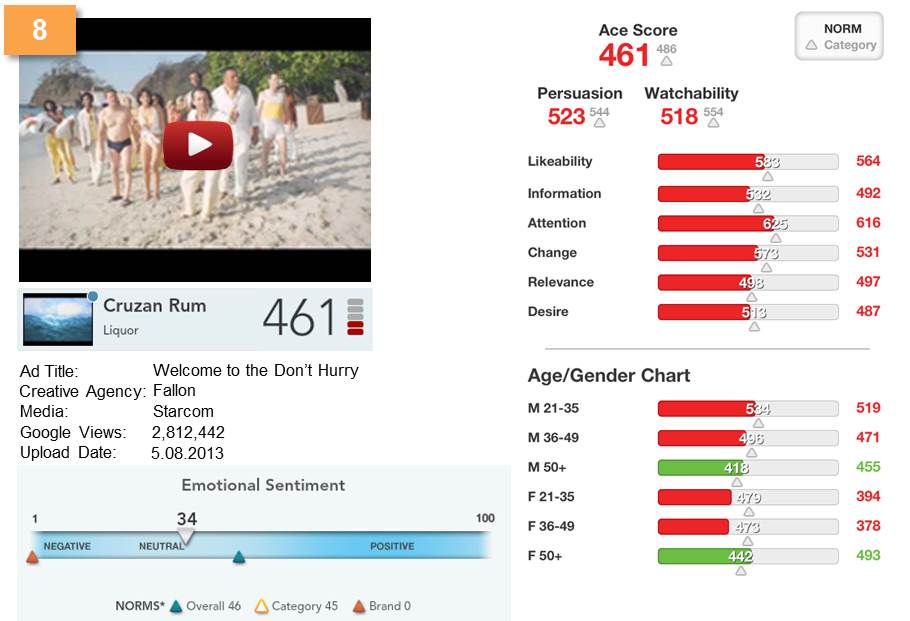 Similar to last month’s Sauza Tequila, this Cruzan Rum spot scored well with the older crowd, both Males and Females 50+. On an overall basis however, the ad struggled to hit norm from the Persuasion and Watchability angles. This is a perfect example of understanding your creative deeply. Knowing the strength with older audiences allows for better media planning both online and on television. 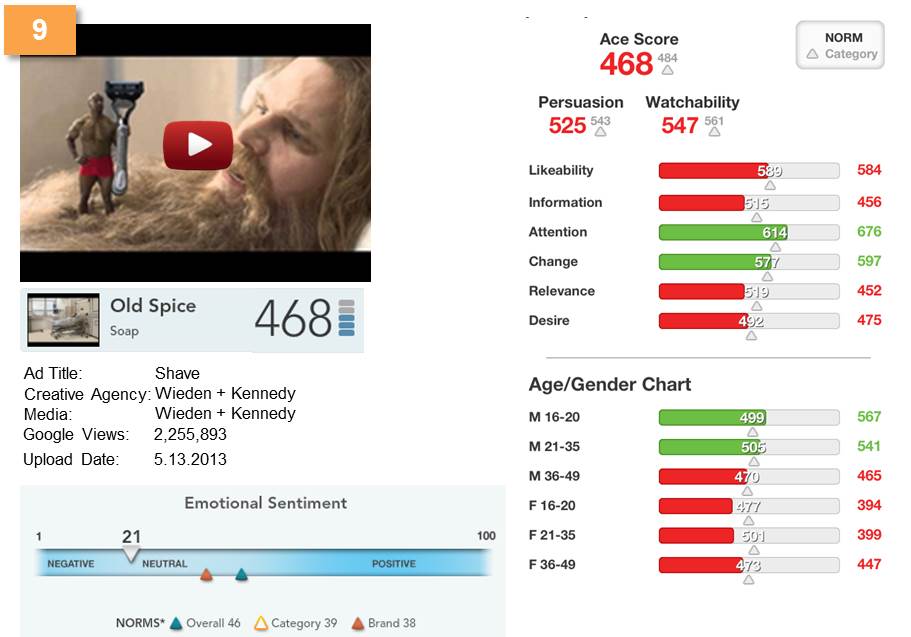 Terry Crews strikes again. Though the ad scored below norm on the Emotional Sentiment index, the ad did well in terms of Attention and Change for the veteran brand, and again resonated most with the younger males. 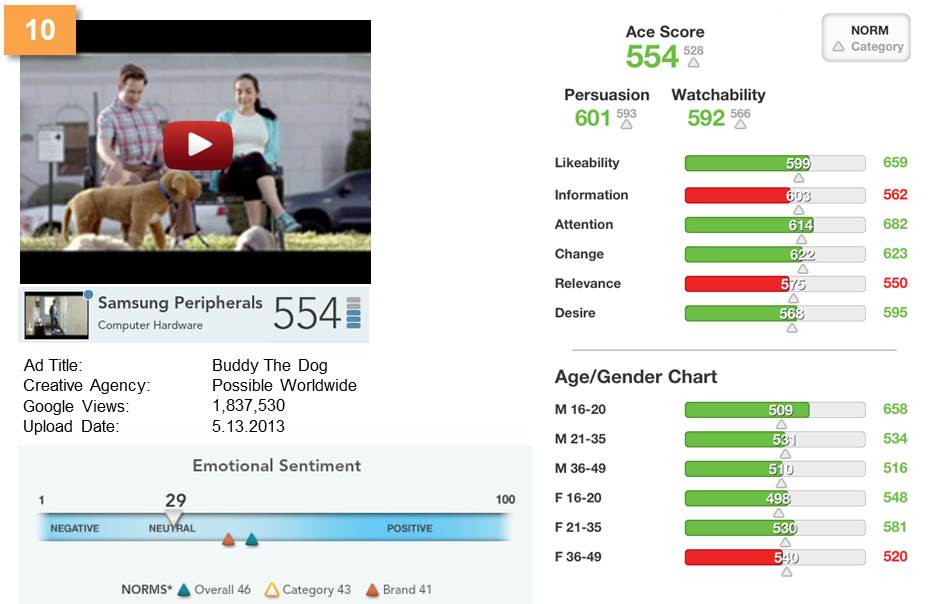 This ad was liked across the board minus Females 36-49. Males 16-20 led the pack scoring the ad almost 20% above norm for the category.