At the end of May, Cheerios aired what turned into a very controversial ad because of the interracial couple featured in the spot. Though the ad was made with the tried and true Cheerios ad recipe, simple and touching, viewers on YouTube couldn’t help but stir up a frenzy. While this ad, “Good For Your Heart,” struggled online, it scored high (10% above category norm) with the 500+ consumers who took our survey.  As part of the same campaign, the popular cereal brand has recently released another, less contentious ad, “Little Boy and Mother Eating Breakfast.”

Ace Metrix LIVE subscribers, watch the ad and see all of the scores here.

Just as a Cheerios ad is known to do, this 30 second spot tugs at the heartstrings and still earned a strong Emotional Sentiment score of 50 but is considerably lower than the brand’s Emotional norm of 58. The previous 30  second spot “Good For Your Heart” had a more positive Emotional Sentiment Index score of 61. Verbatim responses indicate this is likely due to the fact that “Little Boy and Mother Eating Breakfast” has a gloomier, more reflective tone as the son speaks about his grandmother. Despite this, the ad claims sky high Likeability, Attention and Relevance scores. Relevance, in particular, scored 16% higher than the 90-day category norm, which is good news for the brand that, according to Adweek, “[focuses] on simple, relatable family moments.”

This time, every gender/age break came in above the Cereal category norm, even the older men who typically give lower scores to cereal ads. Females 36-49 scored the ad 22% above norm followed closely by Females 21-35.

Out of 226 optional verbatim responses, 17% of viewers used the word “cheerios” in a primarily positive way. “Touching,” “love,” and “sweet” were also used frequently as seen in the very green word cloud below. 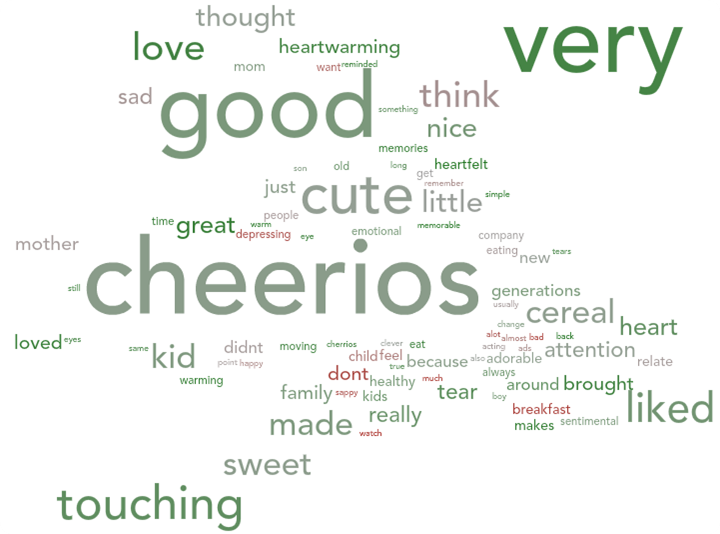 Respondents could easily relate to the ad and felt an emotional pull from the message behind it.

After the biracial controversy, this ad subtle reminder that the brand is and always has been about simple, everyday moments in which anyone can relate. For a more in depth look into the ad that caused drama, take a look at our previous blog post Two Cheers for Cheerios.

Ad of the Week: Reebok’s “Be Ready”