The Emmy’s Nominees have been announced for the upcoming show in September and was posted via Adweek last week. Four ads have been nominated for Outstanding Commercial from brand juggernauts Canon, Nike, Google and Grey Poupon. Previous winners include Procter & Gamble’s Olympic ad “Best Job,” Chrysler’s “Born of Fire” and Old Spice’s “The Man Your Man Could Smell Like.” This prestigious award holds value for the production company and advertising agency, as well as the brand itself. This year, four outstanding ads vie for the Emmy and here at Ace Metrix, we have them all scored.

This top quintile ad scored 15% above the 90-day category norm for Cameras and had through the roof scores for Relevance, Likeability and Desire. Females 21-35 scored it well above norm as well as the other gender/age groups, almost 150 points above the average. The ad captured viewers’ attention and had people using words like “love” and “want” throughout the optional verbatim comments.

“Jogger” aired during the 2012 Summer Olympics and was a huge hit. Coming in at 15% above the norm for Apparel & Footwear, the ad was inspirational and heartwarming. Relevance was the highest component score and came in more than 100 points above the 90-day norm. The ad resonated most with Males 16-20 who scored it nearly 30% above the category norm of 448.  Still the ad and its message was somewhat polarizing, as some viewers struggled with the length and pacing of the ad as noted by the 13% of verbatim respondents who commented specifically on those subjects: 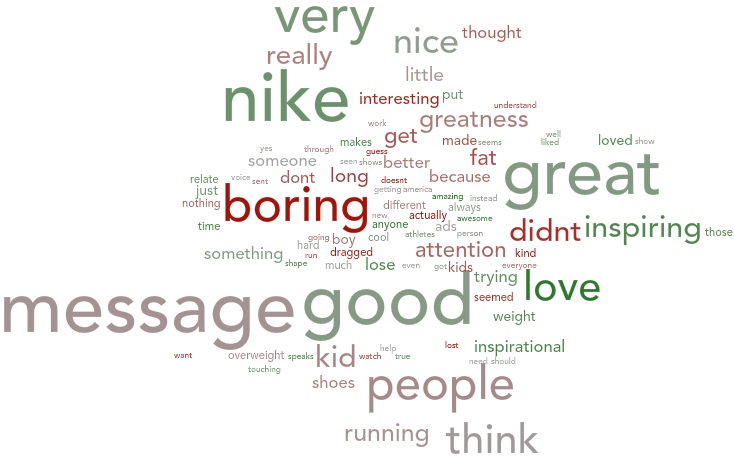 The highest scoring ad from the Emmy 2013 Outstanding Commercial list, this spot boasts phenomenal component scores – Likeability, Attention and Change all over 700. Not only is this ad almost 200 points above the category norm for Websites, but every single gender/age break scored it at least 35% higher than the norm. Females 36-49 gave it an overall score that was an incredible 57% above norm, something we don’t often see. Eighteen percent of the verbatim respondents mentioned the word “google” and even 13% used the product name “chrome.”

Grey Poupon made a much talked about return to the TV screen with this ad and their famous “Pardon Me…” line. The ad came in lower quintile for Staples, a category that typically sees stronger Relevance and Desire scores. While viewers were captivated by “the Chase”, as evidenced by the 700+ score for Attention, the ad struggled to deliver on key Persuasion components – the biggest gap being Information, a full 99 points below norm. If the Emmy judges are merely grading on Likeability and Attention  this ad does well, achieving scores 11% above norm for these two components. Males 21-35 connected most with the ad and 16% of viewers used the word “funny” in their responses. Those who used “don’t” generally liked the ad but don’t like Grey Poupon….

We’ll be interested to see who prevails as the winner on September 22, not to mention what new ads will break during the awards.