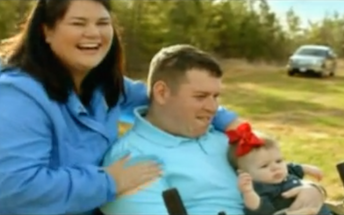 Ford earns the highest scoring ad of the week with an inspiring salute to injured veterans while Cabela’s outperforms the 12-month norm for the Retail Store – Other category with a message that encourages consumers to appreciate the outdoors.

Ford’s “Healing” tells the story of a program called the Independence Fund, which provides services to injured veterans, in this ad providing veterans with all-terrain vehicles that can be used to enjoy the outdoors.

While strong in different areas, “Healing” primarily drew its strength from conveyance of new information and being likeable, dimensions in which it scored 28% and 21% above the non-luxury auto category, respectively. When asked what the single best thing about the ad was, a resounding 36% of respondents stated that it was the message. 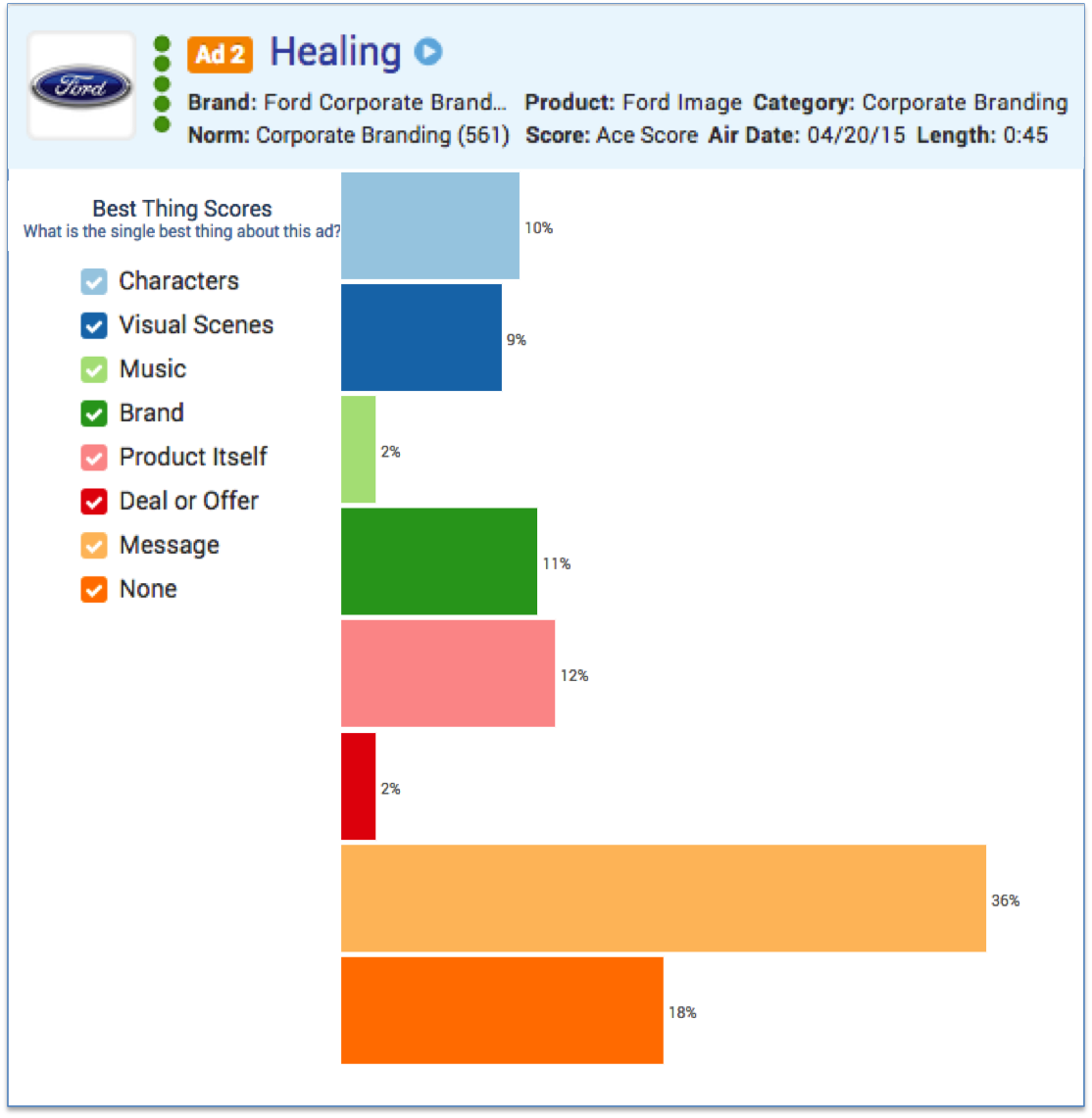 Consumer verbatims help to understand what it was about the message that they found to be so informative and likeable, which was how it built awareness of the Independence Fund and garnered sincere admiration. 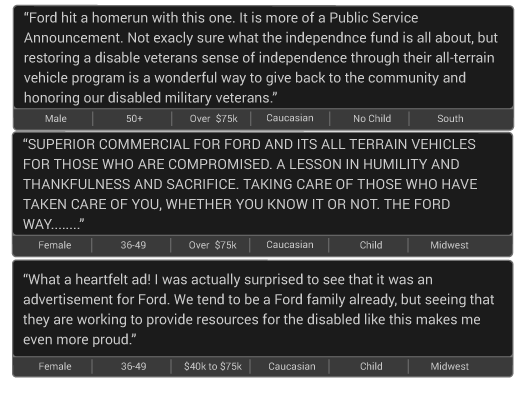 Cabela’s “Real World” also broached the subject of the outdoors, this time simply encouraging consumers to disconnect from technology and to get outside, using a montage of beautiful outdoor scenery with a cover of “What a Wonderful World” playing in the background.

Similar to Ford, “Real World” drew strength from being likeable (19% above category norm), but instead of informative, this ad was highly relevant (25% above norm). In this case, consumers were split on what they felt to be the best thing about the ad, between the message and its visual scenes. 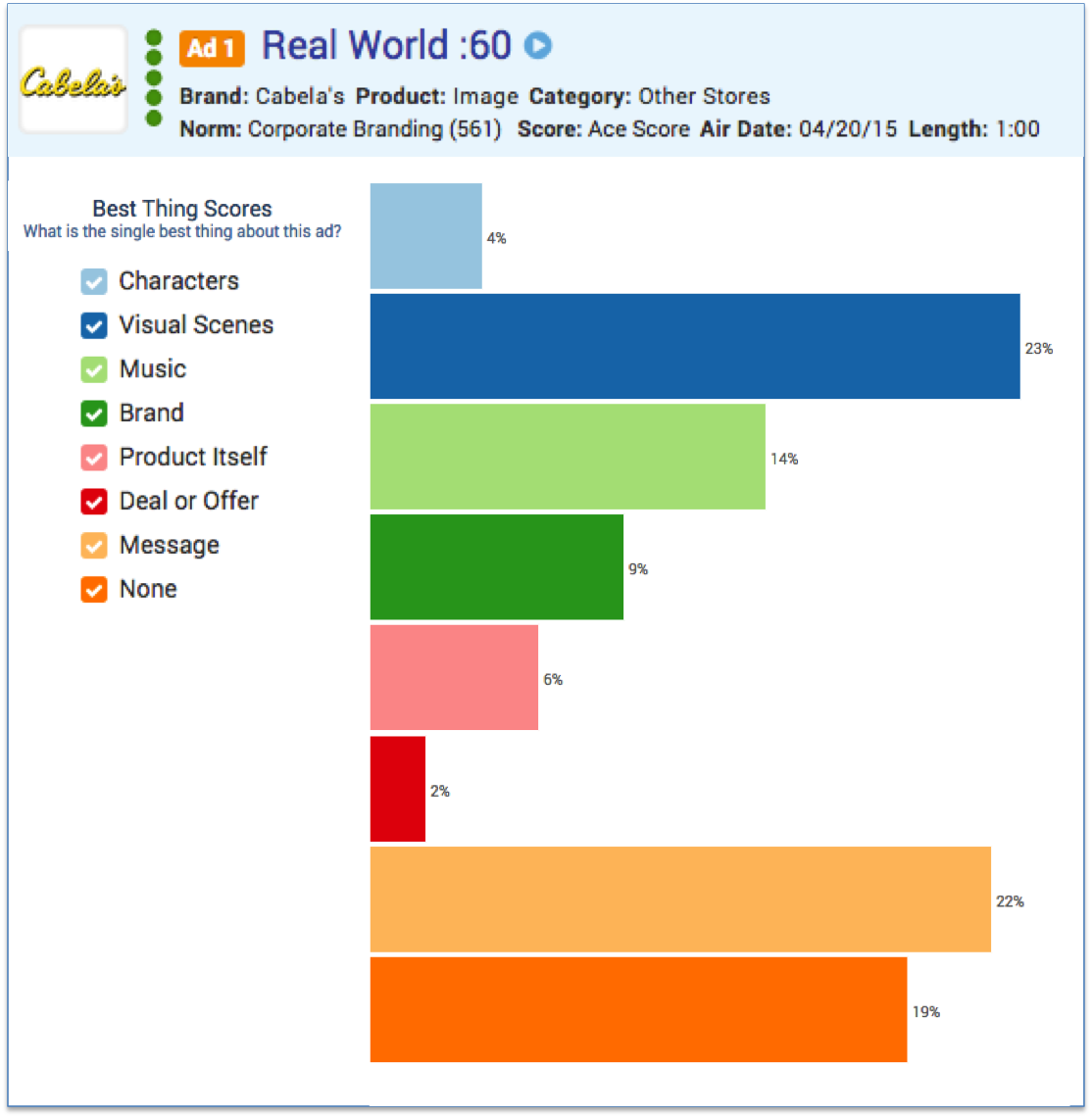 While it is fairly obvious that the visual scenes refer to the beautiful outdoor imagery, the message that consumers picked up on was the need to get away from technology, often mentioning that kids spend far too little time outside. 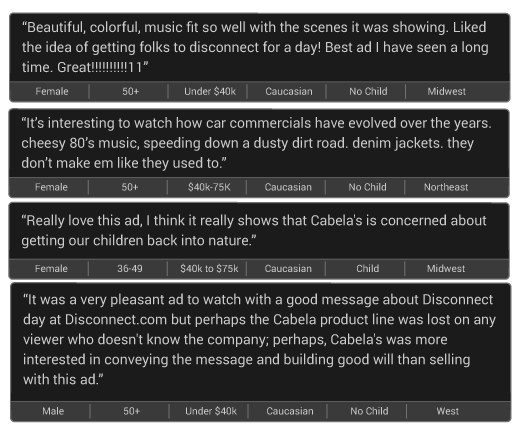 As mentioned in the last verbatim response, some consumers had difficulty identifying that Cabela’s was the advertiser; creative tweaks to enhance brand communication could make this an even more powerful ad.
Watch this year’s winning Ads of the Week by Category Overachievers.