Much like the nominations themselves, there was quite a bit of diversity among the ads that aired for the first time during the Oscars this past weekend; but what were the ads’ one common intention? Capture the eyes of a female rich audience. Of the 43 million viewers that tuned in to the largest non-sports TV event of the year, more than 60% were women, and those women are fairly affluent.

Technology players Google and Samsung used the platform to demonstrate their wares and celebrate the creativity within all of us. JCPenney introduced six new ads during the night, each slightly skewing toward a different group, but each of them spoke directly to the woman of the house.

Our scores are reflective of the general population – meaning every ad was scored by its more than 500 Americans (about 19,000 consumers interactions) balanced to the U.S. Census for age, gender and income. Here we will take a look at the ads that broke 600 and see how the advertisers did in terms of leveraging this stage and its audience.

Advertisers were able to connect with the Oscars audience, which traditionally tilts towards higher income females, with ads that scored some 54 points above the average for this target demographic. But the top performing ads had a few other things in common:

Samsung dominated the Oscars in terms of ad time (not including the historic selfie), running a full four and a half minutes of new creative featuring its hardware devices and televisions. The long form ad “Incredible” earned the highest Ace Score for new creative of the night. The ad showed off product features across a variety of devices and through the lenses of children, teens and adults, as well as families, friends and professionals, adeptly positioning the brand as having developed technologies that apply to everyone. 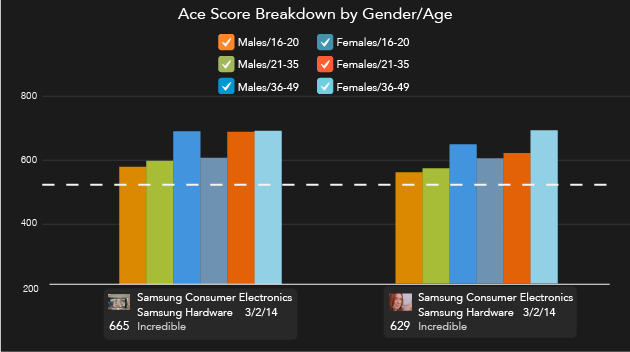 Both the :90 and :30 versions skewed mature female but also earned well above average scores from men. And while 8% found the number one ad of the night “long”, both ads drew strong positive verbatim responses, of which 16% used the word “products” and 16% mentioned “Samsung” by name.

Lipton’s “Be More Tea” campaign has Kermit the Frog sharing his sunny disposition among a city filled with Animals. Lipton introduced a :90 version of their Oscar spot just before the weekend and has since been running :30 versions – all breaking 600 and scoring well with men and women of all ages. The Muppets have been busy promoting their upcoming movie, having recently partnered with Toyota for their top scoring Super Bowl ad. Thirteen percent of survey respondents remarked that they “loved” the Muppets, the commercial and Lipton Tea. 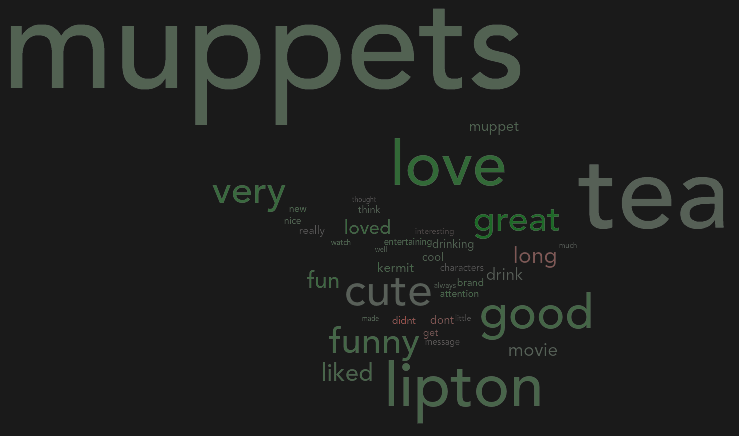 Google grabbed two of the highest scores of the evening with its ode to creativity – one “Tonight”, a tribute to the movies and their makers (featuring Google Play) and the second, “We’re All Storytellers”, a tribute to the potential movie-maker in all of us (featuring Google search). Both ads scored more than 16% above the Technology category norm, appealing most broadly of any advertiser and capturing both men and women of all ages.

All component scores were well above norm for both ads, but what’s particularly interesting are the Relevance and Desire scores. “Tonight” scored an unsurprisingly high Relevance score of 634 but “We’re All Storytellers” drew even higher Relevance scores at 666, nearly 20% above the norm.

And while “Tonight” achieved nearly even scores across age/income breaks, “We’re All Storytellers” skewed higher income and more significantly with respect to males. 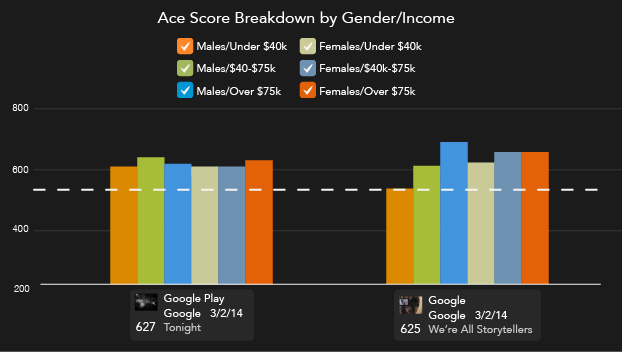 Pepsi debuted a tribute to Hollywood’s most memorable one-liners, featuring a cameo from Cuba Gooding Jr., to introduce a new mini can clearly targeting women. The ad certainly skews mature female and skews lower income, with women earning less than $40K per year awarding it the highest score of 660. 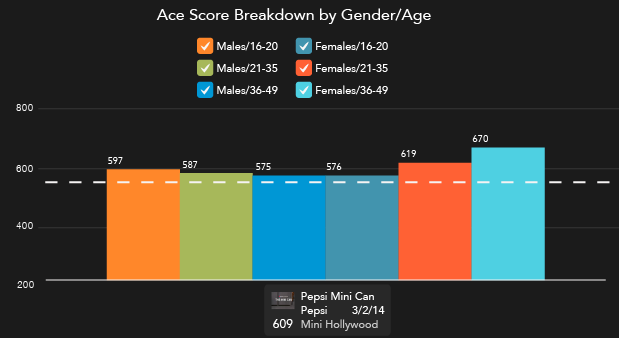 Pepsi’s “Mini Hollywood” earned the highest Attention score of the Oscar nominees (724) by 27 points and outperformed the overall Soda category norm by 11%.

Not everyone went home with an ad Oscar, but there were some other notable performances.

American Express debuted two ads from a new campaign featuring Tina Fey and the Everyday Credit Card and promotion. The stronger of the two ads, “An Eventful Day”, skewed younger female with strong Attention, Likeability, Information and Change scores – while the second one, “Dryer Sheet Inspiration”, suffered a bit on Attention and Likeability amidst confusion about whether the ad was for American Express or dryer sheets. 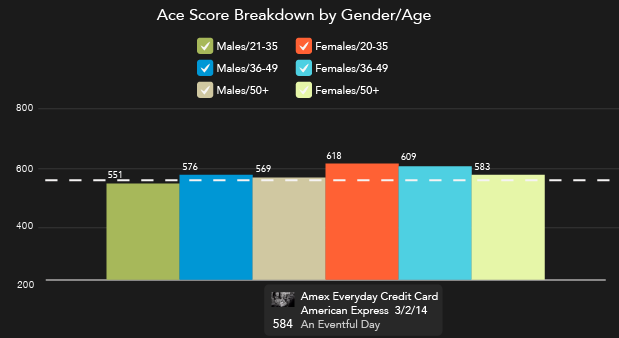 As we’ve noted so many times before, celebrities, in general, can be polarizing and the verbatims for these two ads demonstrate that point simply. Tina Fey was mentioned specifically by 15% of the 680 verbatims collected for the two ads – (men 13%, women 16%). And while 13% of women used the word “funny” to describe the two ads, only 7% of men did.

There were several other brands to introduce new ads during the star studded affair and at $1.6 million per :30, they are due their ink. If you are interested in how particular brands such as JC Penney, McDonalds or Chevrolet fared, don’t hesitate to reach out to me at creativerules@acemetrix.com.

Cover Girls Can and TGI Friday’s Burgers Definitely Can