We are delighted to announce the availability of the 2014 BLACKBOOK. For those of you in the know, this is the second installment of the BLACKBOOK, which is widely considered to be the definitive guide to television creative effectiveness. Used by brands, creative agencies, media planners and press, the BLACKBOOK is more than just a ranking of 33 categories, 1,400 brands, based on 12,000 ads,1.2 million consumer opinions, and 3.5 million verbatim comments – it is a book of stories.

Your story is in the BLACKBOOK. That story may have exceeded your expectations,  it may disappoint, but it is here. It doesn’t matter if you worked on one ad or one hundred (a rare group that includes Procter & Gamble and Walmart), your story was written and consumers took careful note, evaluating that story from over a dozen different vantage points creating the Ace Score for each ad. Ads may stand alone or roll together to make campaigns. In many cases, multiple campaigns roll together to tell the story of brand performance in 2013.

What makes the BLACKBOOK so interesting, however, is not the ability to look at your story but to see every story written. The Coca-Cola story, the Google story, the Bisquick story, the Chipotle story, the MiO story. No matter how big or small the brand, the stories are there.

The BLACKBOOK also covers the trends – woven together from the individual brand narratives. 2013 was an interesting year from a television advertising perspective. It was a year in which Casual Dining took the crown from Appliances as the highest scoring category. It was a year that saw video game consoles and game makers rebound from a disastrous 2012. It was a year that saw several major brands lose its footing, and its performance in the BLACKBOOK should serve as a wakeup call that resting on the laurels of previous success is a dangerous game in the new economy.

We are excited to share this unique, cross-category view and deep category review of the year in advertising. We will be publishing stories for each of the categories over time, and the first on our editorial calendar is Technology – Software and Websites.

To get a taste of the data presented in the BLACKBOOK and to request your copy, online credentials or a presentation of the data by one of our experts, click here.

But without further adieu, let’s breakdown a category. We choose Software and Websites because it delivered the Brand of the Year in 2013, Google. Each category has similar insights. 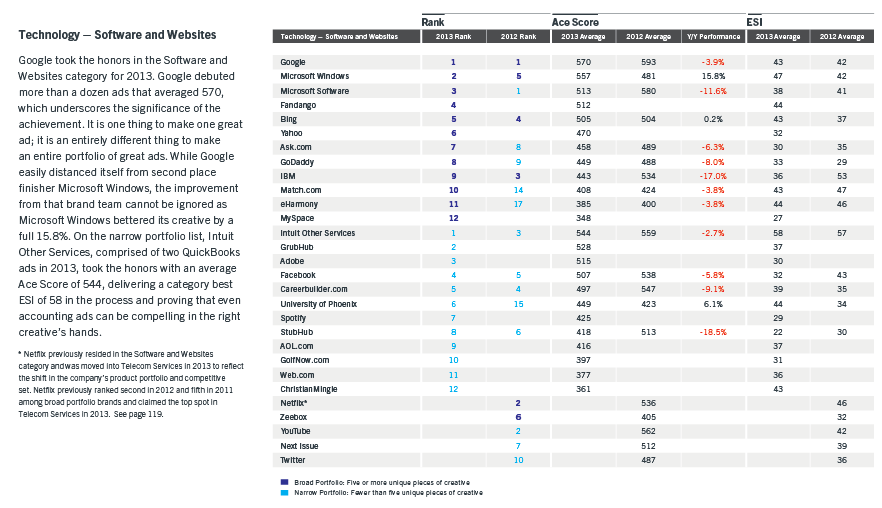 While our narrative pulls out the important points it’s worth asking a few more questions. Like, what is ailing Big Blue? IBM’s advertising performance is off a startling 17%. Further, look at its Emotional Sentiment scores; they cratered. We actually know the answer to IBM’s fall (ssshhhh, contact us and we will tell you…). Another question surrounds the Facebook and Google rivalry. It took Google a few years to find its sea legs as a television advertiser, but they sure did. Is 2014 the year that Facebook finds its voice? Finally, why such creative disparity amongst the Microsoft brands?

Again, this is but a few pages on a single category. While we defied convention by actually producing a book, we did the digital thing too creating an online version. Why, we would be happy to grant you access (request credentials). We would like it even more if you were to ask us to present to your company or agency. We can do that in person or over webex. It takes about an hour (better yet, 90 mins) but covers everything from the categories that interest you to the trends and angles that make up advertising – from category bias to celebrity, humor, ad length, polarity  and what three different steak shots can do in 15 seconds that Bob Dylan can’t do in 2 minutes.

High Scoring Oscar Ads are the Top Ads of the Week