How Brands Are Serving Their Plant-Based “Meat” Ads

Whether you’re a full-time vegan, flexitarian, or at the very least tempted to take part in a Meatless Monday, chances are you’ve seen ads promoting the burgeoning alternative protein and faux dairy categories. Impossible Foods and Beyond Meat have become increasingly ubiquitous household names in 2020 — thanks in part to the lack of options on grocery store shelves at the start of the pandemic.

Plant-based alternatives are a relatively new consumer trend on the rise. This novelty makes it no surprise that brands are continuously working to improve their messaging. Early communication has mainly positioned faux meat against the real thing (often in the form of “blind” taste tests from QSR brands) in an attempt to sway carnivores. However, Lightlife recently started beef with its alternative-meat rivals, displaying the first signs of competition amongst brands in the category.

With World Vegan Month (November) in full swing, and brands like Pizza Hut and McDonald’s recently announcing their first advancements into the nascent space, we thought there’s no better time to analyze ads from plant-based meat alternative brands and their QSR partnerships:

How Plant-Based Meat Messaging Is Faring

A recent study revealed that  97% of consumers that have tried plant-based meat substitutes for the first time during the Covid-19 era intend to purchase again. Among the top reasons cited by consumers for buying such products are factors of health, safety, and convenience.

Marketing efforts are contributing to these perceptions. Of the 37 ads we analyzed, 65% scored on our Healthy metric, which indicates viewers are connecting with this product attribute in a given ad. Those scores are largely driven by the packaged food brands themselves (Beyond Meat, Impossible Foods, Morning Star) where 90% of the ads connected with consumers over health benefits. The reaction wasn’t very common among the QSR ads.

Meatless packaged food advertisers are using an array of messaging tactics in their ads, with some focusing on informing about the product with in-depth details on how the faux meat is made. Others are taking the route that seeks to entertain. One ad that successfully intertwined both tactics was Impossible Foods’ “The Making of the Impossible Burger”:

None of the plant-based ads in this analysis fired on the Green emotion, which, if done properly, would have indicated that viewers notably caught on to environmentally-friendly messaging. “The Making of the Impossible Burger” did, however, evoke a variety of emotions in viewers, including the Healthy emotion and a sense of Curiosity, the former being a common (and desirable) attribute for these types of ads:

Where things begin to get iffy is when it gets to the But emotion, one of the strongest reactions that came forth in plant-based meat ads, as 32% of the spots evoked this metric. The But emotion measures internal conflict among viewers and can be sparked for a variety of reasons. Plant-based meat is not a universally accepted concept (yet), as it’s still in the early stages of its adoption cycle, especially in comparison to the meat industry that this rising star seeks to disrupt.

“The Making of the Impossible Burger” drove positive purchase intent among 61% of viewers, which was significantly stronger than the recent (real) meat category norm of 53%. This success was largely driven by the communication components, Information and Change — both of which scored above the 180-day packaged foods norm:

Interestingly, although “The Making of the Impossible Burger” was an Impossible Foods ad, 9% of viewers recognized “Burger King” as the brand advertised. This was likely brought on by their co-branded Impossible Whopper. After all, we’ve tested 9 ads from Burger King promoting the product since its launch in August 2019. That’s twice as many as any other advertiser included in our meatless ad analysis.

“What If We All Go Beyond” performed comparably to Impossible Foods “The Making of the Impossible Burger” in a shorter amount of time, but the effectiveness of the ad was cut down as well. Beyond Meat took a more entertaining approach, with the informative key points poised as “what if” questions as opposed to facts. This weakened its Information and Change component scores compared to the more authoritative stance Impossible Foods took in “The Making of the Impossible Burger” (seen in the chart below). This also resulted in lower purchase intent with only 49% of viewers showing positive consideration after watching “What If We All Go Beyond” versus Impossible Foods’ 61%:

Lightlife took a more entertaining and musical direction, with overtones having the semblance of a Disney Sing-Along in ad form. The :30 “Modern Family Meal” evoked a plethora of positive emotions without any negativity: 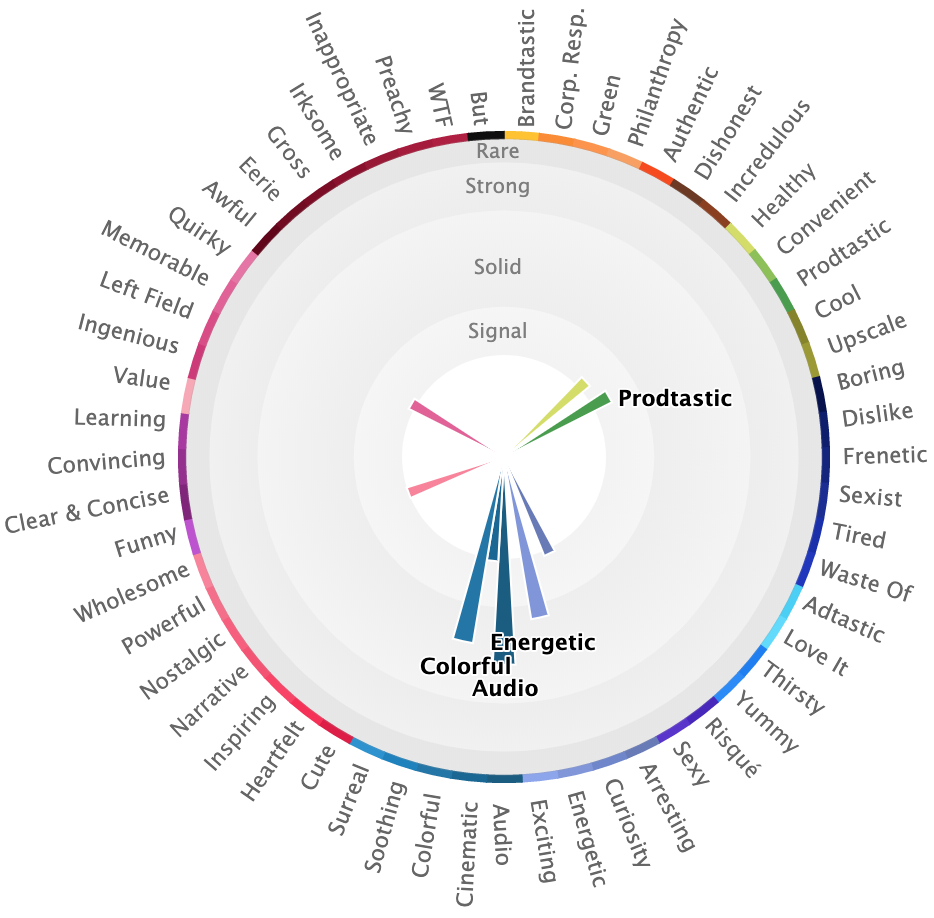 Although this ad shines a positive light on the brand and product, the jingle and visuals were not enough to convert an above-norm amount of viewers into plant-based enthusiasts, with 52% of the audience showing positive purchase intent.

Only three of the QSR ads with plant-based product promotions scored significantly above category-norms on our traditional component scores. Each featured real people trying out their products in a taste-test style. Making use of their brand power through the halo effect, QSR advertisers focused less on highlighting the product and more on social proof by showing real people (and Snoop Dogg) to get the message out there about their plant-based meat alternatives.

While plant-based meat alternative messaging was hot in late 2019 and early 2020, QSR advertisers changed their focus when the pandemic hit. Interestingly, the opposite applies to the faux meat brands themselves, as almost all of their ads have aired since the pandemic started.

Taste-test tactics didn’t necessarily translate to exceptional purchase intent for QSR plant-based promotions. Although the highest scoring ad of the lot, Burger King’s “The Impossible Taste Test,” beat out all other plant-based food ads on both component measures and purchase intent, it seems to be the anomaly. Along with “Great Surprise,” what Burger King does right is that it uses real people and casual dialogue to create a friendly link between brand, consumer, and product. The use of Humor also played a role in these spots, as 88% of plant-based QSR ads that were analyzed scored on our Funny emotional metric.

“The Impossible Taste Test” was able to create a palpable connection between viewers through the combination of social proof and humor, making it the second funniest spot in the set.

“The burger looks delicious. The ad was funny, I like these types of candid cam style ads. The cursing in the ad I think may be a detractor for some but for me it was great. Really brought it down to earth.” Male 21-35

“Laughed at the reactions of the consumers – especially the bleeped out cursing. I’ve read about the Impossible Burger before and was interested already; this ad absolutely made me want to try it.” Male 36-49

The taste-test ads also had a flip side with some viewers that gave rise to the Dishonest and Incredulous emotional metrics, indicating that this style of advertising can make viewers more skeptical and dissuaded than intended.

Information is playing a major role in viewer’s perceptions of alternative meat choices. In a space where some consumers lack the proper knowledge to be able to make purchase decisions based on curiosity alone, informing consumers becomes all the more important. There is room for advertisers to weave in environmental messaging as well. With Healthy being a commonplace reaction to the majority of these ads, it’s making it clearer to some viewers that plant-based meat is a better-for-you alternative to traditional meat.