Social and traditional media might have you believing that Republicans and Democrats are on polar opposite sides of everything from the issues they support to the brands they buy. It seemed they were mostly divided when it came to branded “Vote” messaging in ads, so we were curious whether this disunity played out in advertising in general.

At the beginning of September, we added a Political Party Affiliation question at the end of our surveys as we realized politics influences US consumers’ attitudes and beliefs. When asked “Which US Political Party are you affiliated with?” respondents choose from: Democratic; Republican; Libertarian; Independent; Other; Not registered/Do not vote; and Don’t Know.  In the last two months, we’ve gathered that data on over 1,500 non-political ads, which provides us normative data and some pretty interesting insights.

Now, we all know that there are HUGE partisan opinions for political ads, almost by design. We wanted to look deeper at overall beliefs and attitudes…was there ANY common ground? So we analyzed 1,000 non-political ads from the last 60 days ﹣ the 500 highest scoring from both Democrats and Republicans. We found that they agreed on ⅔ of their top ads. In other words, 331 out of 500 ads (66%) on each of their lists overlapped: 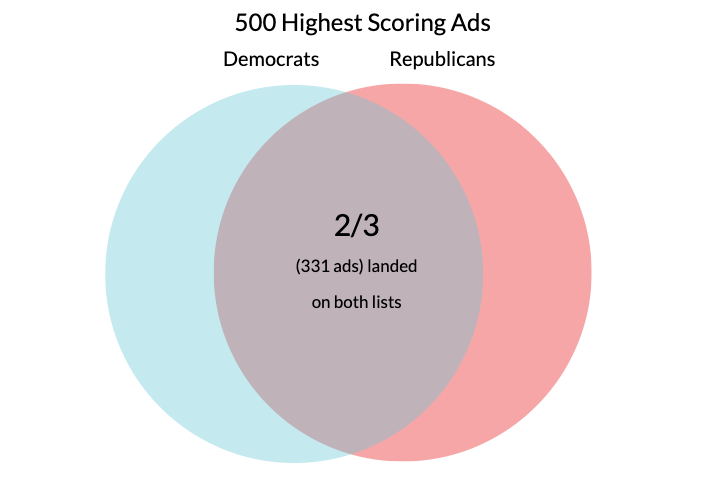 Politics aside, there’s a lot more commonality between the two parties than you might think. That’s great news for brands that worry they can’t win over one without losing the other.

Atypical Ads That Bridge the Gap

Most of the ads where Democrats and Republicans agree are benign in terms of social and political messaging and therefore don’t divide. Of the more purpose-driven themes in advertising, COVID-19 and supporting small businesses united both sides.

That said, there were also a number of ads we’d consider anomalies, ones that broke the mold of stereotypical Democratic and Republican ideologies. One such ad is PetSmart’s “Make a Friend,” which is inclusive of people from different racial backgrounds, has an LGBTQ couple and subtly hints at immigration:

With the help of pets, it was recognized as Q3’s Top Breakthrough Ad. The message of acceptance resonated extremely well with both political parties. Compared to recent Retail industry norms, it overperformed by 35% among Democrats and 29% among Republicans. Both had very similar positive emotional responses like Adtastic (a general appreciation for an ad), Authentic, Heartfelt, Inspiring etc. Interestingly, when it came to Cultural Perception, right-leaning viewers found it slightly more Empowering than their left-leaning counterparts, and neither segment found it Exploitative.

Democrat, Female 21-35: “I like the diversity of people in the ad. Thank you for including a queer couple! It makes me, a whole entire queer person, feel seen! I’m also glad that you’re encouraging adoption. It’s nice to hear that from a big pet store chain.”

Democrat, Female 36-49: “I loved it! The animals were cute, the people were diverse, the message was strong and healthy.”

Republican, Female 50+: “Great ad and so true about animals not caring age, race, gender. They just want love. Adopting a pet is a wonderful thing to do. Thank you.”

Republican, Male 21-35: “You can appreciate how beautiful it is to live in unity.”

Republican, Female 50+: “I think it’s an excellent ad and it’s a very important message NO Judgement.”

Secret’s “Risk It All” touches on COVID-19, female empowerment and racial injustice. Two of those three topics are highly contentious in the social climate these days, so to generate above personal care industry norms for both Democrats (+31%) and Republicans (+13%) is impressive. Additionally, viewers from both segments were mostly on the same page with one another. Polarity Scores were way below norms for both, with 68% of Democrats scoring “Risk It All” within the highest range of scores possible as did 67% of Republicans:

Even more telling of their unity was the fact that there were very few ads where the parties disagreed. When we compared the 500 highest scoring ads from Democrats to the 500 lowest according to Republicans, we found that only 6% (32 ads) were the same. For the vice versa, only 4% (22 ads) of the ads Republican scored best were scored poorly by Democrats:

While Democrats and Republicans are generally agreeable when it comes to (non-political) ads, we uncovered the following divisive themes from the few ads where they disagreed. As it turns out, overtly political messaging is really the only area where their assessments contrasted each other:

Vote ﹣ We identified “Vote” messaging as polarizing in our analysis of election-themed ads. It’s the most common dividing theme; with 7 of the 32 ads Democrats scored above industry norms and Republicans below promoting voter turnout. Most of which were non-partisan in their pleas for people to get out and vote, but that didn’t stop it from dividing.

On top of traditional metrics, the polarization of “Vote” messaging is evident in emotional responses. All seven ads elicited positive emotions from Democrats, like Adtastic and Authentic. These ads also gave Democrats an impression that the company truly cares about the matter, which registered signal on Corporate Responsibility:

Meanwhile, none of those emotions were evoked by Republicans. Instead, this segment mainly found the 7 “Vote” ads they disagreed on Inappropriate, Dishonest and/or Incredulous:

There were a couple “Vote” messaging ads that resonated really well with both political parties. However, it’s a tough topic to navigate if you’re going for unity. Out of 27 “Vote” ads tested in the last 60 days, Democrats scored 21 above norm while Republicans only scored 4. Additionally Republicans scored 11 “Vote” ads below industry norms while Democrats only scored 1 that way.

Black Lives Matter ﹣ In the wake of George Floyd’s death back in May, brands had an awakening along with everyone else. Since then, we’ve seen more advertisers willing to take a stand in support of Black Lives Matter. Out of the 12 Black Lives Matter ads tested in the last 60 days, Republicans scored nine of them unfavorably and only one favorably (Secret’s “Risk It All”) whereas Democrats scored four significantly above their industry norms and only three below.

Political messaging in ads tends to turn some Republicans off, but even within the segment there is disagreement on the matter with some showing support for the BLM movement and others doubling down in opposition. The most polarizing among Republicans was Vaseline’s “Beautiful Skin” where 39% assessed it in the highest Ace Score range possible and 35% scored it in the lowest. Those that scored it favorably appreciated the message, while those that opposed it found the ad divisive, pandering and/or took issue with the Black Lives Matter organization:

Republican, Male 21-35: “This ad does well in letting people know how blacks feel in the current situation of them not getting treated as they should. Absolutely relevant. Slave days are over yet it somehow does not seem like the hate is completely out the door.”

Republican, Male 36-49: “AWFUL!!!!! UNTRUE!!! Vaseline catering to a false ideology & taking a side. I will not buy the Vaseline lotion anymore. It’s the only Vaseline product I use. So disappointed. Awful misrepresentation of a demographic.”

Worth repeating, Secret’s “Risk It All” is an exception to the typically divisive nature of the Black Lives Matter theme. It rallied strong scores from both sides of the political aisle with its commentary on racial injustice. There was also very little polarity within the Republican segment as most agreed “Risk It All” was an effective ad.

Marketers and consumers should be inspired to see unity across the political spectrum even with ads that one might stereotypically assume favors one ideology over another. Social media and a 24-hour news cycle can amplify and exacerbate voices that seem to speak for a majority, even when they don’t. Our results from a nationally representative sample can and should encourage brands who want to speak out to do so without being discouraged by the perceived differences in attitudes and beliefs, particularly if they are communicating authentic values.

How Brands Are Serving Their Plant-Based “Meat” Ads