Unless you’ve been in the dark, you’ve heard about the solar eclipse of August 21st. The contiguous United States waited almost 40 years since the last total eclipse in 1979, and this time around, several brands were eager to latch onto the widespread excitement of this somewhat rare phenomenon. We wanted to take a look at whether it worked, and if it did, what “stars” had to align for solar eclipse tie-ins to be successful.

For our analysis, we reviewed the following brands with video ads:

(Note: We did not include Mitsubishi’s live feed, as it did not present as a video ad)

Considering only 6% of the U.S. population was within the path of totality, viewers appreciated most brands’ illustration of the eclipse. The visuals were key in most of the ads, rated single best thing for five of the seven. Denny’s one day deal of $4 all-you-can-eat pancakes outshone the “mooncake” visuals by a hair, and Warby Parker’s custom take on the classic “Total Eclipse of the Heart” song was most enjoyed by viewers of that ad:

Most of the brands tried to use quirky humor and/or “punny” approaches to the eclipse. Chiquita Bananas’ minute-long “Banana Sun Announcement” saw the highest level of emotional response, followed by Warby Parker. 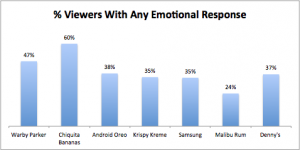 However, emotional response can be positive or negative. In reviewing the most frequently mentioned emotions by ad, we see that these brands evoking more humor than the others tended to be more polarizing – seeing quite a bit of “hate” emotion, along with “great” and “humor” (as is often the case with “quirky” humor).

In the chart below, the polarity percentile each ad ranks in is listed next to the brand name, with more detailed emo clouds below for the most polarizing ads. Food brands enjoyed far less hate emotion, as viewers responded in predictable fashion to food visuals and deals, with “great” and “yummy” emotions. Malibu Rum saw some polarity (not surprising for an alcohol ad) and Samsung saw little disagreement, having avoided the use of humor (quirky or not). It is important to note that for most of the ad, many viewers thought the Android ad was an Oreo ad – more information on that further down. 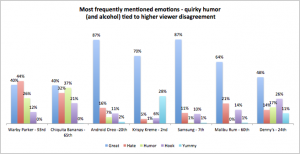 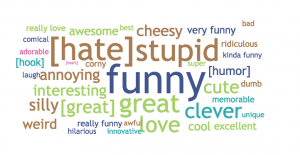 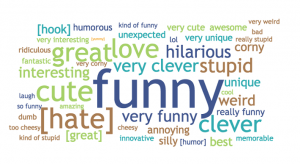 Obviously, the stunts attempted by these brands were attention seeking, with the food brands, Samsung, and Android Oreo winning on this count – and all in an overall likeable manner according to viewers. Warby Parker and Malibu Rum saw lower likeability among our gen pop audience (Malibu Rum was also rated below advertising norms for Attention, Likeability, and Watchability among spirits drinkers). 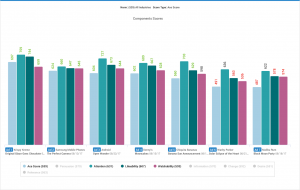 Krispy Kreme took the opportunity to introduce a limited time, all-new chocolate glazed doughnut, which earned them the rank of the most informative and different ad of the set. Denny’s announcement of its one-day pancake deal also earned high information scores. Android earned points for the uniqueness of its animated spot while Samsung’s straightforward message of being the “Perfect Camera” for a solar eclipse wedding (also a trending topic) won viewers as well. 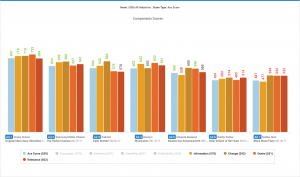 However, most of these ads, while entertaining, didn’t do much to drive positive purchase intent. Top 2 Box scores hovered near or below 50% for all, with the exception of Krispy Kreme – and for this ad, we’d wager the idea of a chocolate glazed doughnut far outweighed the cleverness of the eclipse tie-in. Malibu Rum Top 2 Box intent came in at 50% among spirits drinkers, while Samsung Top 2 Box did not exceed (but fell within the range of) recent Samsung ads–which, like Android, is expected for non-food ads. 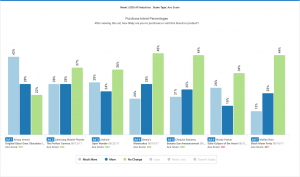 In the case of Android Oreo, the ad attempted to incorporate the name of its latest update, Oreo, into the eclipse and news of the release. Numerous viewers found the ad confusing, with second by second trace analysis showing a sharp drop off in engagement as the voiceover announces “Android Oreo has arrived” – even among tech adopters:

Moreover, Brand ID was muddled in the Android ad, and was also particularly low for Warby Parker, in which the brand was not identified until 1:32 into the 1:45 video. With attention spans seemingly getting shorter and shorter, unclear and/or later Brand ID runs the risk of low brand awareness if the ad is not aired in a setting in which the brand connection is obvious, such as the brand’s YouTube channel, website, or social media page(s):

Three brands (Krispy Kreme, Samsung, and Denny’s) were able to connect this cultural moment to their brand’s purpose in a relatable, relevant manner – with Samsung managing to accomplish this without mouth-watering visuals. These results confirm that stunts, hooks, and puns can be seen as clever by many and annoying to others. While they can help a brand grab attention and stand out, that is not guaranteed, and most do not drive brand success (purchase intent). Certainly some image/awareness halo can be achieved, but for most brands, strong product visuals, information, and in the case of casual dining, deals, still speak louder to consumers than the occasional stroke of the “pun.”