Ready or not, Back-to-School season is upon us. Office Depot was the first to remind viewers with its ad “Taking Care of Back to School” airing June 26th. That’s two weeks earlier than last year’s start on July 11th. Brands must have heard the good news reported by the National Retail Federation. It estimated a 10% increase in Back-to-School shopping this year compared to last. With the bulk of that spending taking place between late-July and mid-August, an earlier advertising start might be better than later.

As of August 4th, there were 43 Back-to-School ads, 81% of which were retail. Best Buy’s campaign starring comedian and actor Adam DeVine has the most ads so far this season. It includes eight humorous spots that highlight how Best Buy offers a variety of products that will enrich college students’ experiences. After Best Buy, Target has five colorful ads showcasing the breadth of products it has to offer parents. The ads convey how Target is a one-stop-shop, simplifying the chaos of back-to-school shopping for parents.

A majority of the ads focus on K-12, while only 11 are targeted towards college students. Interesting, considering the National Retail Federation projected almost twice as much in Back-to-College spending compared to Back-to-School for K-12. Perhaps brands are holding off on targeting college students as some universities don’t start until the end of September.

One thing is for sure, parents like deals on back-to-school shopping. Of the 22 ads featuring a deal or promotion, 9 of them made it in the top 10. The difference between the ads with deals in the top versus the bottom 10 is that most of those in the top used other creative elements, such as storytelling or attention-grabbing visuals, to create desire before or during the announcement of the sale offered. One example of this is L.L. Bean’s “The Chase,” which follows students as they enthusiastically head off on an adventure to do ‘homework’ in the outdoors. It ends with the subtle announcement of 20% off for Back-to-School shopping. Driving desire before value enhances parents’ perception of a brand and increases purchase intent. In other words, only offering a deal in your ads might not be enough to grab attention and resonate with parents and make it on their shopping list this year.

Top 10 Back-to-School Ads according to viewers with children at home:

Microsoft’s “Toney :30” comes in as the top Back-to-School ad so far this season. It scored 20 points higher than last year’s Microsoft ad, titled “College Students.” Unlike last year, “Toney :30” is narrated from a teacher’s point of view as he talks about how technology, specifically the Dell XPS 13 2-in-1, positively impacts his job. Among the general population, this ad was best received by Gen Z males, 73% of whom reported positive purchase intent. However, across all demographics, viewers noticed and liked the unique perspective in this Back-to-School ad.

Old Navy switched things up this school year and abandoned its celebrity strategy of three years. The dance sequence in “Back to School Breakdown: Ready to Make Some Noise with Old Navy” spotlights different products from Old Navy in a fun way that aligns with the brand’s image. The new strategy seems to be working — 44% of viewers with children at home reported they were ‘Much more likely” to purchase from Old Navy, the highest percent among the top 10 ads.

Fruit of the Loom has achieved the highest Breakthrough score among Back-to-School ads, with scores of  737 for Likeability and 777 for Attention. While the bonus pack deal was featured in the ad, 52% of parents rated the relatable and attention-grabbing visual scenes the Single Best Thing (pictured below). 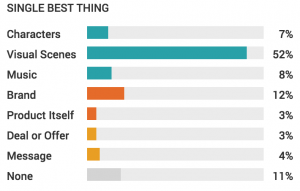 Celebrities and humor were two common characteristics among the bottom 10 ads, according to viewers with children at home. This comes as no surprise since time and time again, both of these things tend to be very polarizing in ads (not everyone will find something funny, just as every celebrity has their haters as well as their fans). When deals are the stars of back-to-school shopping, celebrities can’t compete. In Converse’s ad “First Day Feels – Converse x Millie Bobby Brown,” the scenes outshined the actress with 24% of parent viewers voting for ‘Visual Scenes’ as the Single Best Thing about the ad, and only 13% for ‘Characters.’ However, Gen Z and Millennials audiences, the target market for this ad, thought Millie Bobby Brown was relatable and made the ad entertaining to watch (despite its length of 1:00).

We still have a long way to go before Back-to-School season is through. That means more ads, and more insights. Stay tuned for a final analysis.