This week’s presidential debate saw several brands electing to take advantage of the anticipated large audiences by releasing new, politically themed creative.  While it isn’t necessarily unusual for marketers to create politically themed ads during an election year, there is nothing ‘typical’ about this election. We were curious to see how consumers felt about their brands becoming political in nature (to any extent), and found that most brands were able to capitalize on the broad audience, while some squandered the opportunity by being a bit “too” political.

Here’s a look at four brands that took the (expensive) risk, and an assessment of how it paid off.  In the table below, we report each ad’s results across a variety of performance criteria relative to the brand’s competitive category norms:

Brands that were able to make a clear connection between their politically-themed message and their brand specifically, while treading lightly into the political arena, enjoyed the greatest success from the spend. Emotionally stirring ads (inspirational and humorous) worked within these parameters. Those that dove into controversial, politically charged topics within the ad, even with attempts at humor, or merely “used” the election as a hook, fared the worst. Some further insight by ad:

GoDaddy, a brand that has both offended viewers and hit it out of the park with its offbeat humor and at times controversial creative, used the debate to debut a new election-themed campaign. The ad airing on Monday night, “The Election,” features a cartoon “GoDaddy Guy” stumping on the campaign podium, encouraging people to be the ‘president’ of their own ideas (seemingly by using GoDaddy).

“The Election” was the most polarizing (this ad was more polarizing than 93% of brand ads) and least successful among the branded, politically-themed ads of the debate we studied. Attention was not widely achieved, nor did viewers find the ad captivating enough to be relevant, informative, or even likeable.  Across genders and ages, viewers rated this ad poorly. The problem? Viewers found the political angle superfluous, with others expressing a strong dislike of the political bent, despite liking the deal/information offered:

Tecate Light aired a spot that featured a “Beer Wall” on the border of the U.S. and Mexico (actually filmed in the beer’s namesake town of Tecate). Quoted in Ad Age, brand VP Felix Palau indicated the debate placement was aiming for broad reach, but claimed the creative had no political intent; rather, it was merely “a story where people from two bordering countries are united by beer.” However, this spot was the most politically charged of the four we analyzed because it featured the highly charged issue of immigration.

“Beer Wall” grabbed attention, with viewers finding it watchable and entertaining, as indicated by the emo cloud below – viewers used “great” and “humor” words to describe the ad most commonly: 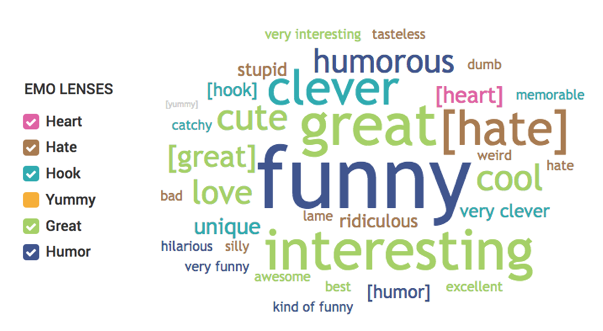 The ad’s best performance was seen among 21-35 year-old males, a key target for the brand, and received a relatively better reception among beer drinkers. However, there was some viewer disagreement on the creative with some objecting to the lighthearted take on a serious topic facing America, while others enjoyed the spoof.

More importantly for Tecate, the ad seems to have missed an opportunity given the spot’s wide reach, as only 56% of those viewing recalled the Tecate brand itself (unaided). Perhaps the integration of such a politically charged issue (immigration), distracted viewers to the extent that the wall pulled viewer focus away from the advertised brand. Despite these caveats, this ad was Tecate Light’s best performer since March of 2015.

Audi, in contrast, debuted “Duel,” a highly creative, politically-oriented satire featuring a fight between two individuals replayed in reverse, with the cause of the duel only revealed at the very end of the spot – the chance for the two valet attendants to drive the Audi. In the spot, there are visual references to the current election environment, but the storyline itself was largely apolitical.

“The Duel” also took great advantage of the large audience but managed to keep the brand foremost in viewer minds – with viewer verbatims indicating that the creative effects made for a riveting and highly memorable spot, overtaking (in fact, seemingly discounting) any subtle political overtones present in the ad:

“Duel” ranks third in its Luxury Automotive category for its attention-grabbing abilities year-to-date.

The clear winner of Monday’s ad “debates” was Jeep – with a patriotic and inspirational spot, “Free to Be,” that successfully linked its message of unity despite diversity very solidly with the Jeep brand. The ad ranks in the Top Ten (year-to-date) Non-Luxury Automotive ads for overall performance, likeability, relevance, viewer agreement, and creating desire. Posting nothing but positive viewer emotions (see right), this ad featuring Cat Stevens music represents a true “seek and share” ad that viewers express a desire not only to seek out and watch again, but to share with their circles of influence.

Viewers not only bonded emotionally to the message, they also (importantly) clearly tracked the connection to the Jeep brand itself: 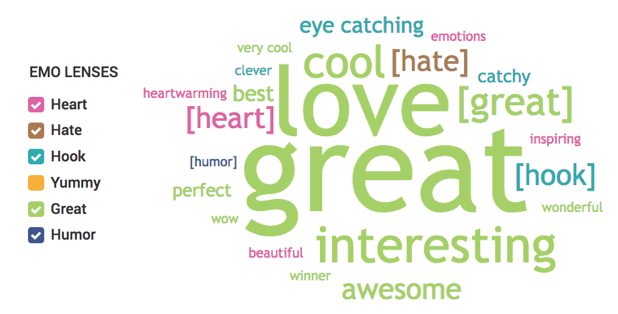