What came after seems like it surprised the brand, which erased any sign of the campaign after social media backlash ensued. However, our data indicates Kraft could’ve seen this coming with a simple PRE-test and the inclusion of comparative insights.

As the average modern family evolves, so do family-friendly brands. We’ve seen Kraft Mac & Cheese flirt with the boundaries of what makes it wholesome in an attempt to relate with Millennial and Gen X parents. For example, its daring “Swear Like a Mother” campaign from 2017 tapped into consumer psyches about the stress of trying to be a perfect parent and the occasional swear word that slips out in front of one’s kids:

This effort was a success garnering over 4.5 million views, 70 million social impressions, and 769,000 likes, comments and retweets in its first 9 days. There’s also still evidence it existed, unlike “#SendNoods.”

The tongue-in-cheek humor of Kraft’s “#SendNoods” ad tied into a digital age phenomenon that skews towards a younger, 18+ demographic. As a result, the humor landed best with viewers ages 21-35, as it intended, but evoked less ideal emotions as well (Inappropriate, Incredulous, WTF). However, it was older viewers with likely more traditional worldviews (ages 50+) where emotional reactions were overwhelmingly negative with no sign of humor in sight:

These emotional responses were reflected in our traditional metrics. The most damage was done among the oldest demographic where positive Purchase Intent (19%) was surpassed by negative (23%):

Viewers that connected with the humor in “#SendNoods” felt more favorable about Kraft Mac & Cheese. Top-box Purchase Intent (“Much More Likely”) outperformed norms among viewers ages 21-35 and 36-49. However, it took away from more lukewarm positive intent (“More Likely”), which was significantly below norm for both demographics. On top of that, those that felt offended also showed their dislike in the form of above norm negative Purchase Intent (“Less”/“Much Less”):

The concept in “#SendNoods” had potential as indicated by some light positive emotional signal (Funny, Ingenious, Love It) and the average top-2 box Purchase Intent among younger demographics. It’s the execution that fell flat. In addition to offending, confusion and annoyance were evident in viewer verbatim comments with some unsure of what Vanessa Bayer was saying (News? Nudes? Gnu?) or finding it repetitive and too long/overdone: 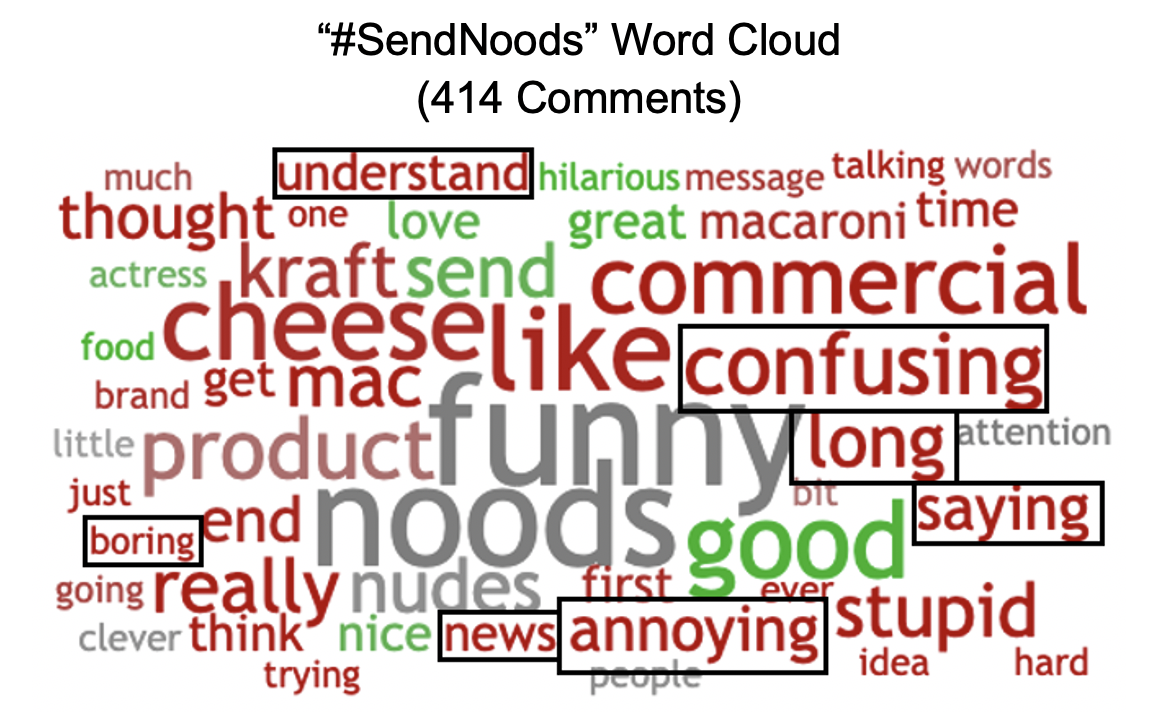 “That commercial was honestly way too long for what should have been a 15 second spotlight. Also who calls noodles noods? The attempt to be edgy was trying way too hard.” Female 21-35

“You might get a chuckle for the first second. But then you beat a dead horse with the same joke for way too long without building on it at all.” Male 36-49

“Completely confused. Couldn’t understand what she was saying. Sounded like she was saying “news”, not “noods”. Was not funny, just got irritated with her repeating herself so much.” Female 50+

“This ad was just surreal…talking about nudes does not make me want mac n cheese. It was especially weird since Kraft mac n cheese ads are usually aimed more at kids.” Male 21-35

The annoyance and confusion expressed in viewer verbatim comments about “#SendNoods” is also evident in our Second-by-Second Trace Chart. At 0:23 “Swear Like a Mother” started to build stronger engagement as the mother used witty, PG-rated replacements for curse words, like “son-of-a-motherless-goat.” At the same point in “#SendNoods,” viewer resonance dropped unusually low as she continued to repeat “noods, not nudes” for the rest of the ad — a sign of weakness in the execution:

Kraft also took a risk with its “Swear Like a Mother” campaign. The edgy spot was more polarizing than norm, but to a lesser extent than “#SendNoods.” The Mother’s Day themed ad also resonated much more positively as shown by the size of the green (highest range of scores) and red (lowest range of scores) bars in the Polarity Charts below:

Funny signal was significantly greater for “Swear Like a Mother,” which scored in the Strong band of signal — it is quantifiably funnier than 99% of all ads. Meanwhile, “#SendNoods” falls in the weakest band of signal, which is still impressive considering 75% of all ads don’t score on Funny. However, it shows the humor in “#SendNoods” was not widely, nor well, received: 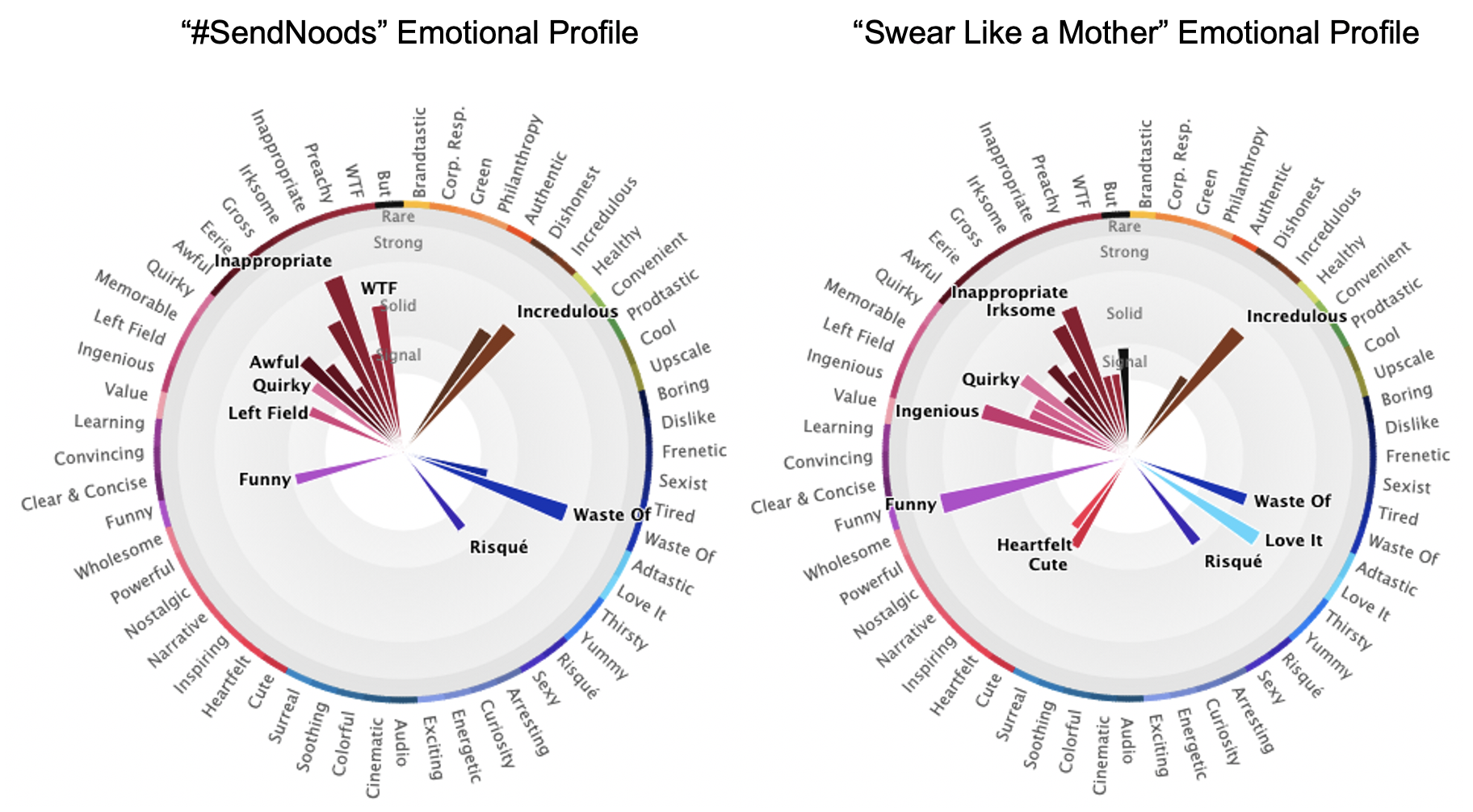 Moreover, the highest scoring emotions for “#SendNoods” were all negative (Inappropriate, Waste Of, Incredulous, WTF) and reflected issues with the concept and execution. “Swear Like a Mother” evoked some of those same emotions, but signal was weaker and it was balanced out with positive ones like Funny, Love It, Ingenious, Cute.

Understanding the risks and rewards of a message before it ever airs can have a massive impact on its success (or failure). In the case of Kraft Mac & Cheese’s “#SendNoods,” our data indicates there was a strong risk of offending certain consumers. On top of that, small post-production tweaks could have enhanced the messaging among other viewers that were either confused or annoyed, therefore lessening the negative impact of the ad.

However, it wasn’t all bad. Our data also suggests that “#SendNoods” had some huge fans among younger segments that connected with the humor in a way that reflected positively on the product and translated into real world results. Kraft Mac & Cheese sold out of the campaign’s 7,000 meal kits in 28 minutes.

With these insights pre-launch, Kraft could’ve measured the risks and rewards of its campaign, as well as made tweaks to mitigate some of that risk.