Super Bowl Ad Facts to Prepare You for the Big Game

Less than two weeks before the Big Game and while many here in Silicon Valley are lamenting what could have been, we’re still beyond excited for the real game – the one that happens between plays, that is.

This is our fifth Super Bowl at Ace Metrix, which means we have four years worth of ads scored by Americans. That’s more than 200 ads that brands pour their hearts and budgets into making just perfect for the year’s largest advertising stage. Think about it; with 200 ads (not including movie trailers, which we will also score this year), we are talking about $700 million in media spend. That’s a lot of guacamole.

Allow me to share just a few of the datapoints, trends and themes we’ve collected over the years when comparing these ads to each other – and to the other 30,000 ads in our database. And before you head off to search for the perfect buffalo wing recipe, download our Super Bowl Infographic.

Doritos (Slingbaby) and M&M’s (Just My Shell) tie for the highest scoring Super Bowl ad of the last 4 years – both earning an Ace Score of 671 in 2012.

Of repeat advertisers*, Pepsi and Doritos maintain the highest Average Ace Scores for their ads.

In recent years, the scores, on average, have remained constant (save a lower performing set of creative in 2010); however, the total number of ads has decreased based on a trend toward longer format spots. 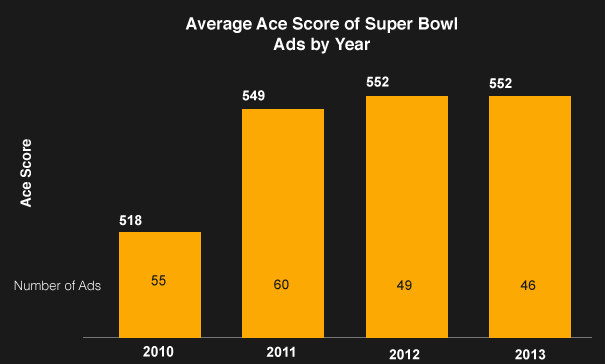 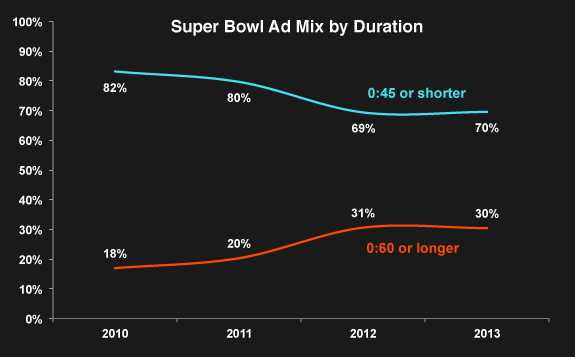 Humor remains the most leveraged attribute for this stage and is employed in approximately 68% of Super Bowl ads and, interestingly, the number of ‘funny’ ads remains fairly consistent year-to-year.

Doritos is well known for its effective use of humor in Super Bowl ads. In fact, the brand has captured at least one, if not two, spots in the top five for the past four years. 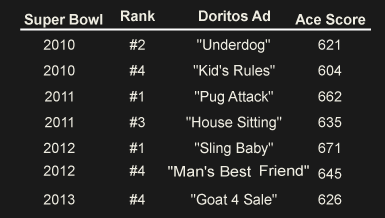 Judging from the brand’s top candidates for 2014, we’re likely to see Doritos among the top performers this year as well.

Some brands, however, attempt to use humor and miss the mark. We’ll cover those in our Post Game Huddle on February 6th. Register here to join us.

Big Game advertisers are notorious for doubling down on their bets by including celebrities – and more often a montage of celebrities, perhaps in the hope of including enough variety as to reach each of the viewing demographics. The Mercedes “Soul” ad from 2013’s event is a classic example, featuring Willem Dafoe, Kate Upton and Usher. But do celebrities create the return for an already exorbitant buy? 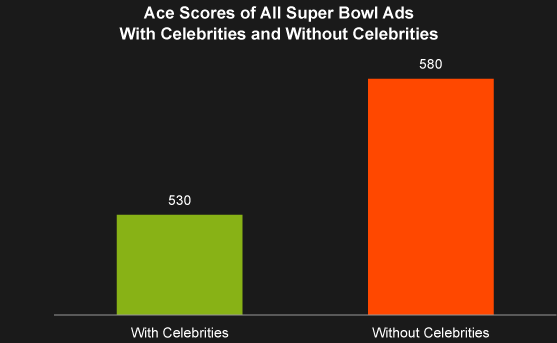 It turns out, of all the Super Bowl ads tracked since 2010, ads with celebrities scored about 3% below those without the stars. Now, 3% doesn’t sound like much, but it is when you consider this: Budweiser is rumored to have spent $3 million alone on the services of  Arnold Schwarzenegger. Add that to the price for Don Cheadle, Reggie Watts and the llama. All for the opportunity to start the game 1.5 points in the hole (3% * the total score in the past five games for those who are into the bookmaking thing).

Meanwhile, Budweiser’s most effective ads, and those with the most demographic appeal – an important consideration for the diverse Super Bowl audience – are the beloved branding ads featuring the Clydesdales, who probably don’t come cheap – but likely less than $3 million a pop.

And we haven’t even scratched the surface. We’ll cover more on this topic during the Post Game Huddle too. Plus we’ll dive into these topics:

Register for the Webinar.

One more thing! Think you know which brands are sure to have the best ads? Enter our Big Game Ad Showdown for your chance to win an iPad mini.