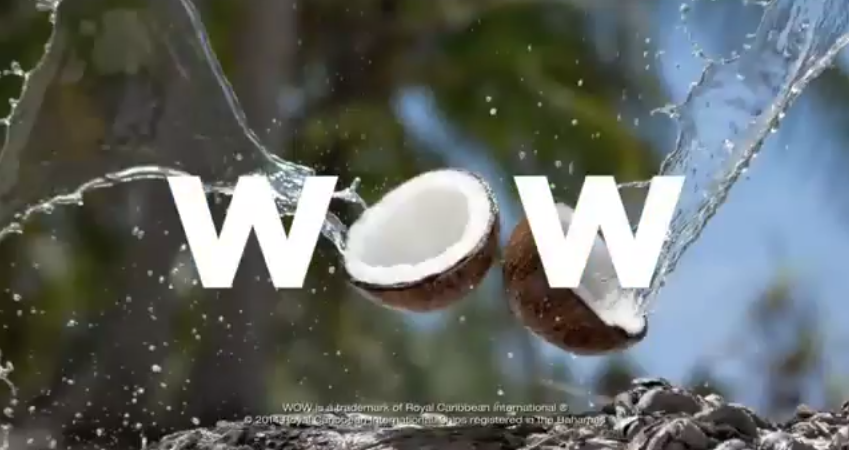 Carnival, Princess and Celebrity Cruises have now pledged to spend more than $60 million in TV advertising. Our data indicates that now is a great time to get back in front of consumers with Cruise Line messaging. Of the nine ads that we have scored so far in 2014, all nine have a minimum of 50% of respondents indicating they have never cruised with the company advertising but would consider the purchase of a cruise after seeing the ads. Emotional Sentiment scores, which are measured based on consumers’ verbatim responses, are also up 5% over 2013—a strong indication that any past mishaps are soon, if not already, forgotten.

With Cruise Lines diving back into TV advertising in an effort to bring consumers back to cruising, we’ve identified three key drivers of successful cruise advertising.

For the purposes of the analysis below, Ace Metrix tested Cruise Line ads against both the General Population of 500 consumers as well as an augmented sample of consumers with an income over $75K.

Royal Caribbean and Norwegian Cruises have each aired a creative that is in the top 1% of all ads in our database, which contains over 33,000 tested ads dating back to 2009. Each ad shows scenes of people having the time of their life on vacation.

Interestingly, in Royal Caribbean’s spot, the voiceover does not begin until the :30 ad is nearly over—a notable element that is further explained in point #3 below. However, despite the lack of voiceover, it is clear from the combined word cloud below that the theme of “fun” resonated with consumers. Fourteen percent of the optional verbatims even mentioned that the ad made them “want” to go on a cruise or book their trip now. 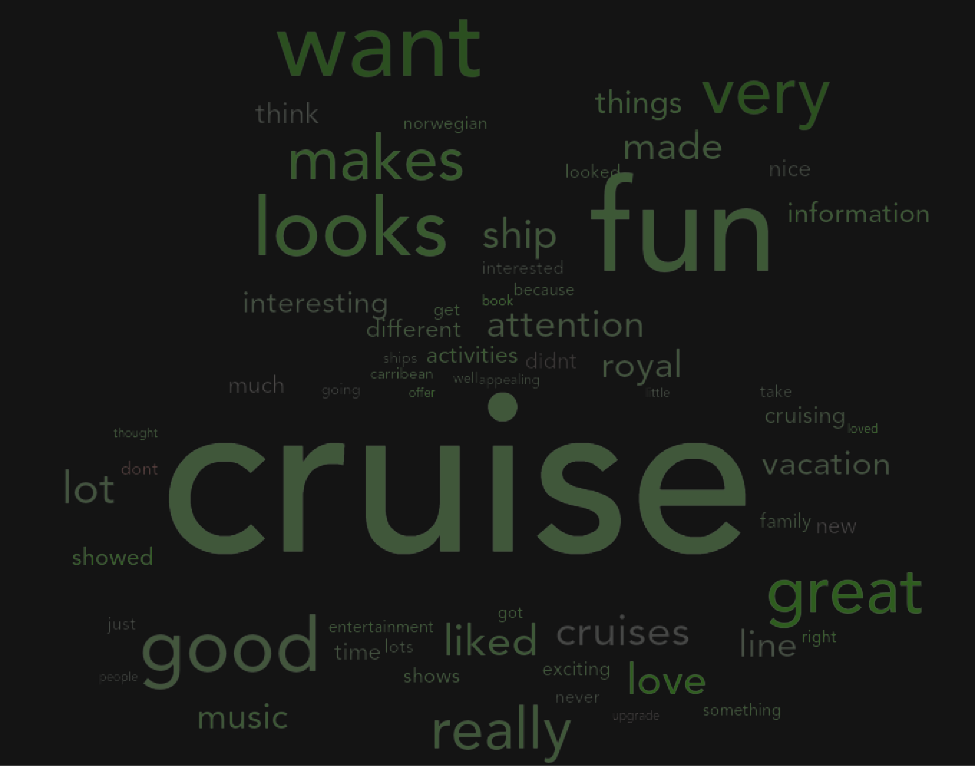 Our data suggests that ads that simply mention the word “fun” are more effective on an overall Ace Score basis as well as relative to Emotional Sentiment. Spots that focus on memory-making (so a look back at the cruise already taken) do not score as highly as those that focus on the present- day Cruise experience. Ads showcasing the ship’s outdoor activities, shows, and food allow consumers to imagine themselves on the boat enjoying a vacation.

2. Skip The Promotion (or at least don’t make that the focus)

While there are certainly examples of Cruise Line ads that perform very well in market and also include a promotion, in examining the data on an overall basis, including a promotion does not in and of itself make the creative any more effective. Approximately 27% of all cruise ads included a promotion. On average, ads that attempt to entice consumers with a deal or contest score about 4% below the average Cruise Line ad. Desire, Persuasion and Emotion all suffer in ads that feature an offer. 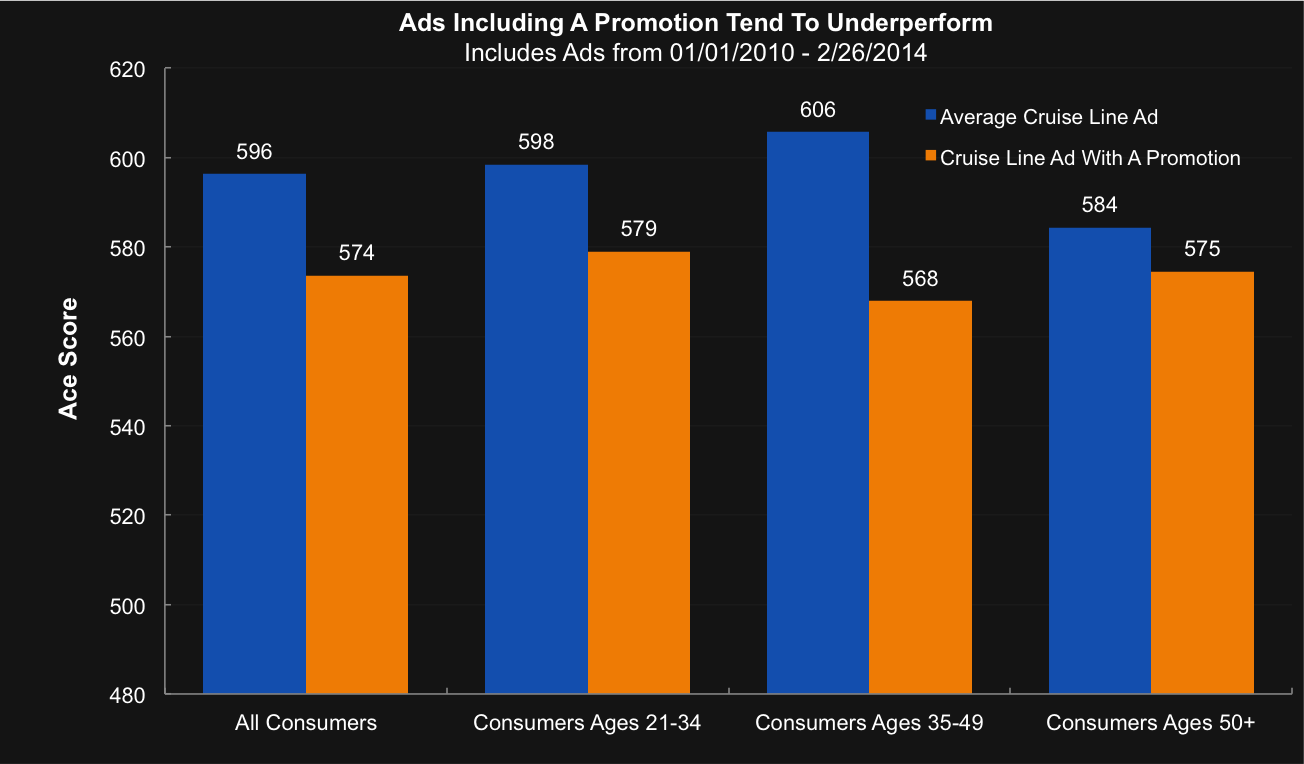 There are multiple paths to creating great television creative and creating strong emotional connections is certainly one that if done well, can be incredibly effective and persuasive with consumers.  While Cruise Lines have been holding their TV advertising in port for the last few years, ocean tragedy has still hit our news feeds. Creating an emotional connection with consumers has been a way to help them forget the past and can serve as a welcomed reminder to wannabe-voyagers as to just how delightful a cruise can be.

According to our data, ads with a high Emotional Sentiment Index (ESI) are often those that feature energetic, fun activities rather than slow, sappy memories.

Royal Caribbean just launched an ad that sailed into our database with an Emotional Sentiment  score of 84, 38% above the category average.

Consumers were “wowed” by all the fun activities Royal Caribbean offered—there was something for everyone and therefore the ad had broad appeal and could be appropriately run on a variety of different networks and programs.

Along with active visuals, the music in an ad can also positively influence Emotion. Thirty-two percent of the ads tested opted for a strong musical presence instead of long voiceovers or dialogue. The chart below shows that music-based Cruise Line ads tend to have a 16% higher ESI than those ads that are more voiceover-focused. 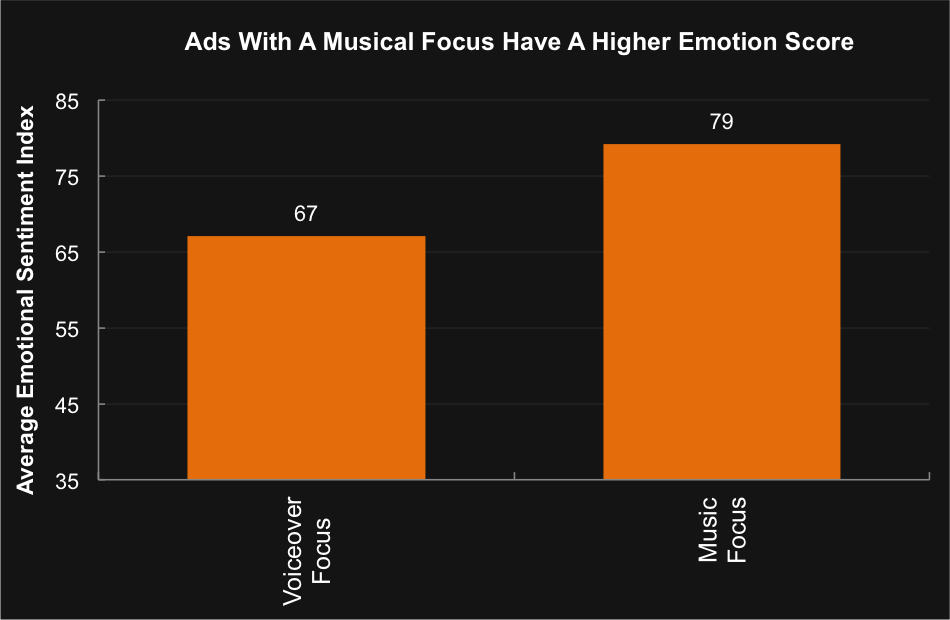 While data can help with creative development and media planning, each individual ad tells its own story. As Cruise Line advertisers begin to embrace TV advertising once again, we have more data that stresses the importance of knowing which spot plays best to which demographic and whether a :15, :30 or :60 has the biggest payoff and efficiencies.

With 500 General Population respondents scoring every nationally breaking ad within 24 hours of its airing, we have complete analytics packages that include over 12k data points for every ad as well as an average of 300 verbatim responses to provide qualitative support to the data. Because we test every breaking ad (client or not) in a category as competitive as yours, we are able to help you keep an eye on all cruise advertising in order to help you understand what works, what doesn’t, with whom, and why. Real time analytics could be a useful asset as you look to either pre-test your creatives, understand your targets in real time, benchmark against your own portfolio or the larger competitive set, or make on-the-fly adjustments to weighting and rotation to maximize in market impact.

Let’s start a conversation on how Ace Metrix can help ensure your creative is effective and resonates every time.

Samsung Tastes the Sweet Glory of a Double Double