Each month YouTube posts an Ads Leaderboard consisting of the ten most popular paid ads uploaded during the prior month. More and more these “ads” are more like feature films for brands – content you would not expect to see repurposed for television or another ad vehicle. Still, we like to take those pieces that are true ad creative and see how effective it is according to the general population.

YouTube views are inherently self selected – meaning those people chose to watch it. To be among the top ten of all ads viewed online in a month is a great achievement and speaks to the ability for that ad to resonate with a particular audience.

Ace Metrix scores are based on how everyone would respond to the ad, providing actionable data to marketers contemplating placing their online ads more broadly, digitally or in front of a television audience. To be both among the top viewed ads online and achieve a top quintile Ace Score or high Emotional Sentiment index is the remarkable confluence of great viral appeal and broad demographic appeal.  Here are three of the most popular YouTube ads for March.

OLD SPICE SHAVING: “Get Shaved in the Face”

Old Spice is no stranger to the leaderboard landing three places on boards over the past year; most recently Mom’s Song ranked 4th on January’s leaderboard.

In fact, prior to leaderboards, Old Spice turned out many YouTube sensations dating back to the 2010 “Man Your Man Could Smell Like” spot that has earned more than 48 million views. This iconic ad earned an Ace Score of 563 and appealed a bit more broadly to women – a trend for the soap ads versus the highly targeted shaving ads.

“Get Shaved in the Face” is the top performing Old Spice shaving ad we’ve scored in the past year. Old Spice is notorious for towering Attention scores and this ad continues the trend despite its :60 format. Strong Information and Change scores indicate the product message is getting through however, below norm Relevance and Desire scores may disappoint the brand. Entertaining of course is at the heart of advertising, but without the intention to purchase the ad should likely stick to online.

The data tells us that Terry Crews is appreciated more by men than by women – as illustrated by the comparison of this latest Crews spot and the aforementioned “Man Your Man Could Smell Like” which featured Isaiah Mustafa. 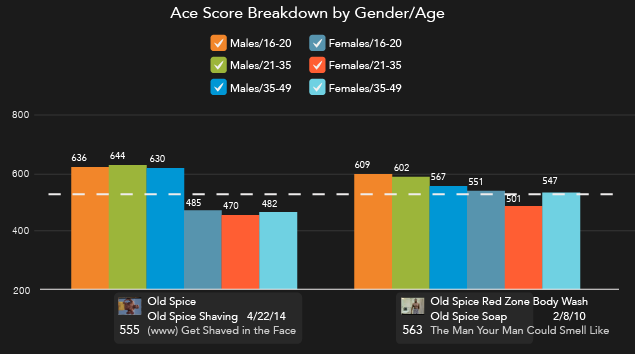 Of the 364 verbatim responses collected for “Get Shaved in the Face,” 31% found the ad “funny”.

Interestingly, when comparing the more recent ads such as “Get Shaved in the Face” and “Mom’s Song” to older ads such as “The Man Your Man Could Smell Like” mentions of the brand “Old Spice” has significantly diminished from 15% to 9-10%. In addition, respondents using the words “Old Spice” scored the ad on average 100 point lower in the recent commercials than those mentioning the brand in the older ads.

CHANEL: “She’s Not There”

Good news for Chanel – women found this ad most appealing and women 21-49 scored it above norm. That’s likely who’s tuning in to YouTube to watch the ad; women already familiar with the brand. Females awarded the ad strong Likeability, Attention and Change scores. More importantly, Desire scores were 11% above norm indicating the ladies “want that”.

Through our survey of 500 consumers, 357 left an optional verbatim response and 227 of them were women. Three percent noted the :60 ad as being too “long” or “boring”. Likewise, just 5% noted the brand “Coco”.

Music played a starring role in this ad with 12% of the women respondents noting the music in a positive way even if they scored the ad low. Surprisingly few people called Keira Knightley by name (2), and two others misidentified her as Natalie Portman. Still, not many identified her as an actress or celebrity, but rather focused on the mysterious, “James Bond” like scenes. So where we typically see celebrities creating a polarizing effect on an ad – with some loving and some hating a particular person, Keira’s presence as anything other than a beautiful woman had insignificant impact to the scores.

Taco Bell’s introduction of breakfast foods has been the talk of the town but this ad further illustrates the brand’s plan of attack: McDonald’s. Earning the 7th position on the list of most viewed ads for March, this ad is the top performing of the breakfast campaign.

Taco Bell introduced three ads featuring regular folk who share the competitor’s famous name, each performing above the QSR 90 day norm of 576. This ad, like the others, earned strong Change scores along with high Attention and Likeability but failed to reach the norm on Relevance and Desire.

The ad appealed broadly across age and gender breaks with the youth scoring it best next to females 36-49. The same demos awarded it the strongest Desire scores. 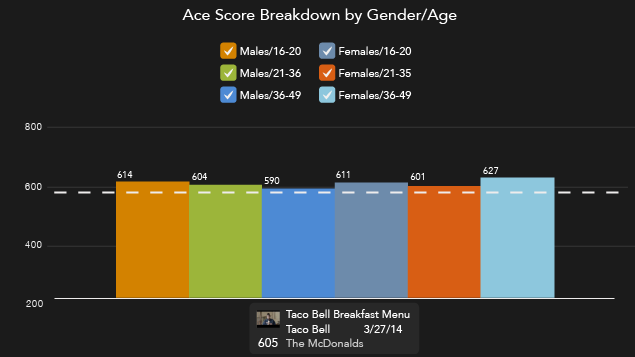 The ad elicited 342 optional verbatim responses, of which 18% discussed Ronald McDonald, 14% mentioned breakfast and 16% mentioned Taco Bell by name – a strong brand endorsement considering how many times the words Ronald McDonald were actually spoken in the spot.