Samsung Tastes the Sweet Glory of a Double Double

For those of you on the West Coast who have ever had the pleasure of biting into one of In-N-Out Burger’s famous Double Doubles, you know a bit about what Samsung must feel like today. For the second week in a row, Samsung has won both the title of Category Overachiever and Highest Ace Score for our Ad of the Week.

The ad, “Water Resistant,” earned an Ace Score of 739, which is 32% higher than the 12-month Mobile Devices category norm. We have a feeling that Samsung already knew it had a high-scoring winner on its hands since AT&T aired an ad last year featuring the “whatever-proof” quality of the Galaxy S4.

While Samsung’s winning ad last week, “Makes Everyday Better,” focused on the new Galaxy 5S’s myriad of high-tech functions, “Water Resistant” hones in on just one. And yes, the ad’s title does give it away.

Every gender/age demographic scored this ad over 700, which is a feat of itself. However, this ad does skew slightly older and female. Women ages 21-35 awarded the ad a score of 772, the highest score of any gender/age group 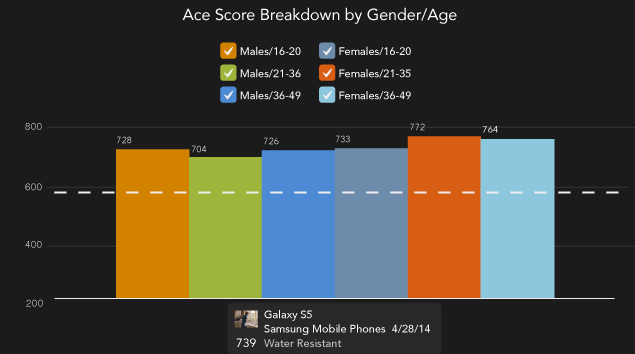 Only a handful of ads have ever  achieved 700 scores across all six Persuasion components. This ad’s scores for Information and Relevance particularly stand out at 23% and 25% above the category’s norms, respectively.

From reading the verbatims, it is obvious just how relatable the scenes in this ad are. Of the 311 optional comments left for this ad, many consumers recounted stories of what happened when their previous phone got wet.

With the debut of “Water Resistant,” Samsung has found the key to creative that is both relatable and informational, even adding a splash of humor.

The Pepsi Generation Is Still Alive and Dancing!